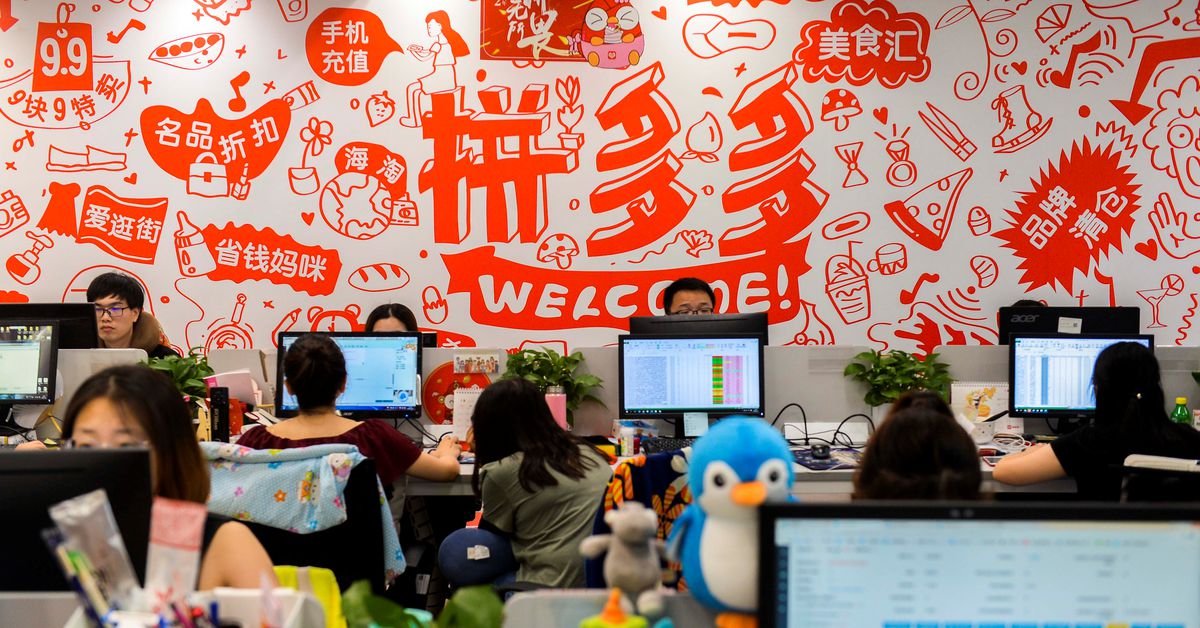 People are seen at their desks at the headquarters of Chinese online group discounter Pinduoduo in Shanghai, China July 25, 2018. Picture taken July 25, 2018. REUTERS/Stringer

HONG KONG, Nov 25 (Reuters Breakingviews) – Pinduoduo (PDD.O) stormed onto the scene by going hard at Alibaba (9988.HK), but its larger rival’s struggles are unlikely to be of much use now. Following policy crackdowns and rising costs, the smaller Chinese e-commerce company has lost nearly 40% of its market value over the past six months and is expected by analysts to swing back to an adjusted quarterly operating loss . New boss Chen Lei would benefit from looking beyond farming for growth.

A meteoric rise helped $102 billion Pinduoduo overtake Alibaba by one measure last year, as it reached nearly 800 million active users. When Pinduoduo unveils third-quarter results, planned for Friday, sales are forecast to have increased 87% from a year earlier, according to estimates compiled by Refinitiv. More good news could be hard to find.

While Alibaba is subsidising merchants and sacrificing revenue to placate Beijing, Pinduoduo instead may have milked customers to wring more out of them for ads and beyond. Complaints from some vendors have surfaced on social media saying that they’ve been asked to either cut prices or pay more for customer traffic.

That risks attracting more regulatory attention in the age of common prosperity. And unlike JD.com’s (9618.HK) mostly self-sufficient operation, Pinduoduo’s marketplace model already resembles Alibaba’s in ways that are irritating Beijing. Alibaba’s steeper-than-expected slowdown partly reflects those concerns. Pinduoduo could be even more vulnerable: it banked on consumers referred from Tencent’s (0700.HK) WeChat app, but such exclusive arrangements are being shaken up by new policy initiatives.

Increased competition threatens profitability. Pinduoduo’s sales and marketing costs are seen climbing by 50% after a brief plateau. General expenses, including at least $1.5 billion pledged for agricultural initiatives over time, are also expected to soar and without any obvious return in sight.

All eyes will be on its grocery division, Duo Duo Grocery, for signs of progress, but new restrictions on subsidies could lead to disappointment for the fledgling operation. Alibaba’s diversification into cloud computing, Southeast Asia and beyond ultimately may provide some cushion. Chen’s challenge will be to dig up fresh places to invest to justify Pinduoduo’s premium valuation.

– Quarterly revenue at Chinese e-commerce company Pinduoduo is expected to grow 87%, to 26.6 billion yuan ($4.2 billion), from a year earlier, according to analyst forecasts compiled by Refinitiv. Its adjusted operating loss in the three months ending Sept. 30 is expected to widen from a year ago, to 617 million yuan, after generating a profit in the previous quarter.

– Pinduoduo plans to report its latest financial results on Nov. 26.