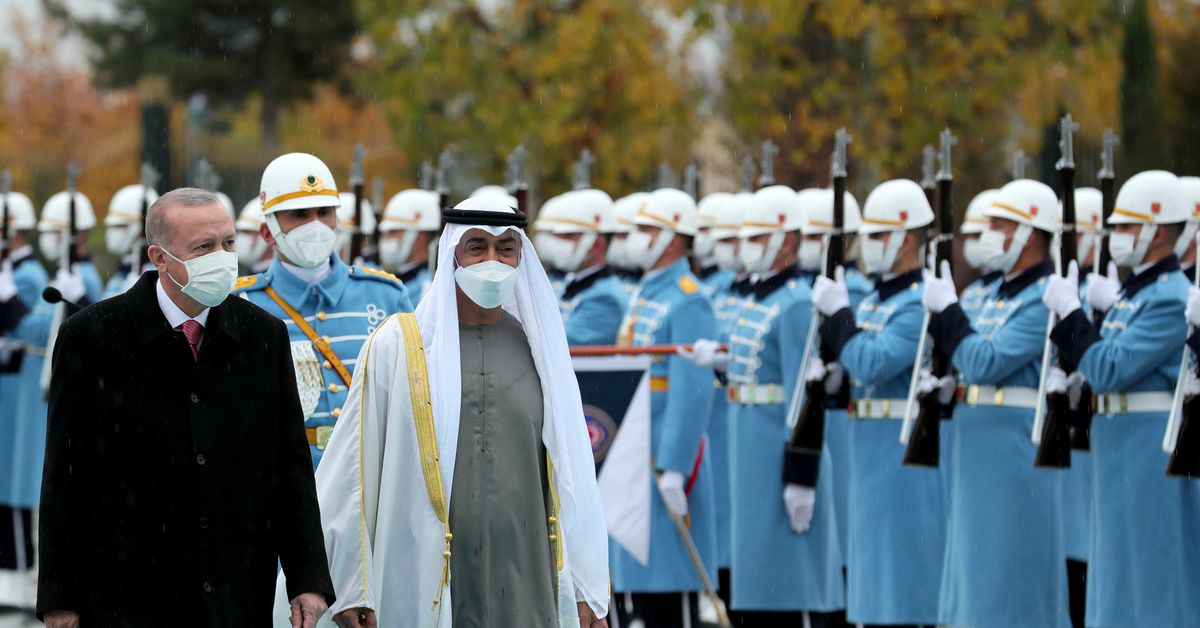 ANKARA, Nov 24 (Reuters) – Turkey and the United Arab Emirates signed accords for billions of dollars of investments on Wednesday, including in technology and energy, after talks between President Tayyip Erdogan and Abu Dhabi Crown Prince Sheikh Mohammed bin Zayed al-Nahyan.

Sheikh Mohammed’s visit to Ankara, the first in years, comes as the two countries work to mend frayed ties and amid a currency crisis in Turkey. read more

The memorandums of understanding were signed between the Abu Dhabi Development Holding (ADQ), Turkish Wealth Fund (TVF), and the Turkish Presidency Investment Office, as well as with some Turkish companies.

The agreements highlight the countries’ pivot towards partnership after a battle for regional influence since the Arab uprisings erupted a decade ago. The disputes extended to the eastern Mediterranean and Gulf, before Ankara launched a regional charm offensive last year. read more

Sheikh Mohammed said he had had “fruitful” talks with Erdogan on strengthening bilateral ties.

“I look forward to exploring new cooperation opportunities to benefit our two nations and advance our mutual development goals,” he said on Twitter.

ADQ signed an accord on investing in Turkish technology firms and establishing a technology-oriented fund, while Abu Dhabi Ports signed a deal on port and logistics cooperation.

A deal between ADQ and Turkish company Kalyon on energy and infrastructure, another with CCN Group on health cooperation, and a third with Turkey’s Presidency Investment Office on renewable energy were also among the agreements, a Turkish official said.

“Problems with the UAE are now behind us. We are entering a period based fully on cooperation and mutual benefit,” said another official familiar with preparations for Wednesday’s visit, and added the UAE investment would ultimately be in the billions of dollars.

The UAE announced a $10 billion fund to support mainly strategic investments in Turkey, including in the health and energy fields, its state news agency WAM said. read more

The Turkish and Emirati central banks also signed a cooperation agreement on Wednesday. Earlier, two sources said they were holding talks about a potential swap agreement.

Turkey’s central bank has previously sought swap deals with other countries as a source of hard currency to build reserves and support the lira, which has lost as much as 45% this year.

Turkey said in September it was in talks with the UAE over investments in energy such as power generation.The UAE, whose sovereign wealth funds have made significant investments in Turkish online grocer Getir and e-commerce platform Trendyol, has said it seeks deeper economic ties with Ankara. read more

Turkey, at odds with several regional powers as well as its Western allies over various issues, has launched similar normalisation efforts with its rivals Egypt and Saudi Arabia, though those channels have yielded little public improvement.