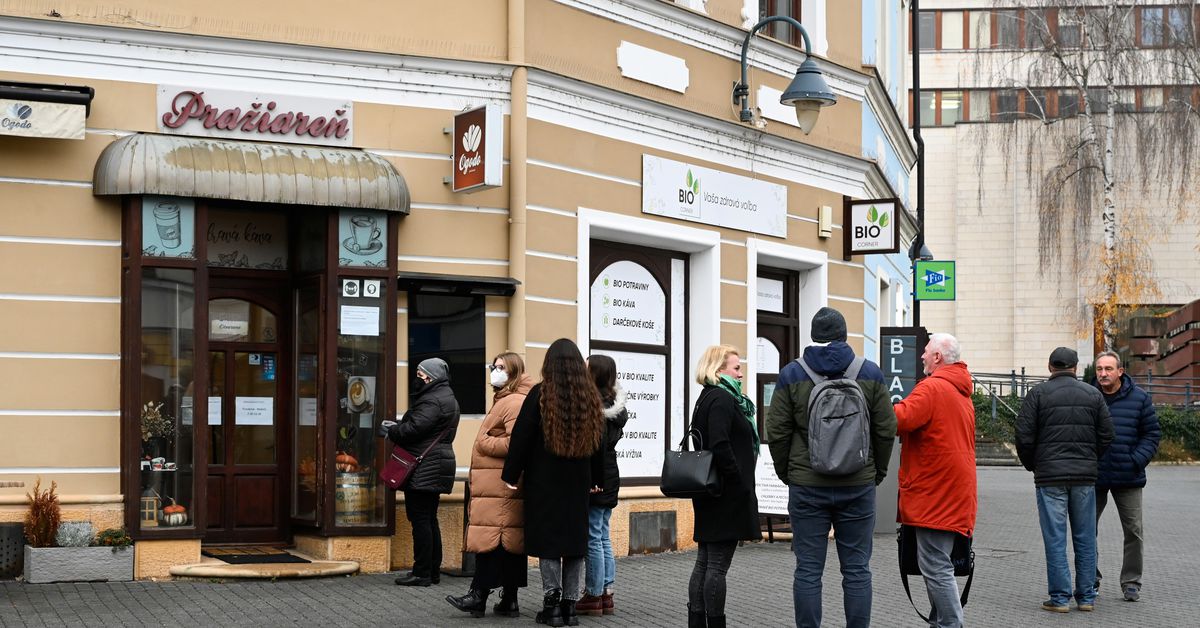 TRENCIN, Slovakia, Nov 25 (Reuters) – Slovakia went into a two-week lockdown on Thursday, as the country with one of the EU’s lowest vaccination rates reported a critical situation in hospitals and new infections that topped global tables.

Slovakia, a country of 5.5 million, ordered all but essential shops and services closed and banned people from travelling outside their districts unless going to work, school, or a doctor. Gatherings of more than six people were banned.

The decision comes as coronavirus cases surge across Europe, making the continent the centre of the pandemic again, and follows neighbouring Austria which started a lockdown on Monday.

Only 45.7% of Slovakia’s population is vaccinated, the third lowest rate in the EU, compared with 65.8% across the bloc as a whole, according to the European Centre for Disease Prevention and Control (ECDC). With 1,929 average daily cases per million population over the past week, it has the world’s highest incidence rate according to Our World in Data.

Tomas Sulik, head of the intensive care unit at the Trencin University Hospital, said he had nine patients at the 10-bed unit, and expected the last to be filled within hours. All nine patients, with an average age of 63, were unvaccinated.

“There is a sense of frustration. These are conditions that could be averted by vaccination,” Sulik told Reuters. “This wave is more intensive, the rise in patient numbers has been much steeper, and the age composition is moving toward younger patients.”

Exhausted staff were quitting, including four doctors who left since the last wave.

Elsewhere in Trencin,a city 130 km (80 miles) north of Bratislava, musical instrument shop manager Roman Spatny said his income was tied to sales and would vanish with another Christmas season lost to lockdown.

“For us this is a plain knife in the back. We have to be closed at a time that business-wise is the most important for us, same as last year,” he said.

Student Natalia Paskova, 17, saw little choice: “The situation is getting worse so the decisions are justified,” she said.

Hospitals have reached the limit of 3,200 patients which the government said was critical to maintain care. The health ministry has said it had started discussing possible help abroad.