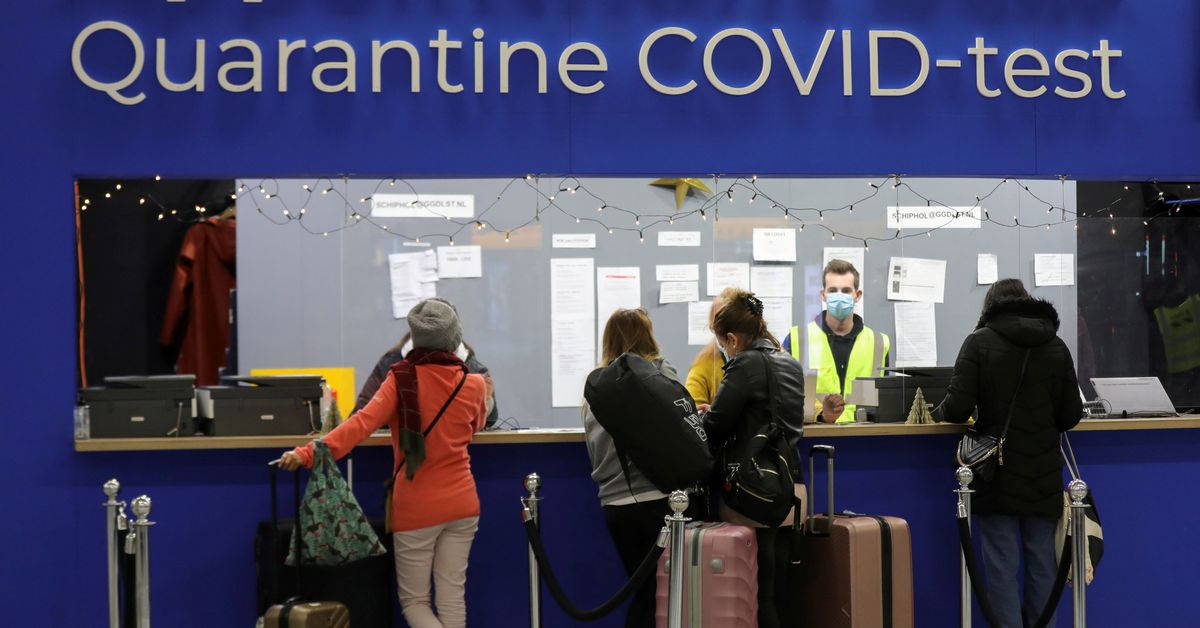 AMSTERDAM, Nov 27 (Reuters) – Dutch health authorities said on Saturday they had detected 61 COVID-19 cases among people who flew from South Africa on Friday and believe at least some infections are of the new omicron variant.

The cases were discovered among 624 passengers who arrived at Amsterdam’s Schiphol Airport on two flights on Friday before the Dutch government restricted air traffic from southern Africa due to concerns over the variant. read more

“In a number of the tested persons the omicron variant is presumed to have been found,” the Netherlands Institute for Health (RIVM) said in a statement. An RIVM spokesperson said it was “almost certain” the cases were of the new variant, but further testing was needed to be absolutely sure.

The RIVM would not say how many cases it suspects to be of the omicron variant.

The passengers from Friday’s flights were kept separated from other travellers and those who tested positive are now being kept in isolation at a hotel near the airport.

A spokesperson for KLM, the Dutch arm of Air France (AIRF.PA), said the passengers on the flight had either tested negative or shown proof of vaccination before getting on planes in Cape Town and Johannesburg.

“It goes too far to say we are surprised” by the high number of cases, a KLM spokesperson said. “But we don’t have an explanation.”

The spokesperson said it was possible many of the positive cases were among vaccinated people, or that an unusual number of people developed infections after having tested negative.

Dutch health authorities were seeking to contact some 5,000 other passengers who have travelled from South Africa, Botswana, Eswatini, Lesotho, Mozambique, Namibia or Zimbabwe since Monday to urge them to take a COVID-19 test as soon as possible.

Paula Zimmerman, a Dutch photographer who returned from a family visit in South Africa on Friday morning, said the situation for the passengers on the planes was chaotic, as they were kept waiting on the tarmac and in the terminal for hours. read more

Zimmerman was told she had tested negative at 4 a.m., almost 18 hours after landing in Amsterdam. But she then found out she was standing right next to a man who discovered he had tested positive.

“It was really weird. There was no coordination. There were too few people and there really wasn’t anybody who took control.”

Having spent hours on a flight that likely had many infected passengers made Zimmerman anxious for the days to come, she said.

“I’ve been told that they expect that a lot more people will test positive after five days. It’s a little scary, the idea that you’ve been in a plane with a lot of people who tested positive.”

Dutch citizens are still allowed to return home from southern Africa, while EU citizens are allowed entry in transit to their home countries.

Medical staff, airline crews and people with pressing needs are also still allowed to travel. KLM will continue flights to the region, but all travellers must now test negative before departure and then quarantine for at least five days upon arrival in the Netherlands.

The new variant has been detected just as many European countries are grappling with a surge in coronavirus cases.

The Dutch government on Friday announced the nighttime closure of bars, restaurants and most stores as it tries to curb a record-breaking wave of COVID-19 cases that is swamping its healthcare system. read more

Sorgente articolo:
Dutch: Some of the 61 COVID cases from South Africa flights are new variant – Reuters