A planning committee on Monday significantly delayed a massive housing project for ultra-Orthodox Jews on the grounds of the disused Atarot airport in East Jerusalem, whose initial advancement last month sparked significant backlash from the Biden administration.

At the conclusion of a highly anticipated hearing of the Jerusalem District Planning Committee, the panel ordered a survey be conducted to determine the environmental impact of the 9,000-home plan, a process that will likely take a year to conclude.

The session was supposed to see the authorization of the Atarot plan through the early planning stage known as “deposit,” which would leave it one additional approval away from breaking ground on the project.

Supporters of a two-state solution have called the planned construction a serious obstacle to peace, as it would seriously impede a contiguous Palestinian swathe of neighborhoods through East Jerusalem and connecting to the West Bank.

The plan was thought to have been shelved after senior Israeli officials told The Times of Israel that they had assured the White House the plan would not be advanced. But Washington never confirmed having received such an assurance. The project was briefly taken off the docket on the Interior Ministry website, but reappeared days later, allowing Monday’s meeting to move forward as originally planned.

During the hearing, a representative from the Environmental Protection Ministry testified that the quality of life of the future Israeli residents could be harmed by the planned neighborhood’s close proximity to the Atarot Industrial Zone. 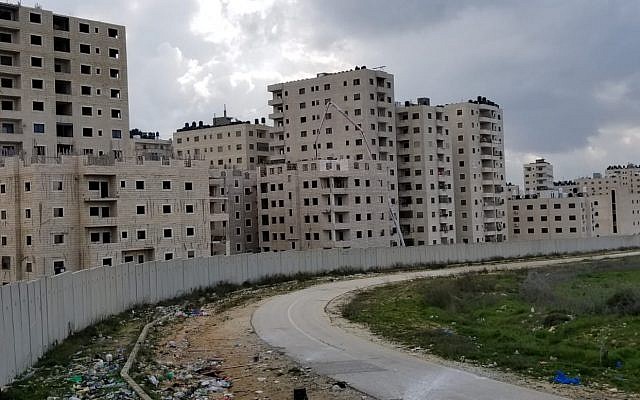 The security barrier that has cut Kafr Aqab off from the rest of Jerusalem on February 20, 2019. (Times of Israel)

Critics noted afterward that such environmental concerns are rarely taken into account by planning authorities when adjudicating construction for Palestinians. Some observers suggested that raising these concerns constituted an elegant way to delay the project without sparking internal coalition fighting among the ideologically divergent parties.

The representative recommended that additional evaluations be carried out before the plan is advanced further. Her office is run by Tamar Zandberg of the left-wing Meretz party, which opposes such construction in East Jerusalem.

The representative from the Health Ministry, which is run by Meretz chairman Nitzan Horowitz, also asked that an environmental survey be conducted, leading some to speculate whether the effort had been planned in advance by the left-wing ministers. However, representatives from ministries across the government participate in such District Planning Committee meetings, with their role being to judge building projects on the docket through various lenses to ensure that they’re properly prepared. They are also barred from receiving directives from political figures.

The committee members also voiced security concerns over the construction of a neighborhood less than 50 meters away from the West Bank security barrier. On the other side of the concrete wall lies the long-neglected East Jerusalem neighborhood of Kfar Aqab and Qalandiya refugee camp, which is in the West Bank.

In announcing its decision, the District Planning Committee said in a statement that while it had ordered the environmental review, the panel was “impressed” by the project’s use of unused land reserves.

The Israeli government has backed the neighborhood plan, with Interior Minister Ayelet Shaked and Housing Minister Ze’ev Elkin playing key roles in its initial advancement last month by a local planning committee in the Jerusalem municipality.

But Regional Cooperation Minister Issawi Frej from the left-wing Meretz party attended Monday’s hearing and spoke out against the project. He also used the opportunity to pitch his own idea for the Atarot space: rehabilitating the airport as a joint Israeli-Palestinian venture.

“We could build an airport that will serve the metropolitan Jerusalem area — including 3 million Palestinians who cannot head abroad, except via Jordan,” Frej said. 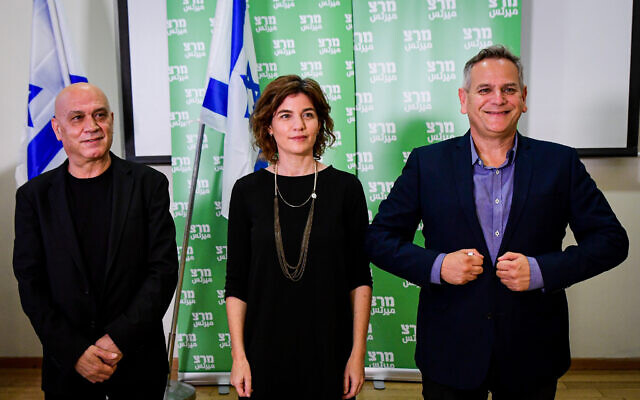 Meretz leader MK Nitzan Horowitz with MK Tamar Zandberg and Meretz party member Issawi Frej during a press conference of the Meretz party ahead of the upcoming elections, in Tel Aviv, January 4, 2021. Photo by Avshalom Sassoni/Flash90

Right-wing Jerusalem municipality official Yaakov Halperin shot back: “The minister’s words are not a real concern for the people of Israel and the Jews in Israel, it is clear that he opposes it for political reasons.”

“This neighborhood will be built,” Halperin said.

Also in attendance at Monday’s hearing was a representative from the US embassy, though she did not offer comment. According to a report on the Walla news site, US Ambassador to Israel Tom Nides was originally supposed to present his credentials to President Isaac Herzog in a ceremony scheduled to take place at the same time as the District Planning Committee hearing, but the event was moved to Sunday to avoid embarrassing the US side.

Commenting on the project during his Yesh Atid party’s faction meeting on Monday, Foreign Minister Yair Lapid said the government would formulate a policy for the Atarot area that won’t lead to a diplomatic crisis.

“We will make sure that it does not turn into a confrontation with the American administration,” he said, promising that the issue will be resolved internally within the coalition government.

During her Labor faction’s meeting, Transportation Minister Merav Michaeli voiced her support for Frej’s plan, saying she “hopes and believes that the option of building an airport at Atarot will be considered seriously.” 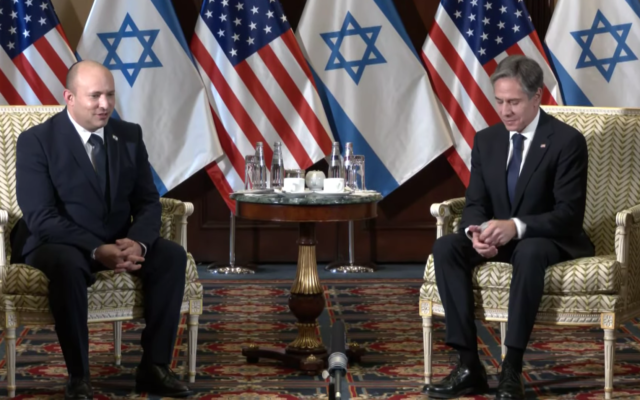 Prime Minister Naftali Bennett (L) meets with US Secretary of State Antony Blinken at the Willard Hotel in Washington on August 25, 2021. (Screen capture/YouTube)

All Jewish Israeli construction in mostly Arab East Jerusalem, which Israel conquered in 1967 from Jordan, raises hackles. Palestinians see the area as the capital of their future state. Israel views all of municipal Jerusalem as its undivided capital and formally annexed East Jerusalem in 1980.

Much of the international community rejects Israel’s annexation of the contested Palestinian neighborhoods. They consider Israeli neighborhoods over the 1967 Green Line to be settlements. And even stalwart Israeli allies, such as the United States, have warned that unabated Jewish construction in East Jerusalem could prevent the establishment of a Palestinian capital there in a future two-state solution.

US Secretary of State Antony Blinken initiated a phone call with Prime Minister Naftali Bennett last Thursday to express his dismay over the planned approval of the Atarot project, sources familiar with the matter told The Times of Israel.

The phone call was “intense,” an official said, with Blinken expressing the Biden administration’s vehement opposition to the project.

A source familiar with the details of the call said Bennett assured Blinken that the plan would not receive final approval for construction, but Blinken — who received a detailed briefing on the matter ahead of the call — resisted and said that any advancement of the plan at all would be unacceptable, as far as Washington is concerned.

Jerusalem appeared determined to advance the plan through the deposit stage so that it will only require one additional approval from the District Planning Committee in order to begin breaking ground, the well-placed source suggested.

While the committee responsible for advancing the plan is under the auspices of Shaked’s Interior Ministry, the project itself is being marketed by the Housing Ministry headed by Elkin, who has made clear in recent months that he plans to use his post to advance Israeli construction beyond the Green Line.

One coalition lawmaker told The Times of Israel that given the lack of agreement among members of the diverse coalition — which includes, right-wing, centrist, left-wing, and Arab parties — on the issue of Israeli construction in East Jerusalem and the West Bank, each minister is working to advance their own party’s agenda from their own respective office, leaving Bennett with the difficult task of maintaining order.