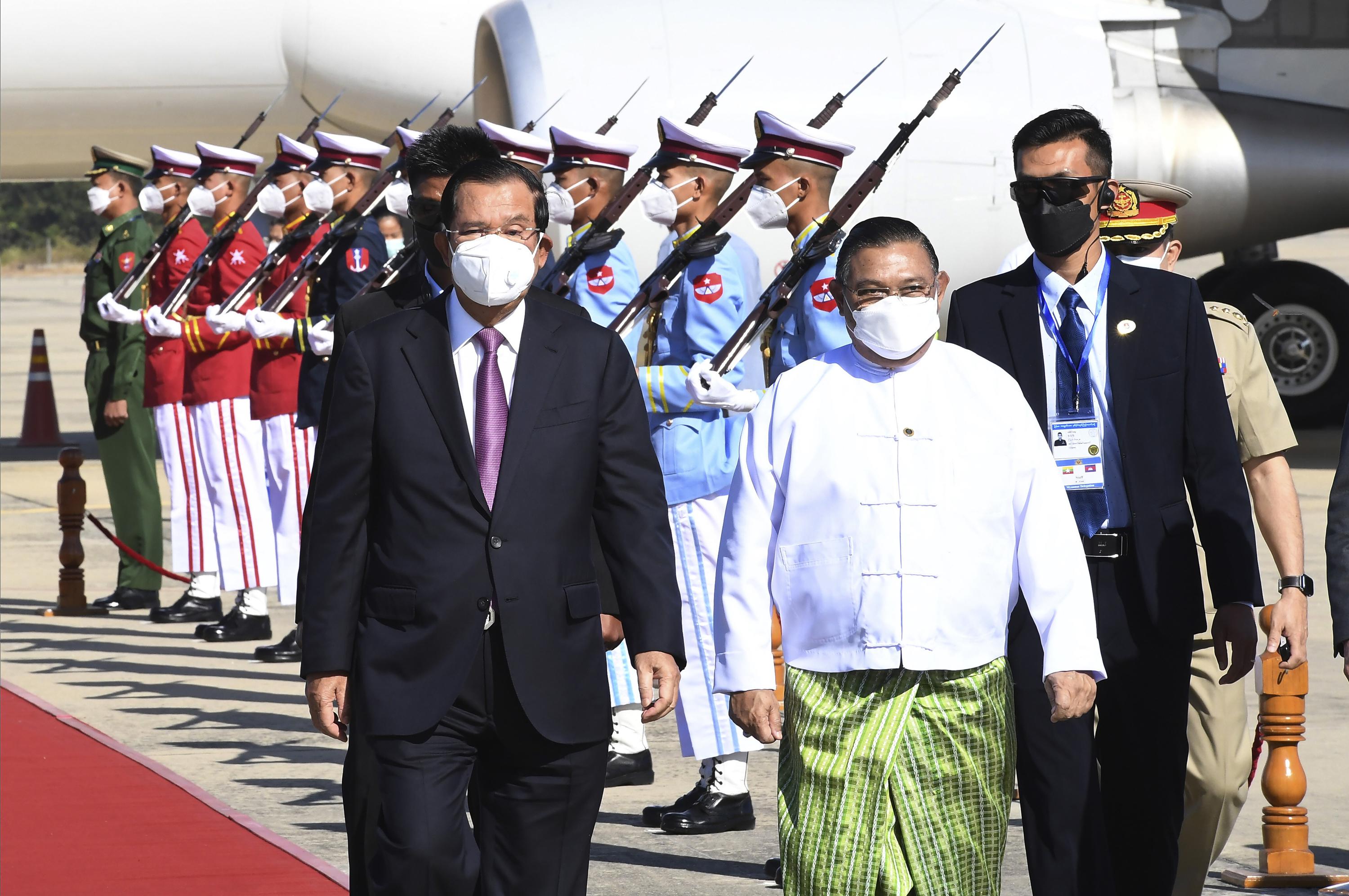 BANGKOK (AP) — Cambodian Prime Minister Hun Sen is visiting Myanmar on what he says is a trip meant to restore peace after a Feb. 1 military takeover but that critics say will just legitimize the army’s seizure of power.

Hun Sen is himself an authoritarian leader who has held power for 36 years and keeps a tight leash on political activity in Cambodia. He is the first head of state to visit Myanmar since the coup that ousted the elected government of Aung San Suu Kyi.

Hun Sen said on Wednesday in Phnom Penh that he had not set any pre-conditions before his visit.

“What I would like to bring to the talks is nothing besides the five points, consensus points that were agreed upon by all ASEAN member states,” he said late Wednesday.

The proposal calls for a halt to the violence that has followed the military takeover, talks with the opposition on a peaceful resolution and permission for a special ASEAN envoy to meet and mediate with all parties in the conflict.

ASEAN leaders including Min Aung Hlaing agreed on those points last April. The Myanmar leader was barred in October from attending ASEAN meetings after the then-ASEAN special envoy was prevented from meeting with Suu Kyi and other political detainees.

Myanmar’s military has said Hun Sen also would not be allowed to meet with Suu Kyi, who was convicted in December on charges of incitement and violating coronavirus restrictions and sentenced to four years in prison — a sentence that Min Aung Hlaing then cut in half.

The army’s takeover prevented Suu Kyi’s National League for Democracy party from beginning a second term in office. It won a landslide victory in national elections in November 2020 and independent election observers did not find any major irregularities.

Min Aung Hlaing’s move undid 10 years of progress toward democracy after the army loosened its grip on power after decades of repressive military rule.

The Myanmar military has a history of bloodshed, including a brutal campaign against the Rohingya Muslim minority. Its seizure of power provoked nationwide nonviolent demonstrations, which security forces have quashed with deadly force. The military has recently engaged in violent suppression of all dissent, disappearances, torture and extra-judicial killings. It has also launched air strikes and ground offensives against ethnic armed rebel groups.

Security forces have killed about 1,443 civilians, according to a detailed tally by the Assistance Association for Political Prisoners. As the crackdown has become more severe, an armed resistance has grown inside the country.

Hun Sen, who has retained power by exiling or imprisoning the Cambodian opposition, may be hoping his visit will burnish his own tarnished international image.

“Meeting Min Aung Hlaing, shaking blood-stained hands. It’s not going to be acceptable,” said Dr. Sasa, a spokesman for the group who uses one name.

Indonesian President Joko Widodo said Myanmar’s leader will continue to be excluded from ASEAN meetings unless some progress is made.

“Should there be no significant progress on the implementation of the five-point consensus, Myanmar should only be represented at a non-political level at ASEAN meetings,” Widodo tweeted after speaking to Hun Sen.