Just weeks ago, South Africa was the focus of the world’s anxieties over Omicron as infections rocketed in one of the first countries to detect the highly contagious coronavirus variant.

But with the new variant now prevalent worldwide, South Africa is providing clues to life after Omicron. President Cyril Ramaphosa’s government has said the country’s fourth Covid-19 wave has peaked. Total excess deaths attributed to Omicron are about 10,000, compared with about 110,000 excess deaths during the previous, Delta-driven wave.

Even though three-quarters of all South Africans are still not double jabbed against Covid-19, vaccinations, immunity after previous infections and signs that Omicron is a milder disease appear to have kept the pressure off hospitals.

“The most important issue is that there was a clear decoupling between community spread, which has been very rapid, and the level of hospital admissions,” said Richard Friedland, chief executive of Netcare, South Africa’s biggest provider of private healthcare. “We have not suspended elective surgeries, and there is no pressure on beds . . . We have had no capacity constraints at all in the fourth wave.”

In Gauteng, South Africa’s economic hub and the initial centre of the Omicron outbreak, excess deaths have also peaked, far below previous waves, just weeks after the surge.

“The incredible speed of this wave is still what I’m surprised at,” said François Venter, an expert on HIV and infectious diseases at Johannesburg’s Wits University. “This is the one wave where everyone I knew has been infected.”

This is all the more striking because South Africa has high levels of immunity compared with other countries. One recent study estimated there were antibodies in about three-quarters of blood samples taken in Gauteng as Omicron struck.

Excess natural deaths last year, for example, were more than 200,000, mostly ascribed to coronavirus and far beyond South Africa’s official pandemic death toll of just over 90,000 people. The country’s total population is 60m.

“That is pretty sobering,” said Tom Moultrie, professor of demography at the University of Cape Town, who tallies the excess death figures with a team of scientists. “We have possibly had a low-mortality situation in South Africa with Omicron by virtue of the burden we have suffered.”

Peak hospital admissions in South Africa’s Omicron wave were about two-thirds of the Delta peak. But this figure hides an important nuance that underlines the mild or moderate nature of many cases compared with past waves, Friedland said.

“A new category of patients emerged, which we had not seen in the past three waves — something we have classified as incidental Covid,” he said. During the Delta wave, nearly all of the positive patients in Netcare hospitals had acute respiratory problems. This time it was about a third. 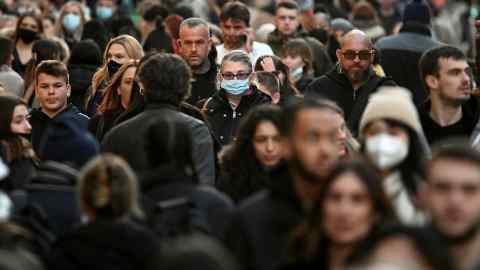 Whereas maternal Covid-19 cases were often very serious in previous waves because of the possible complications, “one day in December in one of our hospitals, out of 14 births that day, 13 patients tested positive, and all were asymptomatic”, Friedland said.

The typical time patients stayed in hospital remained at about three days under Omicron, compared with about seven days in the other waves, he added.

It was “very heartening” that South African public and private hospitals were able to deal with Omicron-related admissions without being overwhelmed, Venter said. It also showed the value of early warnings so that doctors could prepare, he added.

South African scientists not only discovered the Omicron variant early but also studied indicators such as the prevalence of virus fragments in waste water samples to determine its rapid initial spread.

While rates of severe and deadly cases with Omicron were far lower than during the Delta wave, South Africa’s pandemic monitoring now needs to understand who was most affected by the variant. “That will inform who we need to vaccinate urgently next time,” Venter said. “We need to know who we need to put at the front of the queue.”

Ramaphosa’s government is still behind on its target of 70 per cent of the adult population for first vaccinations. Rollout has been dogged by the unequal distribution of jabs and the cost of getting to vaccination sites.

“You can’t just simply offer vaccines and say it is the public’s fault for not coming forward. You have to make it easy to access,” Venter said.

As South Africa emerges from this wave, Moultrie cautions on “over-extrapolating our experience to other countries”.

Omicron’s contagious nature may have different implications for pressure on hospitals in countries with older populations and without South Africa’s high rate of past infections.

“It might not be the utter carnage of previous waves, but it can still place health systems under strain,” Moultrie said.

South Africa is also showing that Omicron waves may not fade as rapidly as they emerge. The proportion of tests that come back positive is now far below peaks of 40 per cent in some areas. But in Gauteng, positive test rates have only just fallen below 20 per cent.

“I think that it is premature either to say it is the end of the world or a ‘nothingburger’,” Moultrie said. “The uncomfortable truth is somewhere between that. It is a lesson in sobriety.”