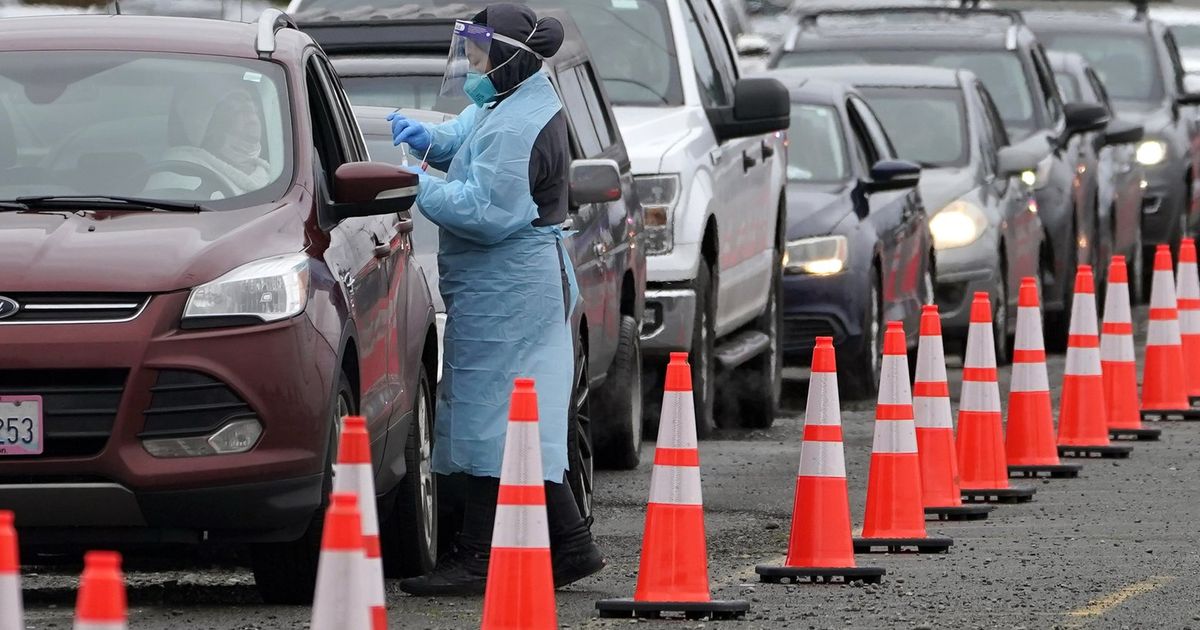 A wave of COVID-19 hospitalizations is pushing health care systems in Washington state “closer than they’ve ever been” to a crisis point, hospital leaders, doctors and public health officials said Thursday.

The effects of the omicron variant’s rapid surge across the state were coming into focus this week as the hospital leaders and health officials detailed trends of severe COVID-19 cases, which had been in decline since the peak of the delta variant last summer.

So far, King County and Western Washington have faced the brunt of the omicron spike, but the rest of the state isn’t far behind, state health officials said in a Thursday news briefing.

The state reported yet another record number of infections Thursday with 15,157 in one day, topping the 11,000-plus high set the day before.

There are early signs that these new infections are causing less severe illness, especially in vaccinated people. Fewer cases of pneumonialike sicknesses are popping up, for example, meaning omicron “doesn’t seem to have as great a predilection for the lower respiratory tract,” Dr. Francis Riedo, medical director for infection control and prevention at EvergreenHealth in Kirkland, said during a separate briefing with hospital leaders.

But at UW Medicine’s four campuses — three in Seattle and one in Renton — COVID-19 hospitalizations are higher than they’ve been at any other point in the pandemic, reported Dr. John Lynch, medical director of Harborview Medical Center’s infection-control program.

“This is a numbers game,” Riedo said. “A small percentage of a million people is a huge number, still.”

As of Thursday, King County was averaging about 31 COVID-19 hospitalizations per day, a 76% increase in the past week. Infections also still have yet to peak, averaging about 2,700 new cases per day. And while deaths have been on the decline in the county for weeks, signs of another rise are beginning to emerge. In the past 24 hours, King County confirmed eight new COVID deaths, according to data from Public Health — Seattle & King County.

“Throughout (the pandemic) we’ve been able to respond to pretty much every twist and turn, but right now we’re closer to a crisis situation than we’ve ever been,” Lynch said.

He urged Washingtonians throughout the state not to come to hospital emergency rooms for COVID tests or mild COVID treatment, as health care systems are quickly approaching a point where they can’t handle many more patients. Factors further challenging hospitals and their staff include increasing worker infection rates — forcing them out of work and into isolation or quarantine — delayed care, obstacles discharging patients who no longer need hospital care, and limited testing access statewide.

“We are entering, I think, the most challenging phase of this pandemic, period,” Lynch said.

Gov. Jay Inslee has set a press conference today at 2:30 p.m. to discuss the state’s ongoing response to the COVID-19 pandemic.

Much of the state is seeing the same shifts in COVID-19 numbers.

Over the past week, Washington state has recorded 1,387 patients hospitalized with COVID-19, with about 126 on ventilators, said Washington State Hospital Association CEO Cassie Sauer on Thursday. About another 100 patients likely have COVID, but they have yet to be confirmed, she added.

A month ago, state hospitals were caring for an average of about 664 COVID-19 patients per week.

“We’re fortunately still below the delta peak, but the rate of acceleration is very, very alarming,” Sauer said.

Deaths haven’t yet increased on a state level, but deaths can sometimes follow case counts by more than a month, Dr. Tao Kwan-Gett, the state’s chief science officer, noted in a Department of Health (DOH) briefing Thursday.

Fortunately, Sauer said, the majority of COVID-19 patients are less sick than they were during previous waves, with a smaller proportion of people requiring ICU treatment. Some patients come to the emergency department and can be treated and sent home within a few days, she said.

“But we’re at the beginning of the wave, so we don’t know what’s going to happen,” Sauer said.

Hospital leaders also reminded the public that the state’s health care systems “don’t have room to care for even a small number of [additional] COVID patients.”

In addition, while Western Washington hospitals are generally assuming nearly everyone recently infected has omicron — which virologists predicted — they don’t definitively know which variant is affecting each patient.

Because of that uncertainty and the ongoing presence of delta, specialized treatment is sometimes “confusing,” Sauer said.

Unvaccinated people continue to suffer the worst symptoms, with a chance of dying 15 times higher than those who are vaccinated, state health leaders said Thursday. Important to note, Lynch said, is that vaccinated Washingtonians are still becoming infected, although at a “much lower proportion.” Those who have received booster shots are the most protected from both infection and hospitalization, he added.

MultiCare Health System, based in Tacoma with locations throughout the state, has seen a 250% increase in COVID hospitalizations in the past three weeks, hospital spokesperson Holly Harvey said earlier this week. As of Tuesday, the health care system was caring for 254 COVID patients in the Puget Sound region — higher than ever before, she said.

“This does feel different,” Montanye said, speaking about what she’s seen in the southwestern corner of the state.

“It’s not just a day or two when we’re not able to get a patient discharged appropriately,” she said. “We have had a patient here over 100 days. We’ve had five patients here over 50 days. About 20 patients have been here about 20 or more days. … We just don’t have a lot of give for what might be coming.”

A large part of the strain on hospital capacity is because of difficulties discharging patients who no longer need acute care, creating an overwhelming backlog of patients that’s prompting hospital and medical leaders to push for state and legislative action.

“As physicians, we know when we can do no more for our patients, and that time is now,” the presidents of the Washington State Medical Association and the Washington chapter of the American College of Emergency Physicians wrote in a letter.

The letter urged state leaders to take several steps specifically aimed at resolving issues around discharging patients from hospitals to long-term care facilities, which in the past several months has been one of the major barriers in freeing up hospital beds.

“We are desperate for help on our ability to discharge (patients),” Sauer said in the Thursday briefing, drawing attention to similar requests, like increasing incentives to long-term care providers for taking discharged patients, addressing barriers to guardianship for patients unable to consent; and using the national guard to assist with staffing shortages.

In Washington state, a spouse or a child of a patient who can’t consent to being discharged is not legally allowed to consent on behalf of them without a power of attorney, Sauer said. They would have to go through a guardianship appointment process, which is “extensive and laborious,” further slowing hospitals’ ability to free up space, she said.

“This is ludicrous,” Sauer said. “It needs to be changed.”

She added that hospitals are hoping Inslee might consider using emergency powers to speed things along over the next few weeks.

Shah said during the DOH news conference that he was not yet aware of the letter, but that an “incredible amount of resources” already have been opened up. Still, he acknowledged “there may be some practitioners who feel that more should be done.”

In remarks Thursday, Inslee said he has spoken with Washington National Guard Maj. Gen. Bret Daugherty about finding personnel who could assist at the hospitals.

“We are preparing for the use of National Guard that can be useful in the health care system,” Inslee said.

He added, however, that the Guard “cannot solve the problem single-handedly of a lack of nurses or physicians.”

While the state has not yet reached a level of “crisis standards of care” — when health care systems prioritize patients for resources and deny treatment to one patient in order to give it to another — hospitals are close. How close?

“Closer than we’ve ever been,” Lynch said.