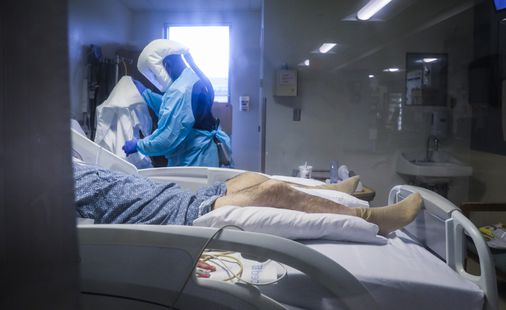 Six months later, America is averaging nearly 650,000 cases a day. Officially, there have been 7.4 million cases of COVID-19 since Christmas, meaning one positive test per every 50 Americans.

The virus did not cooperate with the president’s Independence Day vision. It mutated. A lot.

“Frankly, I’m still sort of in shock at what is happening at this stage of the pandemic,” admitted Akiko Iwasaki, a virologist at Yale University studying the mechanisms of immune defense against viruses.

But even within this current viral blizzard, there are glimmers of hope. Signs that Omicron is less virulent than Delta. That the variant’s dozens of mutations may blunt the effectiveness of the vaccine, but do not obliterate the protection the shots offer. That treatments developed these past two years can mitigate some of the most dire cases. That there will one day come a time when we are not at the mercy of the virus, our plans derailed, texts filled with dread, emergency rooms full, and eyes glued to little pink lines on rapid tests.

“I don’t think there will be a certain day we declare victory,” said Dr. Marc Lipsitch, director of the Center for Communicable Disease Dynamics at the Harvard T.H. Chan School of Public Health. “But we could be moving toward a world in which the virus is endemic but it’s less harmful to us — not because the virus has changed, but because we have.”

To become endemic means that COVID-19 may never disappear — gone the hopes of a zero COVID future — but it may be defanged by layers of immunity, gained through natural infection and a regular vaccine regimen, as well as a menu of antiviral treatments that lessen the severity of symptoms. The virus will no doubt still pose potentially grave threats to the elderly and medically vulnerable, but the scale of suffering could be much lower, closer to what we endured in the worst flu seasons before COVID’s arrival.

To be clear: We are nowhere near that point. The worst week of a particularly virulent flu season might see some 35,000 hospitalizations and 3,000 deaths in the United States. Right now, COVID-19 is responsible for roughly 850,000 hospitalizations and 10,400 deaths a week. And those stark figures are being tallied in a country with widely available vaccines and several treatments for those infected. As we enter the third calendar year of the pandemic, much of the world still has little access to vaccines at all.

Given the yawning discrepancies, many experts are understandably reluctant to speculate about how the pandemic may end. The idea of learning to live with a virus that continues to strain hospitals and kill thousands of people a day is a grim mental exercise.

“Tied directly to the question of how we can get ourselves to endemic status is the question of how many people are we willing to let die or be permanently disabled in order to get to that point,” said Megan Ranney, an emergency physician at Rhode Island Hospital who has served on the front lines of the pandemic for two years now.

In a letter sent to the student body in December, Northeastern University chancellor Ken Henderson declared: “As we move into this endemic phase of the pandemic, our job is to continue to control COVID effectively, not let COVID control us.”

Far larger institutions and government agencies have quietly begun to grapple with the question of how the country learns to live with COVID-19. The Centers for Disease Control and Prevention’s controversial move to slash the recommended time in isolation for people who catch COVID, from 10 days to five, was rooted in a determination to keep society running even amid record-high case counts.

Shorter quarantines could well hasten the already lightning spread of Omicron. It is likely the costs — death, the possibility of widespread long COVID, and nearly crippled hospitals — will be significant. But the astonishing tempo and reach of the Omicron variant could signal a turning point in the pandemic, some experts say.

“It is possible that Omicron is the last big variant and we will see variations, but they will mostly be sons of Omicron and not pose too big a threat to immunity. This is a highly transmissible variant so it’s going to be hard to displace it,” said William Moss, an epidemiologist at Johns Hopkins Bloomberg School of Public Health. “In this case, Omicron would indeed be the last big wave and we settle into an endemic pattern where COVID is with us, but not posing an existential threat. If I were a betting man, that would be my bet.”

He then added: “But I am not a betting man with this virus.”

Still, such projections are bolstered by recent bright spots in the data. South Africa’s December Omicron wave peaked quickly, and case numbers have been plummeting since Dec. 18. In the wake of the South African spike, researchers have found evidence that people who have recovered from Omicron appear to be resistant to the Delta variant, according to a small study published by South African scientists in late December.

But it is wishful thinking to think that the wildfire spread of Omicron will usher in the final transition from pandemic to endemic without a continuing vaccination push and surveillance efforts to trace the virus’s trail.

“We absolutely cannot just throw up our hands and say, you know, we’re done with this virus,” said Ranney. “Because you’d think we’d know this by now, but the virus does not magically disappear.”

In a series of op-eds published in the Journal of the American Medical Association on Thursday, six of the public health experts who made up Biden’s now defunct COVID-19 advisory board emphasized the need to put infrastructure in place that prevents the country from being stuck in “a perpetual state of emergency.”

The essays dripped with measured criticism of the administration’s handling of the current surge. Among their sprawling list of pleas: vaccine mandates, investment in next-generation vaccines that match circulating SARS-CoV-2 variants, affordable and accessible testing and therapeutic interventions, and a comprehensive surveillance system for emerging variants.

The last two years of shutdown and sacrifice have given researchers the chance not only to develop vaccines but also crucial medical treatments that could also dramatically improve our ability to live with COVID. When they become broadly available, oral antiviral drugs like the Pfizer pill Paxlovid could be game changers in treating infections in vulnerable people, much like Tamiflu treats influenza.

“With these new oral therapies, absolutely I can imagine a place where the virus is around but as no more than a nuisance,” said Asish Jha, dean of the Brown University School of Public Health.

But the scale of their success hinges on the availability of widespread testing: We have to know who is infected to know whom to treat. The new regimens dramatically reduce the risk of COVID-19, but infected high-risk patients must be able to get tested, and then treated, quickly enough for the pills to make a difference. Paxlovid’s promising results assume the drugs can be administered in a narrow window — as early as 72 hours after symptoms emerge. US testing capacity continues to be plagued by a host of problems, including supply-chain bottlenecks and staffing shortages, that have left many Americans waiting several hours to days for results.

Even so, the supply does currently exist to use these treatments widely. The New York Times reported that New York City in one week burned through all 1,300 treatment courses of Paxlovid that it received in late December. On Tuesday, the US government doubled its order, but the drug won’t be plentiful until April at the earliest.

“None of these [treatments] are useful today so unfortunately we’re dealing with this surge without them. It is brutal,” said Howard Koh, former assistant secretary of the US Department of Health and Human Services.

“And it is going to be brutal for the next several weeks.”

As our ability to stave off the worst of COVID-19 improves, the virus will never truly go away. That leaves open the possibility that it will once again mutate into a “variant of concern.” While Omicron’s 50 mutations have seemingly made the strain less virulent, they also make clear just how adaptable this virus is — and the humility required in any discussions about what the future may hold.

“The big wild card for me is the emergence of a new variant and its ability to escape immunity,” said Moss, of Johns Hopkins. ”There is the extreme scenario where a potential variant has complete immune escape and basically acts like a new virus. Had Omicron not come about with so many mutations then this wouldn’t be as big of a wild card, but it did.”

Early detection of extreme mutations will enable scientists to test and tweak current vaccines and treatments so that they remain effective against new variants. (Think about hemming a mother’s wedding dress for a daughter rather than sewing a whole new one.) If a health system or laboratory is too slow to detect and report a concerning variant, the chance to contain its spread and, in potentially dire cases, adapt to its mutations will come too late.

Omicron’s swift ascent and the sprawling testing lines it has caused have provided a glimpse at how quickly COVID-19 could rage back if a new variant capable of evading natural and vaccine immunity arose.

“I would be remiss to say that I was confident because this virus again and again has fooled us,” said Ranney. “We’ve declared victory more than once before and we’ve been wrong.”

Sorgente articolo:
COVID may become endemic — meaning the virus and its mutations may never disappear – The Boston Globe