The Israel Defense Forces said Friday that drones captured after being flown across the frontier from neighboring Lebanon have provided insight into the growing aerial surveillance capabilities of the Iran-backed Hezbollah terror group.

Lebanon and Israel are technically in a state of war and drones have become a regular feature of their heavily guarded border.

Images extracted from one drone downed in August showed what the IDF said were Hezbollah drone operators and pictures of other drones, as well as an aerial shot of a northern Israeli community and military post.

An Israeli security source, speaking on condition of anonymity, said he believed the footage showed Hezbollah special forces training in how to use drones, which he said was the first such glimpse for Israel.

Israel is a leader in developing and using drones in warfare, but it is seeing its technological superiority challenged by arch-foe Iran, which is also developing unmanned aerial vehicles for military use.

The drones used by Hezbollah were not necessarily Iranian made, but rather ordinary commercially available devices, the second source said.

“It is so easy to just take a drone from the store and gather intelligence and do whatever you imagine,” he said. 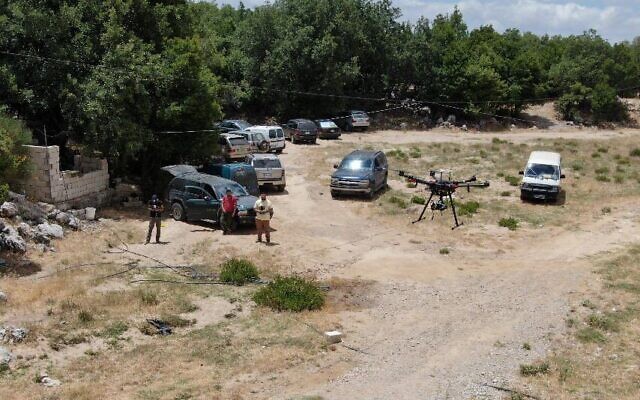 Maj. Avichai Adraee, the IDF’s Arabic-language spokesman, said the military’s Galilee Division has recently begun using a special system against Hezbollah drones along the border, leading to a marked increase in the number downed by Israeli forces. He did not give further details about the system.

According to the Walla news site, at least 74 drones flown by Hezbollah crossed into Israeli territory last year, compared to 94 in 2020 and 54 the year before that. Most of the drones were downed.

In September, Hezbollah said it had shot down an Israeli drone over Lebanon.

Hezbollah operates out of Lebanon, which is struggling in the midst of a dire economic crisis. The first security source said the economic woes did not appear to have lessened Hezbollah’s drone program.