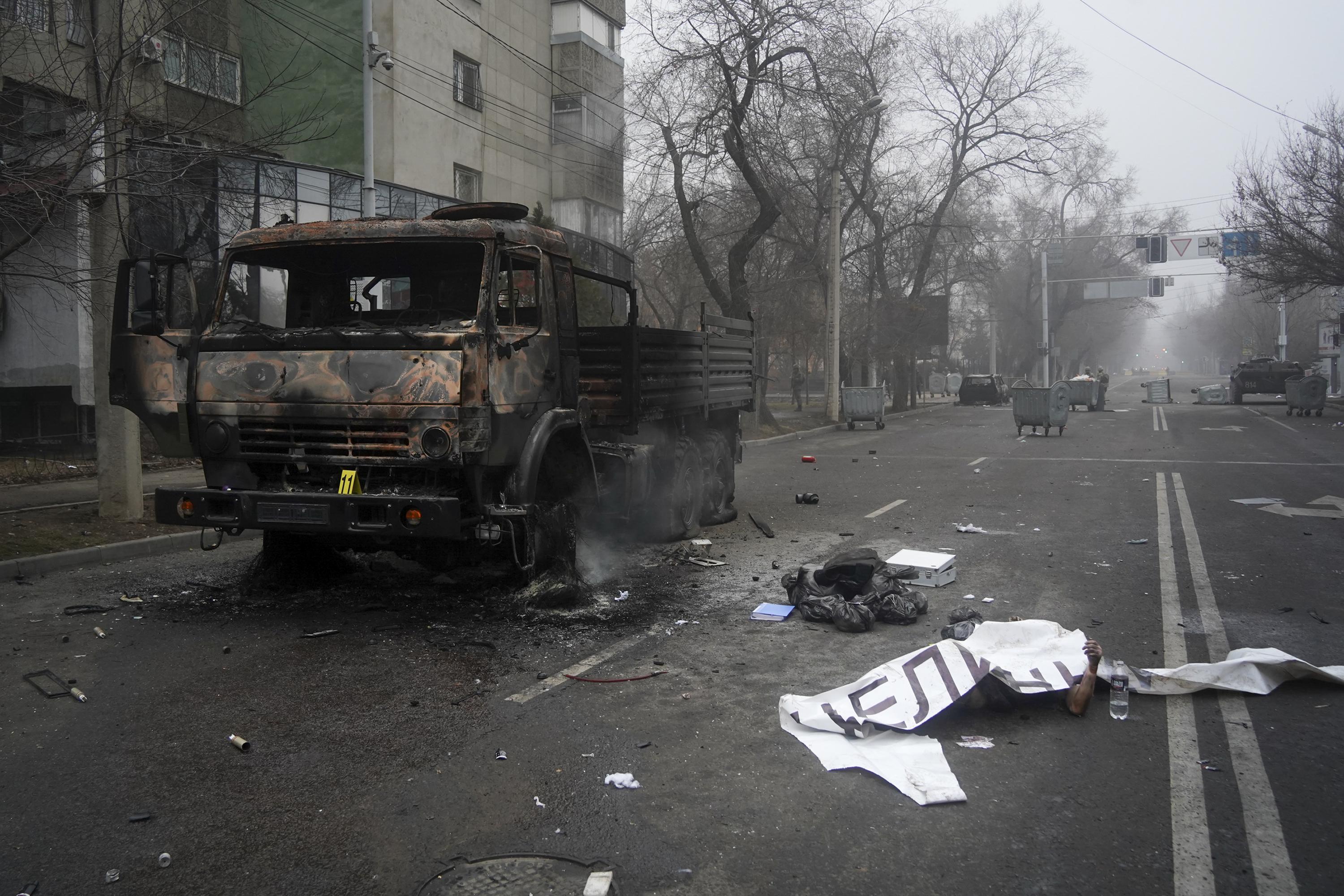 MOSCOW (AP) — The office of Kazakhstan’s president said Sunday that about 5,800 people were detained by police during protests that developed into violence last week and prompted a Russia-led military alliance to send troops to the country.

President Kassym-Jomart Tokayev’s office said Sunday that order has stabilized in the country and that authorities have regained control of administrative buildings that were occupied by protesters, some of which were set on fire.

The Russian TV station Mir-24 said sporadic gunfire was heard in Almaty, the country’s largest city, on Sunday but it was unclear whether they were warning shots by law enforcement. Tokayev on Friday said he had authorized police and the military to shoot to kill to restore order.

Almaty’s airport, which had been taken by protesters last week, remained closed but was expected to resume operating on Monday.

Protests over a sharp rise in prices of LPG fuel began in the country’s west on Jan. 2 and spread throughout the country, apparently reflecting discontent extending beyond the fuel prices.

The same party has ruled Kazakhstan since independence from the Soviet Union in 1991. Any figures aspiring to oppose the government have either been repressed, sidelined, or co-opted and financial hardship is widespread despite Kazakhstan’s enormous reserves of oil, natural gas, uranium and minerals.

Tokayev contends the demonstrations were ignited by “terrorists” with foreign backing, although the protests have shown no obvious leaders or organization. The statement from his office on Sunday said the detentions included “a sizable number of foreign nationals,” but gave no details.

It was unclear how many of those detained remained in custody on Sunday.

The former head of Kazakhstan’s counterintelligence and anti-terror agency has been arrested on charges of attempted government overthrow. The arrest of Karim Masimov, which was announced Saturday, came just days after he was removed as head of the National Security Committee by Tokayev.

No details were given about what Masimov was alleged to have done that would constitute an attempted government overthrow. The National Security Committee, a successor to the Soviet-era KGB, is responsible for counterintelligence, the border guards service and anti-terror activities.

Some of the force is guarding government facilities in the capital, Nur-Sultan, which “made it possible to release part of the forces of Kazakhstani law enforcement agencies and redeploy them to Almaty to participate in the counter-terrorist operation,” according to a statement from Tokayev’s office.

In a sign that the demonstrations were more deeply rooted than just the fuel price rise, many demonstrators shouted “Old man out,” a reference to Nursultan Nazarbayev, who was president from Kazakhstan’s independence until he resigned in 2019 and anointed Tokayev as his successor.

Nazarbayev retained substantial power as head of the National Security Council. But Tokayev replaced him as council head amid this week’s unrest. possibly aiming at a concession to mollify protesters. However, Nazarbayev’s adviser Aido Ukibay said Sunday that it was done at Nazarbayev’s initiative, according to the Kazakh news agency KazTag.