A quarter of million people in Israel have received a fourth dose of the coronavirus vaccine, the Health Ministry said Sunday morning.

According to data released in a daily report distributed by the ministry, around 254,000 people in Israel have been vaccinated four times since Israel began its rollout of a fourth dose — a second booster — last week.

All Israelis aged 60 and over, medical workers and those who are immunosuppressed are eligible for the fourth shots.

The fourth booster program is a key element of Israel’s strategy in the face of the surging Omicron variant, and Prime Minister Naftali Bennett on Sunday praised the “exceptional response” to the rollout.

“Almost 250,000 people have already been inoculated [for a fourth time],” the premier said at the start of the weekly cabinet meeting. “This is an exceptional response that will prevent much severe morbidity and suffering.”

Bennett also said that 1.5 million rapid antigen tests were being delivered to retirement homes in the hope of adding another layer of protection for those most vulnerable to COVID-19.

With case numbers continuing to rise, Israel is pinning its hopes on its vaccination campaign, including giving a fourth shot to its most at-risk populations, despite a paucity of data on the extra dose. 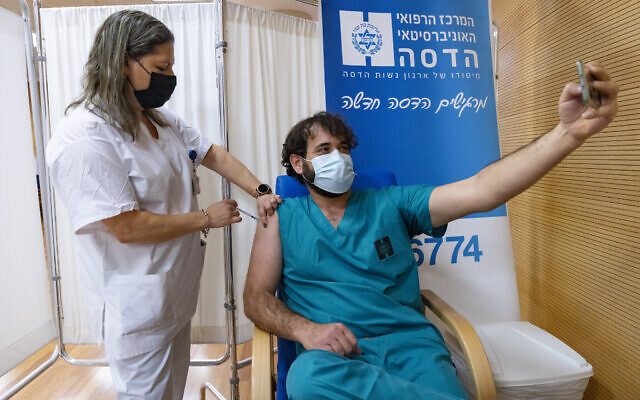 Medical staff receive a 4th dose of the COVID-19 vaccine at the Hadassah Medical Center in Jerusalem, January 06, 2022 (Olivier Fitoussi/Flash90)

Bennett said last week that he had been presented with interim results from a small Israeli study that a week after receiving the fourth dose, recipients had almost five times more COVID-19 antibodies in their blood. However it remained unknown if the antibody protection was maintained after that period and the full results of the study have yet to be released.

Meanwhile, case tallies continued to mount as the number of COVID-19 patients listed as seriously ill rose to 206, according to Health Ministry figures released Sunday.

Sunday’s tally of serious cases of COVID-19 was nearly double the 112 patients in serious condition recorded a week earlier. The number of hospitalizations rose from 338 a week ago to 524. 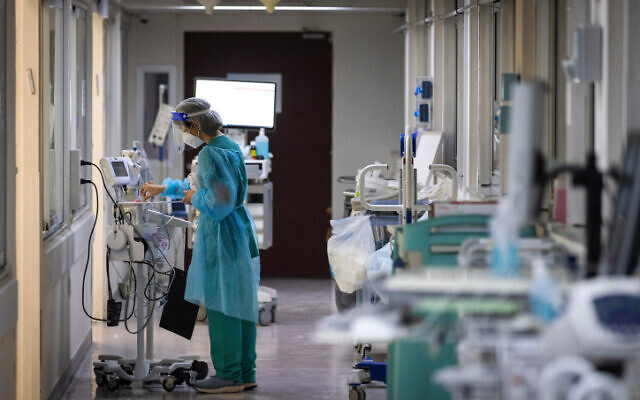 While the daily tally of 17,521 new cases Saturday was a slight dip from Friday’s record-setting 18,831 new cases, the test positivity rate climbed to levels not seen in over a year. Case numbers generally dip over the weekend due to vagaries in testing.

The positivity rate of 11.71 percent was the highest recorded since October 2020, though it came as Israel began accepting less-accurate rapid antigen tests, while saving the more accurate PCR tests for over-60s and the unvaccinated, to reduce crowding at testing stations.

The death toll remained at 8,259, with no change since Friday.