More than 150,000 people have died after catching coronavirus in the United Kingdom, the government said Saturday, in a tragic milestone for one of the worst affected countries in Europe.

British Prime Minister Boris Johnson posted a message on Twitter saying: “Coronavirus has taken a terrible toll on our country and today the number of deaths recorded has reached 150,000.”

The government reported that deaths within 28 days of a positive COVID-19 test had reached 150,057 since the start of the pandemic.

Russia is the only European country with a higher reported death toll, at almost 315,000.

In a tweet on a black background, Johnson said that “each and every one of those” who died “is a profound loss to the families, friends and communities affected and my thoughts and condolences are with them.”

The number of daily reported cases in the UK surged to a record figure of more than 200,000 last week, but has subsided slightly in recent days with 146,390 cases reported in the last 24 hours.

The country has introduced new rules including compulsory wearing of face masks by school children during lessons, while Johnson resisted cracking down on social gatherings in England over the festive period. 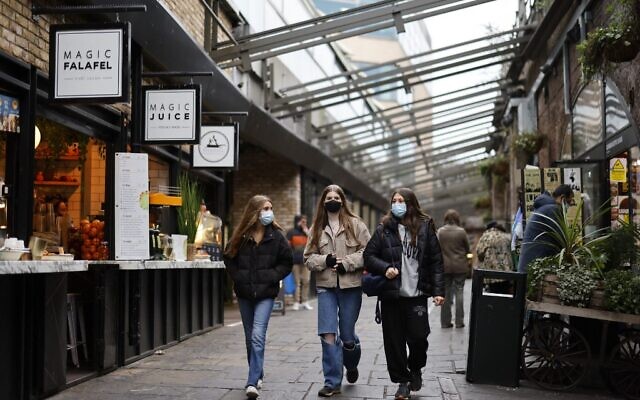 Shoppers wearing face coverings to combat the spread of the coronavirus, walk past stores in Camden Market in London, on January 7, 2022. (Tolga Akmen/AFP)

The massive number of people testing positive or in self-isolation has hit staff numbers in all sectors including the state-funded health service, prompting the defense ministry to announce Friday that it will send troops in to assist staff in hospitals.

Hospitalizations and deaths are nevertheless far lower than in the first wave of the pandemic when people were unvaccinated.

The government is urging the public to get boosters, which have already been administered to around 61 percent of the population aged over 12. It is also seeking to persuade the unvaccinated to receive jabs.

“Our way out of this pandemic is for everyone to get their booster or their first or second dose if they haven’t yet,” Johnson said Saturday.

In France more than 100,000 people protested Saturday over what they say are government plans to further restrict the rights of the unvaccinated, days after French President Emmanuel Macron vowed to “piss off” those refusing the shot. 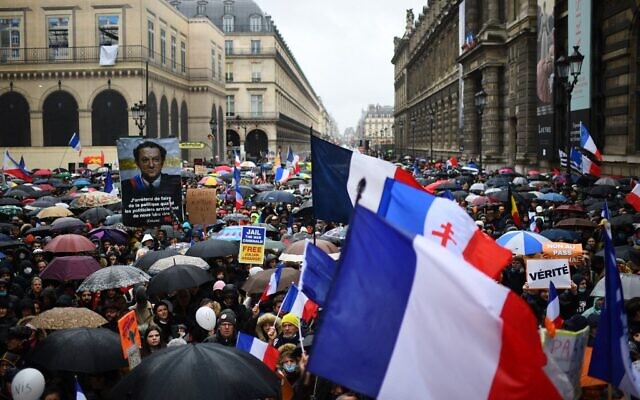 Demonstrators gather during a protest against the health pass and COVID-19 vaccines at Place du Palais-Royal, Paris, on January 8, 2022. (Christophe Archambault/AFP)

The turnout was four times higher than the numbers who answered the December 18 call to protest, when 25,500 people marched across the country, according to government estimates.

The protests oppose a planned law that will require individuals to prove they are fully vaccinated against the coronavirus before they can eat out, travel on inter-city trains or attend cultural events.