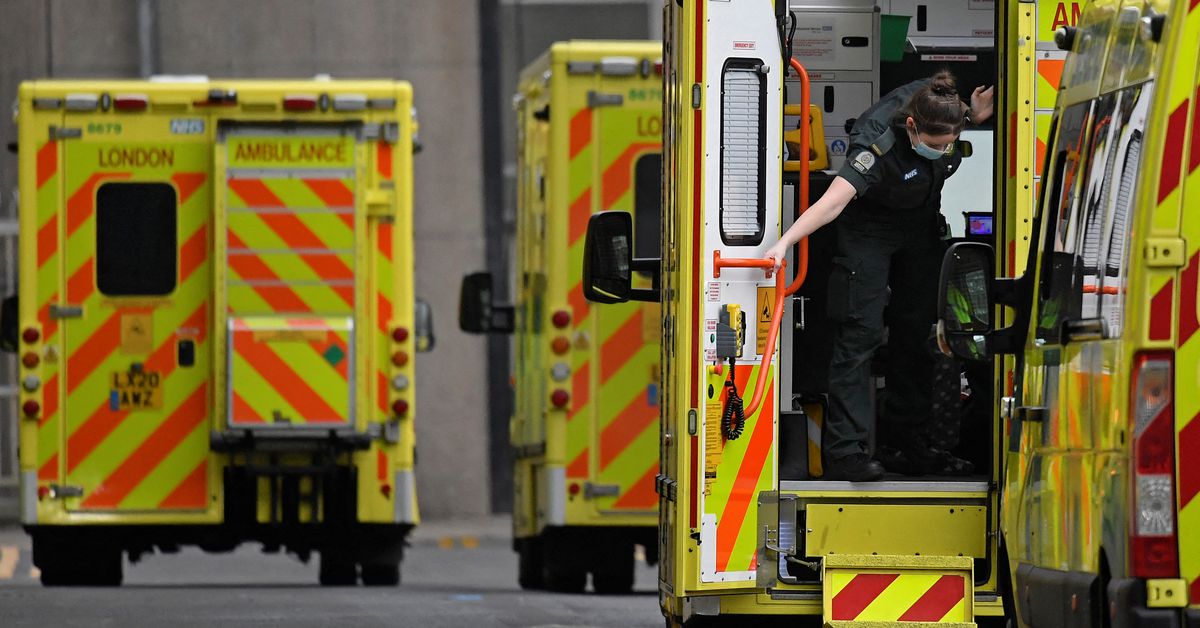 A health worker closes the door of an ambulance outside of the Royal London Hospital, amid the coronavirus disease (COVID-19) pandemic in London, Britain, January 7, 2022. REUTERS/Toby Melville

Some 313 deaths within 28 days of a positive COVID-19 test were reported on Saturday, taking the total number of fatalities on this measure to 150,057.

A broader but less timely measure of deaths with COVID-19 on the death certificate – which includes deaths early in the pandemic when testing was limited – stood at 173,248 as of the last data on Dec. 24.

“Coronavirus has taken a terrible toll on our country and today the number of deaths recorded has reached 150,000,” Prime Minister Boris Johnson said in a statement. “Our way out of this pandemic is for everyone to get their booster or their first or second dose if they haven’t yet.”

Britain has seen a surge of cases linked to the Omicron coronavirus variant in recent weeks, though death rates have been lower than during previous infection waves.

The government has focused on rolling out booster vaccinations – which have reached more than 60% of the population – rather than requiring a return to the lockdown measures seen earlier in the pandemic.

Some 1.227 million people tested positive for COVID-19 during the past seven days, 11% more than the week before, while the weekly number of deaths was up 38% on the week before at 1,271.

There are tentative signs the number of new cases may have peaked, with 146,390 new cases reported on Saturday, down from the record 218,724 recorded on Jan. 4.

Britain’s cumulative death toll is the second-highest in absolute terms in Europe, behind only Russia’s.

But on a per-head basis, the United States, Italy, Belgium and several countries in eastern Europe have higher cumulative death rates. Britain’s death rate is 7% higher than the European Union average, according to figures collated by Our World in Data.