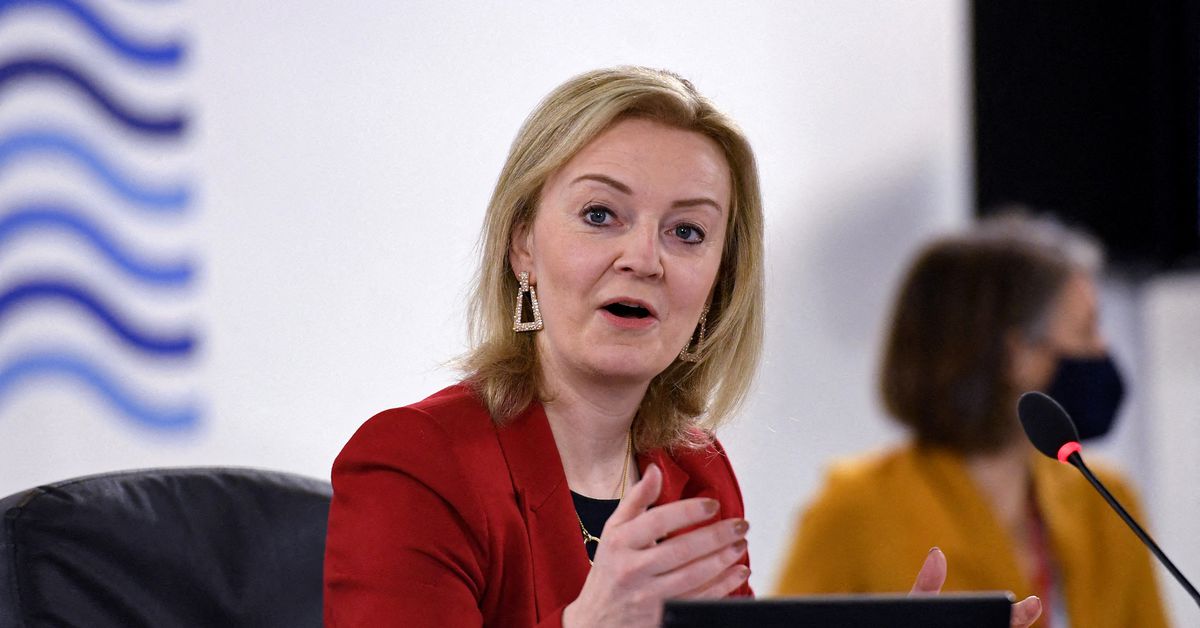 British Foreign Secretary Liz Truss speaks during a G7 foreign and development ministers session with guest countries and ASEAN nations on the final day of the summit in Liverpool, Britain December 12, 2021. Olivier Douliery/Pool via REUTERS/File Photo

LONDON, Jan 9 (Reuters) – The United Kingdom is ready to take unilateral action that would suspend customs checks on goods moving to Northern Ireland, foreign minister Liz Truss said ahead of talks with the European Union.

Truss is due to hold talks with EU Vice President Maros Sefcovic this week to resolve disagreements over post-Brexit trade arrangements for Northern Ireland, part of the United Kingdom which shares a land border with EU member Ireland.

However, there has been friction about how this applies in practice – especially for goods intended to remain within Northern Ireland – as well as the arbitration role of the EU’s European Court of Justice.

“I want a negotiated solution but if we have to use legitimate provisions including Article 16, I am willing to do that,” Truss wrote in The Telegraph newspaper.

“I will not sign up to anything which sees the people of Northern Ireland unable to benefit from the same decisions on taxation and spending as the rest of the UK, or which still sees goods moving within our own country being subject to checks.”

The European Union’s ambassador to the United Kingdom, Joao Vale de Almeida, said on Sunday the bloc was not “too impressed” with the British stance on Article 16, which allows either side to unilaterally decide to stop implementing parts of the protocol governing trade with Northern Ireland if there are substantial practical problems or trade diversion.

“We heard this before from the government, so we are not surprised, we are not too impressed but we still believe it’s not very helpful that we keep agitating the issue of Article 16,” he told Sky News.

“I think what we should focus on, at least that’s where we are focused on, is trying to find solutions.”