Patients are waiting to enter a hospital in Xi’an, Shaanxi Province on January 6, 2022. Photo: VCG

Chinese society has begun to reflect on and analyze why delayed treatments of patients resulting in tragic consequences have repeatedly occurred in Xi’an, even with two years’ experience in combating COVID-19, after Vice Premier Sun Chunlan pointed out loopholes in epidemic prevention and control in the city and stressed that patients must be treated immediately.

After Sun’s remarks late Thursday night, Xi’an health commission deputy director Zhang Bo apologized on Friday to the 13 million residents in the city for failing to properly handle the contradiction between epidemic prevention and the public demand for medical care. This came after director of the commission apologized on Thursday to an eight-month pregnant woman who lost her baby after being left waiting outside a hospital for two hours.

Doctors and analysts who believe the tragedies in Xi’an were caused by “bureaucratic delays” said local medical staff failed to assume their responsibility and save lives. Instead, they chose to rigidly enforce the rules of their superiors. But analysts stressed that Xi’an’s mismanagement in epidemic prevent and control does not mean China’s precise zero COVID-19 policy has lost its effectiveness, and Chinese grassroots governments’ governance capacity and risk management ability has been improved with their handling of local cluster infections over the two years, and holding derelict officials accountable as part of China’s comprehensive epidemic coping strategy.

Hospitals should give tests on the patients while accepting them who have not shown nucleic acid test results, and hospitals cannot refuse to take the patients for any reason, the notice said. It also asked all community medical institutions to reopen to the public.

Xi’an’s latest move was taken after Chinese Vice Premier Sun Chunlan stressed on Thursday at a meeting that people’s access to medical services must not be denied. Sun said she felt heartbroken about the incident of the pregnant woman, which also exposed loopholes in anti-epidemic work and left the local government profound lessons. Relevant department heads in Xi’an conducted self-criticism at the meeting.

The incident prompted the government of Shaanxi Province, where Xi’an is located, to set up a joint investigation team, and several officials and hospital-related persons-in-charge in Xi’an were disciplined for their poor performance. 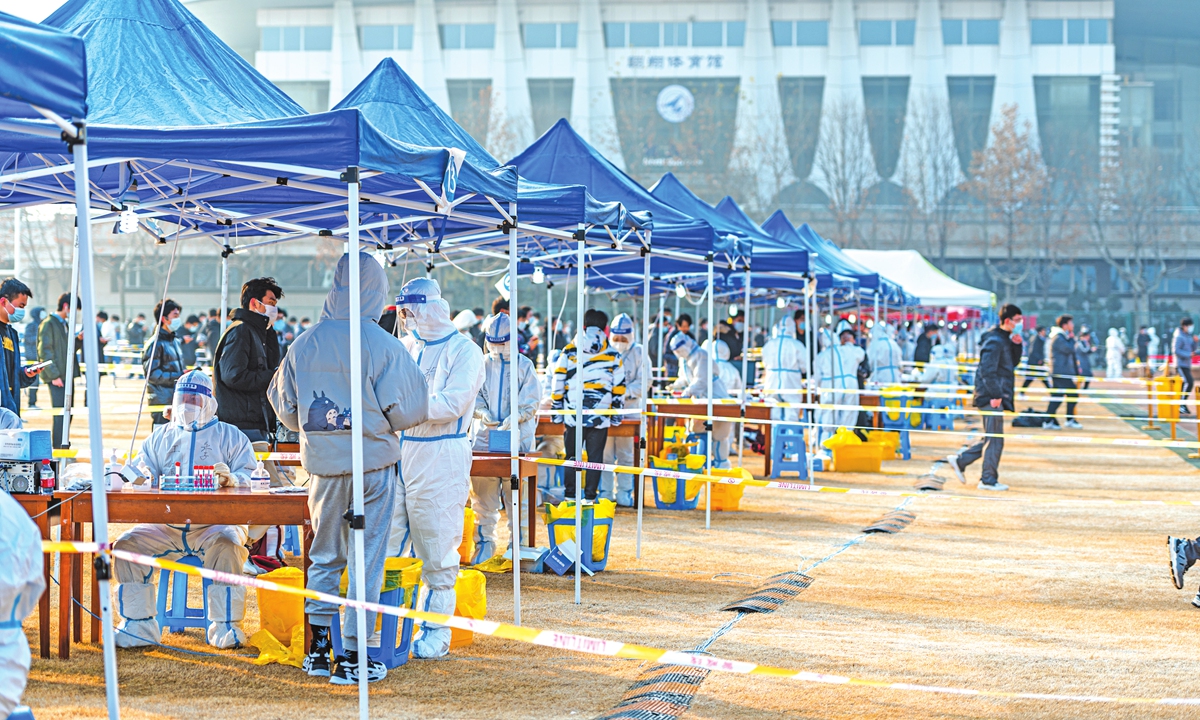 After Sun’s remarks, the Global Times learned on Friday from local hospitals, residents and communities that Xi’an has been taking measures to ensure patients will not be refused.

A local pediatrician told the Global Times on Friday on condition of anonymity that his hospital received a notice on Friday asking the hospital not to refuse any patient under any condition.

A receptionist at The Third Affiliated Hospital of Xi’an Medical University said on Friday that the hospital introduced a new policy of treating patients while testing those who did not take a COVID-19 test.

Community committees in Xi’an have also started to offer more help to pregnant women. A woman surnamed Fu who was 35 weeks pregnant in Xincheng district told the Global Times on Friday that the community committee employees collected the information of pregnant women living in her community on Thursday, and then handed out them a piece of paper with emergency contact numbers of community staff who would help them in case of medical emergencies or a lack of necessities.

She missed her antenatal appointment last week as the local health authority suggested she delay her regular appointments, citing risks of infection, and the hospital she visited regularly has suspended the service since the end of December as most of its staff were assigned to conduct nucleic acid testing at different communities, she said. But on Friday, she found that the hospital issued a notice to reopen the necessary departments to the public, including pediatrics and obstetrics departments.

While Xi’an rushed remedial measures across the city, other cities were also perfecting their measures to prevent similar tragedies.

Zhengzhou, capital city of Central China’s Henan Province, which has seen a sharp rise in COVID-19 cases, on Friday asked districts in the city to designate a medical institution with quarantine and observation services to provide medical services to residents living in the locked down areas, and the Zhengzhou People’s Hospital was asked to set up an obstetrics and gynecology emergency treatment team for pregnant women.

Zhengzhou sealed off two districts after the city identified three transmission chains – in mahjong rooms, funerals and family gatherings – with a total of 161 close contacts and 335 secondary contacts detected.

Chinese cities have introduced their own regulations on how to treat patients without a nucleic acid test certificate and set up a “green channel” for patients in urgent need after the Wuhan outbreak two years ago, and the reason that several hospitals in Xi’an still failed was largely because of “systematic irresponsibility” of different public institutions, observers said.

Many public health professionals compared the outbreak in Xi’an with that of Wuhan, calling the flare-up in Xi’an the worst since the Wuhan outbreak in 2020. A Wuhan doctor who helped treat critically ill patients told the Global Times on condition of anonymity that as early as the Wuhan outbreak, health authorities set up designated hospitals for non-COVID-19 patients and transition wards for patients who did not take nucleic acid tests. Transition wards are still in use.

But some doctors in Xi’an said they didn’t have many choices due to various restrictions.

A local pediatrician said that since the lockdown in Xi’an, he and his co-workers have been working around the clock to treat as many patients as possible, but they face restrictions. For example, there were health code requirements for patients to enter the hospital, and as the groups who implemented the policy were not those who formulated the policy, doctors like him don’t have “a big say” on this matter, and sometimes different people who carry out the policies lead to different outcomes, he said.

A taxi driver surnamed Yang who volunteered to take patients to hospitals during the Wuhan outbreak in early 2020 told the Global Times that community committees in Xi’an did not take enough responsibility in helping patients coordinate medical service, as Wuhan’s community committees worked around the clock to help patients contact hospitals and volunteers like him to take them.

Liu Yuanju, a research fellow at the Shanghai Institute of Finance and Law, told the Global Times that the medical staff in those tragedies were bureaucratic and they put more emphasis on being responsible to their superiors and rigid rules than to patients who stood in front of them in urgent need of medical treatment.

Several leaders in the hospital involved in the pregnant woman case have either been removed or suspended.

Yang Xuedong, a professor of political science at Tsinghua University, told the Global Times that since similar cases have been reported this week, the local Xi’an governments would need to hold more officials with malpractices accountable based on Communist Party of China (CPC) disciplines and laws as it’s an important part of China’s overall COVID-19 policy.

Xie Maosong, senior research fellow at the China Institute for Innovation and Development Strategy, told the Global Times that many officials were punished for neglecting their duty rather than breaking laws as Party discipline is stricter than the law.

Xi’an has punished 26 officials in this wave of epidemic resurgence. In the summer of 2021, China penalized 70 officials amid the Delta resurgence in Guangdong and Jiangsu provinces in less than a month.

Chinese President Xi Jinping stressed on various occasions that China puts the people first in combating COVID-19, for nothing in the world is more precious than people’s lives. Over the past two years, Chinese cities have been improving their epidemic response based on experience and lessons from precious outbreaks.