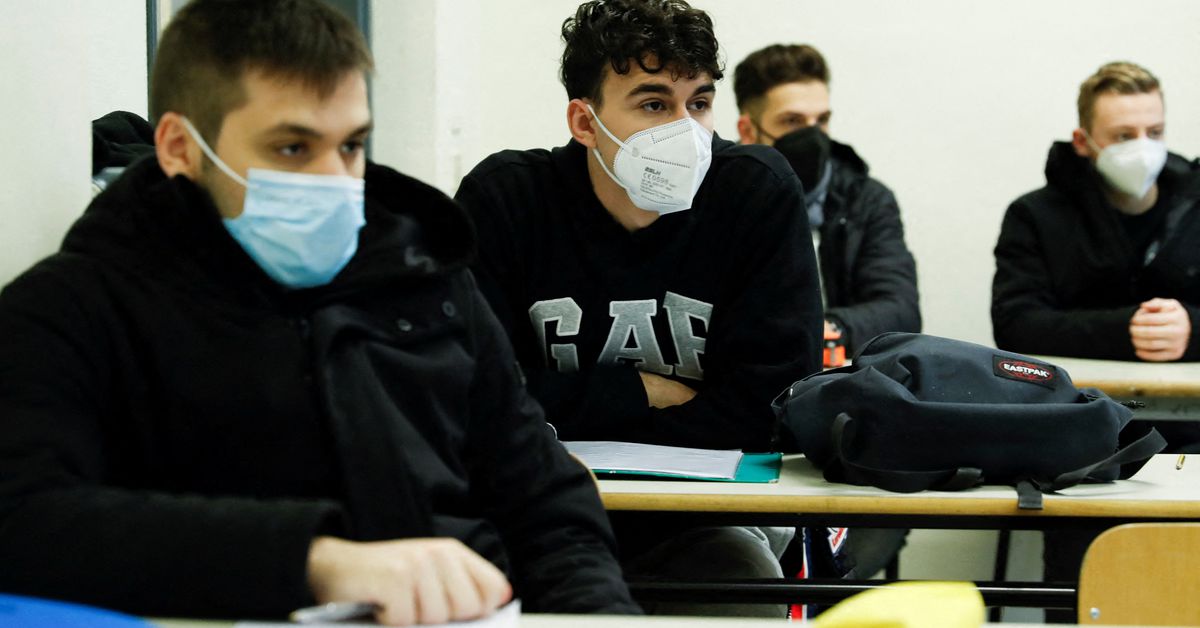 Even though a record surge in infections has yet to peak in Europe, Spanish Prime Minister Pedro Sanchez said the time was right to start evaluating the disease’s evolution “with different parameters”. read more

The mass return of children to school after the Christmas holidays is evidence that few wish to see a return to the online-only learning that marked some of the early waves of infection.

Even as France registered a record seven-day average of almost 270,000 cases a day, it eased testing protocols for schoolchildren, saying too many classes were closed. read more

In Uganda, students returned to institutions shut nearly two years ago. The lockout helped to control the pandemic – with only 3,300 deaths recorded – but the government estimates about a third of pupils will never return.

“We faced temptations,” said 16-year-old Rachael Nalwanga, happily returning to classes while many of her former schoolmates worked in new jobs or cared for new babies. “It has not been easy for me to keep safe at home for this long but I thank God,” she told Reuters in the town of Kayunga. read more

Governments in Europe also imposed severe lockdowns in the first phases of the pandemic — with enormous damage to economies — but now want to avoid that, knowing that Omicron is putting far fewer people in hospital, not least because many or most are vaccinated.

They are also suffering immediate staff shortages in essential services as Omicron drives a surge in positive tests.

In France, the number of people in hospital with COVID-19 rose by 767, the biggest increase since last April 2021, although the total number, at 22,749 was still around two-thirds of the peak, set in November 2020.

Britain began using military personnel to support healthcare and alerted its biggest private health company that it might be required to deliver treatments including cancer surgery. read more

Spain was bringing back retired medics. In Italy, the challenge of nearly 13,000 health workers being absent with positive COVID-19 tests was compounded by suspensions for non-vaccination.

Britain, Switzerland, Spain and Belgium have all slashed quarantine periods and eased conditions for staff to return to work.

The Czech Republic followed suit on Monday, saying critical staff including teachers, social workers and doctors could keep working even after testing positive.

Since before Christmas, Spain has let staff return to work without taking a test.

Students sit in a classroom as they resume classes at the I.T.C Di Vittorio – I.T.I. Lattanzio secondary school as coronavirus disease (COVID-19) cases surge across the country and with new rules in place as part of the government’s efforts to maintain in-person learning, in Rome, Italy, January 10, 2022. REUTERS/Remo Casilli

The Health Ministry has also set a viral load threshold below which an infected person who takes a PCR test can be considered non-infectious, and so fit to work – enabling medics, social workers and some police to report for duty even if they test positive.

As school classes resumed in Spain, Italy, Portugal, the Netherlands and parts of Germany, youngsters faced an array of measures, from masks and fans in classrooms to parents not being allowed past the gates and the prospect of a return to home learning if case numbers exceeded certain limits.

‘PART OF OUR LIVES’

Some parents fretted that their children might be exposed, but others were relieved.

“I think this (virus) will always be part of our lives so it’s important for them to socialise,” said Ana Amado, 33, dropping off her 11-year-old, Miguel, at a school in Lisbon.

And increasingly, there is hope of an end to the nightmare.

The variant is waning in southern Africa, where it was first detected in November.

“Pandemics don’t end with a huge boom but with small waves because so many have been infected or vaccinated,” Rafael Bengoa, also co-founder of Bilbao’s Institute for Health and Strategy, told Reuters. “After Omicron we shouldn’t have to be concerned with anything more than small waves.”

Passions over vaccines have been stoked by the saga of Serbia’s world tennis number one, Novak Djokovic. He was freed from immigration detention after winning a legal case to stay in Australia where he is chasing a record-breaking 21st Grand Slam.

Djokovic, an opponent of mandatory vaccination, had been held in a row over a medical exemption to let him play in the Australian Open. read more

There were political frictions in France, too, where ruling party member Stephane Claireaux said he had been attacked by protesters demonstrating against COVID health passes. read more

Australia, which had been relatively shielded, surpassed 1 million cases, with more than half occurring in the past week.

India, too, has seen an eight-fold rise in daily infections over the past 10 days, though hospitalisations are far lower than in the previous wave driven by the Delta variant. read more