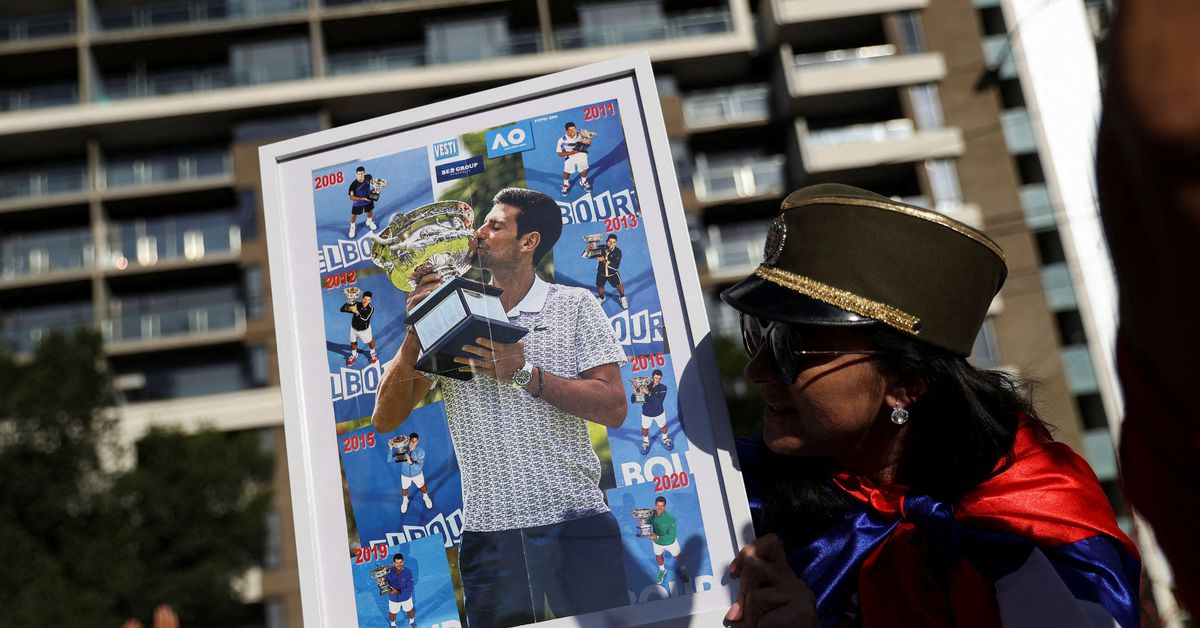 MELBOURNE, Jan 10 (Reuters) – World tennis number one Novak Djokovic tweeted a picture of himself practicing at Melbourne’s Rod Laver Arena hours after winning a court challenge on Monday to remain in Australia.

The fight over his medical exemption from COVID-19 vaccination may not be over, however, as the Australian government said it was still considering another move to deport him.

“I am pleased and grateful that the judge overturned my visa cancellation,” Djokovic wrote on Twitter. “Despite all that has happened I want to stay and try to compete at the Australian Open.”

Earlier Judge Anthony Kelly had ruled the federal government’s decision last week to revoke the Serbian tennis star’s visa amid was “unreasonable” and ordered his release.

“Novak is free and just a moment ago he went to the tennis court to practice,” Djokovic’s brother Djordje told a family news conference in Belgrade. “He’s out there to set another record.”

Djokovic himself, who arrived in Australia last week in pursuit of a record 21st Grand Slam title at the Australian Open from Jan. 17, had spent the day at his lawyers’ chambers.

There were chaotic scenes on Monday evening as supporters who had gathered outside the lawyers’ office chanting “Free Novak!” surged around a black car with tinted windows leaving the building, while police at one stage used pepper spray as they tried to clear a path. read more

A spokesman for Immigration Minister Alex Hawke said he was considering using his broad discretionary powers he is given by Australia’s Migration Act to again revoke Djokovic’s visa.

The controversy has been closely followed around the world, creating diplomatic tensions between Belgrade and Canberra and sparking heated debate over national vaccination rules.

Serbia’s parliamentary speaker, Ivica Dacic, said he was concerned Hawke could still deport Djokovic, a move that would bar the 34-year-old from the country for three years.

“The process should have ended when the court ruled on the matter,” Dacic told Serbia’s Happy TV. “It defies common sense.”

Spanish rival Rafa Nadal called the drama surrounding the build-up to the tournament a “circus”.

A supporter of Serbian tennis player Novak Djokovic holds his photo during a rally outside the Park Hotel, where the star athlete is believed to be held while he stays in Australia, in Melbourne, Australia, January 9, 2022. REUTERS/Loren Elliott

“Whether or not I agree with Djokovic on some things, justice has spoken and has said that he has the right to participate in the Australian Open and I think it is the fairest decision,” Nadal told Spanish radio Onda Cero.

Judge Kelly said he had quashed the decision to block Djokovic’s entry to Australia because the player was not given enough time to speak to tennis organisers and lawyers to respond fully after he was notified of the intent to cancel his visa.

Officials at Melbourne’s airport, where Djokovic had been detained on arrival late on Wednesday, reneged on an agreement to give Djokovic until 8.30 a.m. to speak to tournament organiser Tennis Australia and lawyers, Kelly said.

Djokovic was instead woken by officials around 6.00 a.m. after a brief rest and said he felt pressured to respond. The player, long an opponent of mandatory vaccination, told border officials he was unvaccinated and had had COVID-19 twice, according to a transcript of the interview.

Kelly earlier told the court it appeared Djokovic had sought and received the required medical exemption from COVID-19 vaccination on the basis that he had contracted the virus last month. He had presented evidence of this before he travelled to Melbourne and when he landed on Wednesday evening.

“What more could this man have done?” Kelly said.

Kelly’s ruling did not directly address the issue of whether the exemption on the grounds of an infection in the past six months was valid, which the government had disputed.

Tennis Australia CEO Craig Tiley said earlier that his organisation had spoken with federal and state officials for months to ensure the safe passage of players. Tennis Australia did not immediately respond to a request for comment.

Though news of the ruling was greeted with drums and dancing by around 50 supporters outside the Melbourne court, wider public opinion in Australia, where more than 90% of the adult population is double vaccinated, has been largely against the player.

The country’s COVID-19 cases surpassed 1 million on Monday, with more than half recorded in the past week, driving up hospitalisation numbers, straining supply chains and overloading testing facilities.

The saga kicked off when Djokovic posted a photo of himself leaning on his luggage on Instagram last Tuesday, telling the world he was headed to Australia with a vaccination exemption.