A dog that ran off from his owner during the Caldor Fire near South Lake Tahoe in August has been brought home after a skier spotted the lost pup in a deep snowdrift last month.

Russ, a pit bull-terrier mix, was spooked and ran away from his owner a traveling nurse from Southern California who had been working at a nearby hospital.

The owner, from Riverside County, went searching for Russ, hung fliers and reported him missing before being forced to evacuate the area due to the Caldor Fire that was ragging through California destroying 222,000 acres and more than 1,000 structures over 67 days.

His owner assumed that Russ was lost for good. 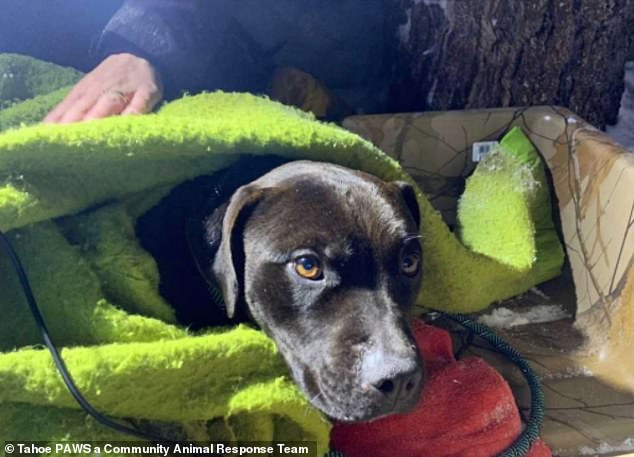 Russ, a pit bull-terrier mix, was rescued after four months of being lost in the California woods 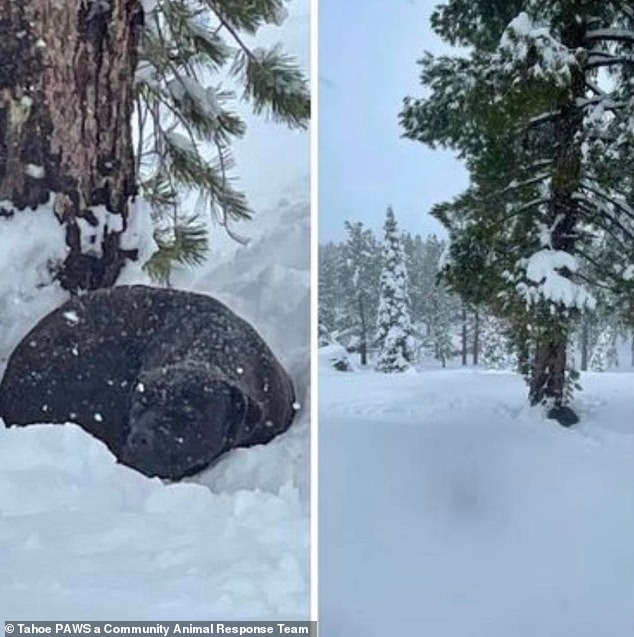 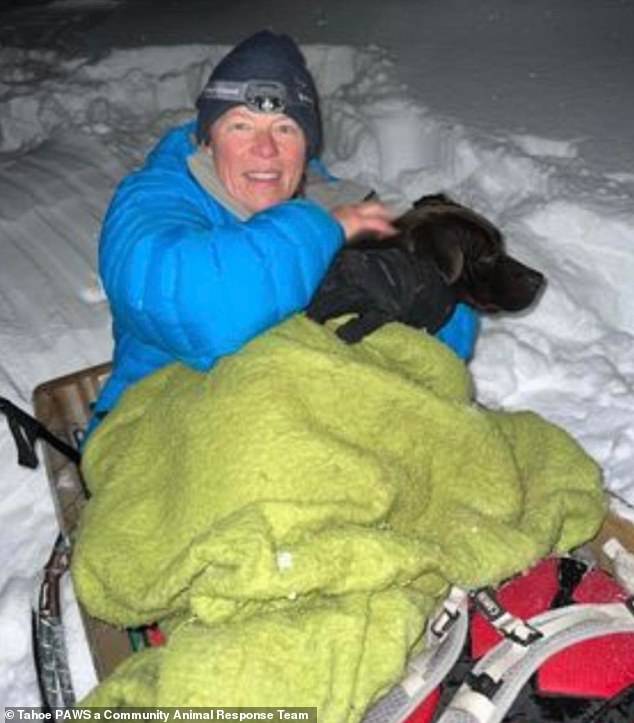 But on December 16, animal search and rescue non-profit group, TLC 4 Furry Friends learned of a dog that was stuck in several feet of snow near Twin Peaks, west of South Lake Tahoe.

Skiers reported that the canine appeared to be stuck in the snowdrift and growled at anyone who came near him.

El Dorado County Animal Services Officer Kyle Shumaker was notified of the animal but unable to reach him through the five-foot snow depth and steep terrain.

Instead, TLC 4 Furry Friends volunteers geared up and embarked on their own rescue mission up the mountain.

When Allen arrived to the scene, temperatures were expected to drop to -2 degrees Fahrenheit by evening in the area filled with nearly five feet of fresh snow.

She hiked up the mountain in her snowshoes following the dog tracks, with her volunteer partner, Elsa Gaule following close behind with animal service sled.

‘I looked up in my headlamp and saw this dark blob in the snow under the tree well, and I thought, ‘Oh my gosh it’s the dog and he’s not alive anymore,’ Allen told The San Francisco Chronicle.

The dog was found under a tree not moving but eventually opened his eyes and lifted his head as the volunteers worked to remove him from the heavy snow.

‘I walked up, and all of a sudden he opened his eyes and lifted his head, and I screamed. It was just involuntary,’ Allen said.

Gaule quickly gained the trust of the scared dog and wrapped him blankets. The two rescuers brought the lost dog down the mountain riding on the sled in Allen’s arms.

‘We were laughing so hard, No. 1 because the dog was still alive, but No. 2, we were laughing at our situation,’ Allen recalled the nearly two-hour frozen hike down the mountain to meet Officer Shumaker. 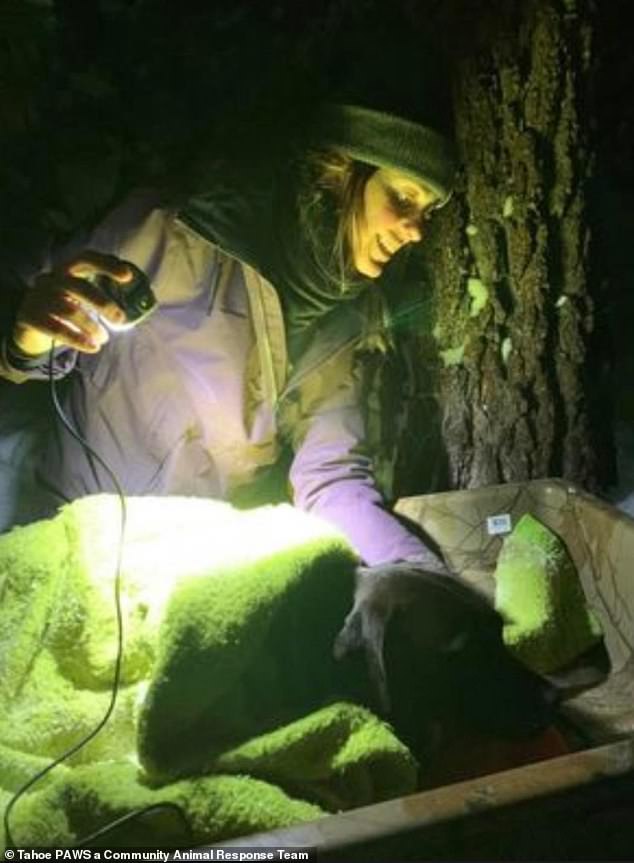 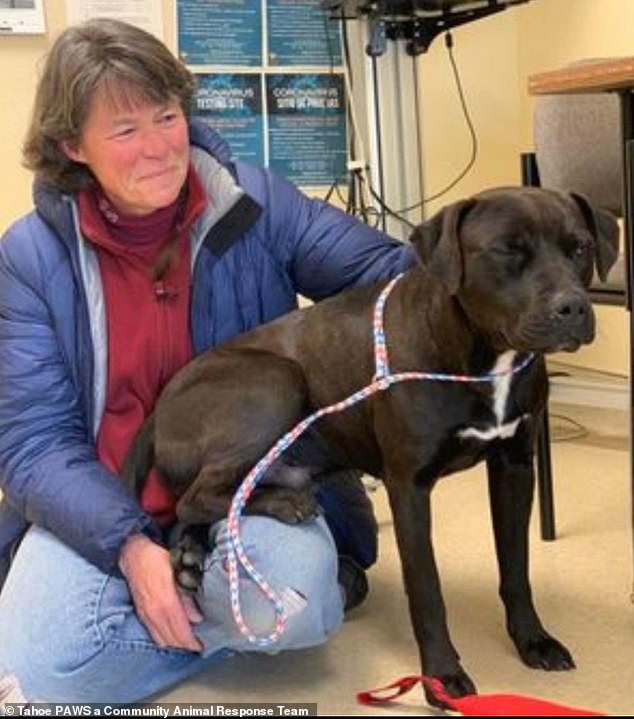 Russ’s owner was ‘ecstatic’ to be reunited with his dog who he did not expect to see again. The dog survived the Caldor Fire, five-feet of snow and negative temperatures

‘Elsa called it, ‘Tobogganing the moonlight.’ That sounds a little bit more romantic than what it is,’ Allen said of the slow and methodical return to the base.

Allen removed her own jacket to replace the wet blankets and warm the shivering dog who was brought the a veterinarian who confirmed the dog was in good health.

‘I’ve worked some pretty gnarly rescues, this probably being the top,’ Allen admitted.

‘I keep reliving the moment when he opened his eyes and lifted his head, and just the joy and elation inside of me was overwhelming. It’s one more life that gets to live happy and warm and safe,’ she said.

It was discovered that the dog had a microchip which allowed workers to track down Russ’s owner. Allen and Gaule visited Russ everyday until he was reunited with his owner.

‘When contacted, the owner was ecstatic to find out that his dog was alive!’ TLC 4 Furry Friends officials said.

Sorgente articolo:
Dog that ran off from its owner is found alive FOUR MONTHS later stuck in a snowdrift – Daily Mail