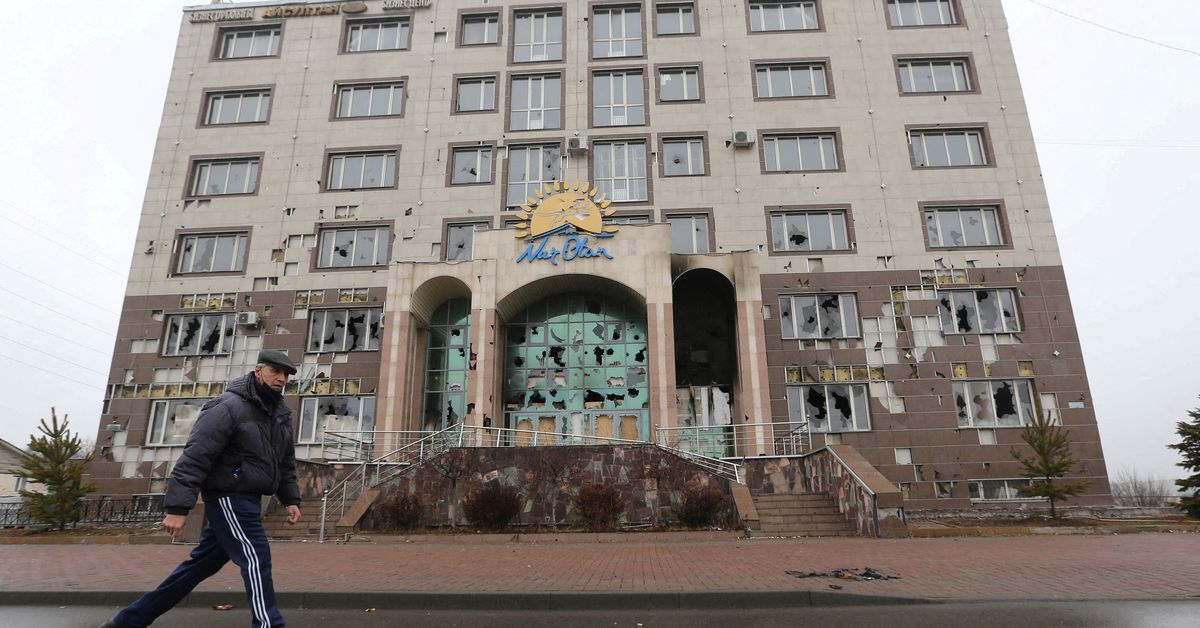 A man walks past the office building of the Nur Otan ruling party, which was damaged during mass protests triggered by fuel price increase, in Almaty, Kazakhstan January 8, 2022. REUTERS/Pavel Mikheyev/File Photo

LONDON, Jan 9 (Reuters) – Kazakhstan’s president must move fast to consolidate his grip after breaking with his powerful predecessor as the country was racked last week by the deadliest violence in its 30 years of independence from Moscow, a former prime minister said on Sunday.

As protesters torched buildings in the biggest city Almaty last Wednesday, President Kassym-Jomart Tokayev removed former leader Nursultan Nazarbayev as head of the powerful Security Council – a role in which Nazarbayev, 81, had continued to pull the strings despite handing over the presidency in 2019.

With 164 people reported killed and more than 6,000 detained as part of what Tokayev has called a counter-terrorist operation, a purge of the security apparatus is now under way in the oil- and uranium-producing Central Asian state. read more

Former prime minister Akezhan Kazhegeldin told Reuters that Tokayev, having ruled since 2019 in the shadow of the man who dominated the country for the previous three decades, needed to dispel doubts about who was really in charge.

“I think a lot of people in social networks, critics, continue to say he’s a nominee of Nazarbayev, that Nazarbayev is standing behind his back and manipulating him,” he said.

“Now he has complete formal executive power, the question is how he will deploy it. He needs to take command.”

Kazhegeldin served as prime minister under Nazarbayev in the 1990s, when Tokayev was foreign minister, but quit over concerns about corruption and now lives in exile in Britain.

He urged Tokayev to investigate quickly, bring those responsible for the violence to justice, and listen to people’s demands for reform.

“If he does it in a short time, he can count on citizens’ support in elections. If he doesn’t, people will blame all the problems and everything that’s happened recently on him.”

Nazarbayev, a former Communist Party boss, amassed substantial wealth during his decades in charge, wielding power through what Kazhegeldin described as a clan system.

He said the “embittered” Nazarbayev faction would attempt to remobilise if given the chance.

“The people who have just been defeated are very rich. They have huge capital abroad, including in Britain,” he said.

“This money must be returned to the country and used to develop the economy. If this isn’t done these people will use the money to destabilise the situation in the country.”

Nazarbayev could not be reached for comment but his spokesman issued a statement on Sunday in an apparent attempt to quash the impression of a rift between him and Tokayev.

He said the former president had chosen to give up his security council post to Tokayev to help ease the crisis, and the two men had always been “on the same side of the barricades”. read more