A giant ‘sea dragon’ discovered in the Midlands has been hailed as one of the greatest finds in British fossil history.

The ichthyosaur, spotted at the bottom of the Rutland Water, is the largest and most complete skeleton found in the UK, at 32 feet (10metres) in length, with a skull weighing a ton.

The new specimen, which lived approximately 180million years ago, was found at the largest reservoir in England as conservationists drained water to improve the habitat for breeding birds.

Joe Davis, 48, from Leicestershire and Rutland Wildlife Trust, who found the skeleton, said: ‘My colleague thought the ridges we saw at the muddy bottom of the reservoir were probably just pipes.

‘When the palaeontologists and our team uncovered the full skeleton and lifted it out using a tractor with a loader, the head was as large as me, and I am six-feet tall. It’s a tremendous beast.’ 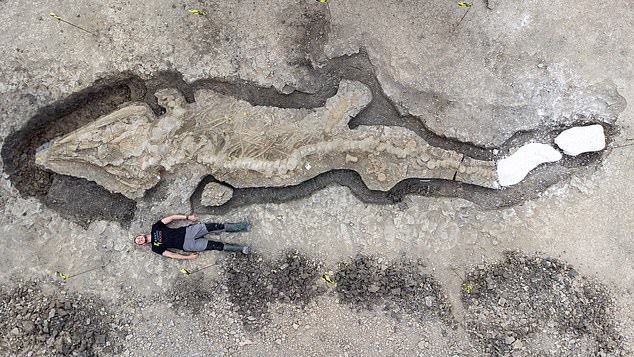 Historic: A giant ‘sea dragon’ discovered in the Midlands by wildlife trust worker Joe Davis (pictured with the skeleton) has been hailed as one of the greatest finds in British fossil history

The first ichthyosaurs (pictured) were discovered by palaeontologist Mary Anning in the 19th century. They are often called ‘sea dragons’ because of the size of their teeth and eyes

The ichthyosaur is believed to be a species called Temnodontosaurus trigonodon. But if it is found to be a new species, it could be named after Mr Davis.

Dr Dean Lomax, a world expert on ichthyosaurs from the University of Manchester who spent 14 days excavating the fossil, hailed it as ‘one of the greatest finds in British palaeontological history’.

He said: ‘Despite the many ichthyosaur fossils found in Britain, it is remarkable to think that the Rutland ichthyosaur is the largest skeleton ever found in the UK.

‘It is a truly unprecedented discovery and one of the greatest finds in British palaeontological history.’

Ichthyosaurs, which were marine reptiles, first appeared around 250 million years ago and went extinct 90 million years ago, varying in size from one to more than 25 metres in length and resembling dolphins in general body shape.

The remains were dug out by a team of expert palaeontologists from around the UK in August and September. 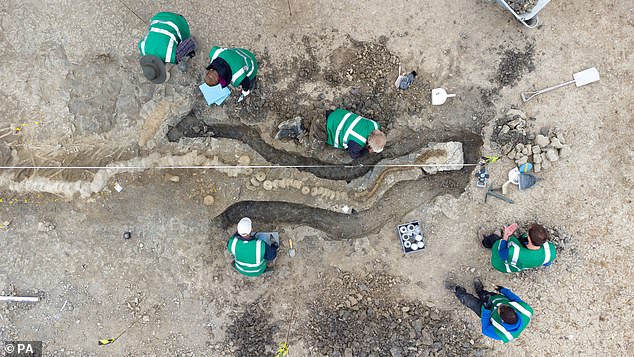 Pictured: team of experts working on the Ichthyosaur skeleton at Rutland Nature Reserve

Ichthyosaurs had the largest eyes of any vertebrate animal – up to 10in-wide eyeballs.

The biggest were the size of a blue whale and could swim at 25mph.

Their sharp, needle like teeth were used to catch squid and molluscs.

Ichthyosaurs had fingers and toes, but these became encased in skin to form flippers.

Two incomplete and much smaller ichthyosaurs were found during the initial construction of Rutland Water in the 1970s. However, the latest discovery is the first complete skeleton.

After being discovered in February last year the new specimen was removed in August so as not to disrupt the birds at the nature reserve.

Dr Mark Evans of the British Antarctic Survey said: ‘I’ve been studying the Jurassic fossil reptiles of Rutland and Leicestershire for over 20 years.

‘When I first saw the initial exposure of the specimen with Joe Davis I could tell that it was the largest ichthyosaur known from either county.

‘However, it was only after our exploratory dig that we realised that it was practically complete to the tip of the tail.’

He added: ‘It’s a highly significant discovery both nationally and internationally but also of huge importance to the people of Rutland and the surrounding area.’

Nigel Larkin, a specialist palaeontological conservator, said: ‘It’s not often you are responsible for safely lifting a very important but very fragile fossil weighing that much. 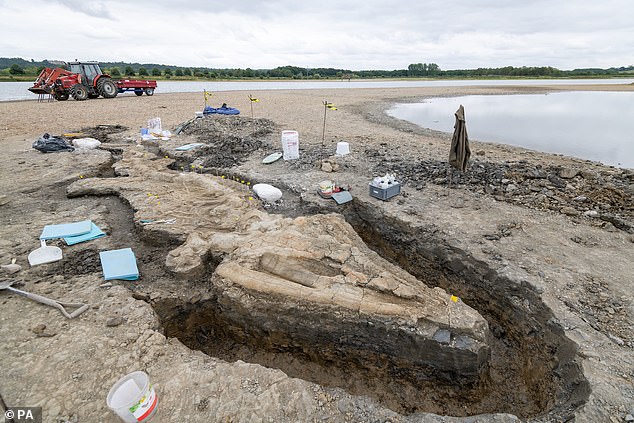 ‘It is a responsibility, but I love a challenge. It was a very complex operation to uncover, record, and collect this important specimen safely.’

The find comes amid a flurry of interest in the reptiles, which are nicknamed sea dragons because of their large teeth and eyes.

The first ichthyosaurs were discovered by fossil hunter and palaeontologist Mary Anning in the early 19th century.

Anning uncovered the first ichthyosaur known to science aged 12 and was the subject of Ammonite, a 2020 film starring Kate Winslet.

The excavation will feature on BBC2’s Digging For Britain tomorrow at 8pm.