Long lines were seen on Sunday at COVID-19 testing facilities throughout the country after new rules came into effect, with Health Ministry service and information centers malfunctioning and some Israelis reportedly refusing to take home antigen tests and “voluntarily” put themselves in quarantine.

Under the new testing regulations, those who are over 60 or at high risk are prioritized at PCR testing stations. Those who are under 60 and fully vaccinated are encouraged to conduct a rapid antigen test, either at home or at a testing station, and can use those results to get exemptions from quarantine if they are exposed to a confirmed coronavirus carrier.

Israelis have been swamping drugstores to purchase home antigen tests as the new rules took effect, though some health experts warned that they are far less accurate than PCR tests — particularly when it comes to detecting the Omicron strain of the coronavirus.

The new rules came amid a huge surge in infections driven by the highly infectious Omicron, which had strained PCR testing centers to the limit as more and more people came to get tested after coming into contact with carriers.

Since the change, antigen test centers have been flooded with people coming to get tested. On Sunday, some people reported waiting over three hours at a Jerusalem center in Ein Yael. Meanwhile, pharmacies have reported shortages of home test kits.

Several Hebrew media outlets reported that the Health Ministry’s phone hotline for inquiries about testing and the Green Pass rules collapsed, with people waiting for long periods of time to no avail. Some calls quickly got disconnected, and no service was given via the ministry’s WhatsApp service.

Ynet cited the ministry department handling the hotline as saying it was receiving about 45,000 calls every day, “which indeed creates heavy traffic.”

Many people have been trying to get information about the new testing rules, unclear on whether or when they should quarantine or get tested. 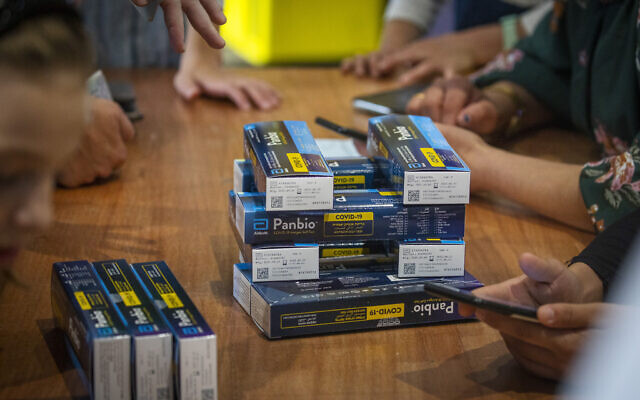 The Walla news site quoted several people as saying that since the new rules put the responsibility for getting tested on the general population, without enforcement, they don’t intend to get tested unless forced to.

“I had the disease in the past and the illness wasn’t terrible at all. What was terrible was the quarantine,” said a 22-year-old woman from Jerusalem identified only as Ariel. “I feel like there’s no reason for me to voluntarily put myself in 10 days of quarantine when I see [the virus] doesn’t affect my young friends. It feels like everyone is sick already. I will just take care not to see my grandparents in the next few weeks.”

The interviewees also cited other reasons not to get tested, including the unreliability of antigen tests — especially against the Omicron strain — the price of home test kits, and the lack of compensation for lost workdays.

The number of COVID-19 patients listed as seriously ill rose to 206, according to Health Ministry figures released Sunday. That figure was nearly double the 112 patients in serious condition recorded a week earlier. The number of hospitalizations rose from 338 a week ago to 524.

While the daily tally of 17,521 new cases Saturday was a slight dip from Friday’s record-setting 18,831 new cases, the test positivity rate climbed to levels not seen in over a year. Case numbers generally dip over the weekend due to vagaries in testing.

The positivity rate of 11.71 percent was the highest recorded since October 2020, though it came as Israel began accepting the less-accurate rapid antigen tests, while saving the more accurate PCR tests for over-60s and the unvaccinated, to reduce crowding at testing stations.

The death toll remained at 8,259, with no change since Friday.