Opposition leader Benjamin Netanyahu was reprimanded Sunday by a judge who rejected his request to delay the time of a hearing in his lawsuit against fellow former prime minister Ehud Olmert.

In May, Netanyahu’s family filed a defamation lawsuit against Olmert for calling the then-prime minister, his wife Sara, and eldest son Yair “mentally ill” in interviews.

The suit seeks NIS 837,000 (some $257,000) in damages for Olmert’s “obsessive efforts to harm their good name in public, out of jealously and deep frustration.”

On Sunday, Netanyahu requested that the first hearing in the case — scheduled for Monday — be pushed off from 9 a.m. to 10 a.m. in order to account for delays due to security.

The judge rejected the request, noting that the time and date had been set back in late October, but Netanyahu waited until a day in advance to request a delay.

Yariv noted that any parties to the case who do not appear in court at the appointed hour would be considered to be violating his order setting the hearing date for Monday. 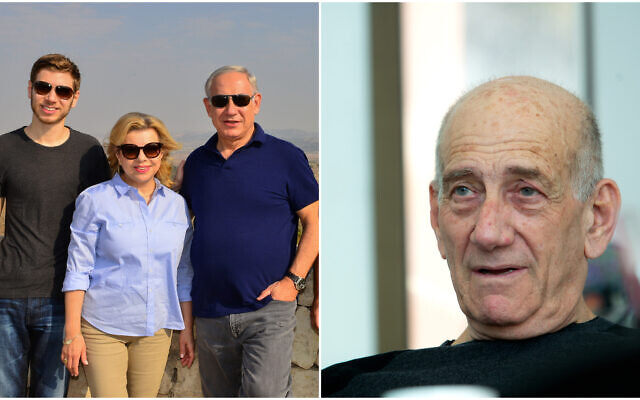 In two separate interviews, one with Channel 12 and another with the news site Democrat TV, Olmert leveled criticism at Netanyahu and said that “what is irreparable is the mental illness of the prime minister, his wife, and his son,” referring to Yair Netanyahu.

“They are in need of psychiatric treatment,” Olmert told the news site in April.

In response to the lawsuit, Olmert said at the time that he was “amused by the band of wackos.”

Olmert has argued in his defense that his opinion reflects the atmosphere in parts of the public, and also that the words he used were not slander.