POZNAN, Poland (AFP) — Curators combing through a vast historical archive of Freemasonry in Europe amassed by the Nazis in their wartime anti-Masonic purge say they believe there are still secrets to be unearthed.

From insight into women’s Masonic lodges to the musical scores used in closed ceremonies, the trove — housed in an old university library in western Poland — has already shed light on a little-known history.

But more work remains to be done to fully examine all the 80,000 items that date from the 17th century to the pre-World War II period.

“It is one of the biggest Masonic archives in Europe,” said curator Iuliana Grazynska, who has just started working on dozens of boxes of papers within it that have not yet been properly categorized.

“It still holds mysteries,” she told AFP of the collection, which curators began going through decades ago and is held at the UAM library in the city of Poznan.

Initially tolerated by the Nazis, Freemasons became the subject of regime conspiracy theories in the 1930s, seen as liberal intellectuals whose secretive circles could become centers of opposition.

Lodges were broken up and their members imprisoned and killed both in Germany and elsewhere as Nazi troops advanced during WWII. 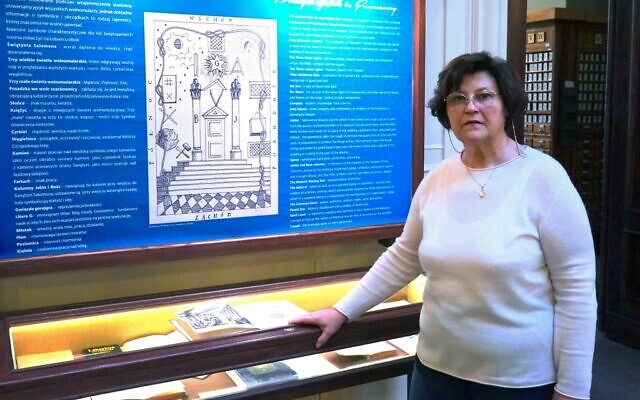 Collection curator Iuliana Grazynska poses during an exhibition on a historic archive of Freemasonry in Europe amassed by the Nazis at the Poznan University Library in Poznan, western Poland on December 22, 2021. (JANEK SKARZYNSKI / AFP)

The collection was put together under the orders of top Nazi henchman and SS chief Heinrich Himmler and is composed of many smaller archives from European Masonic lodges that were seized by the Nazis.

It is seen by researchers as a precious repository of the history of the day-to-day activities of lodges across Europe, ranging from the menus for celebrations to educational texts.

Fine prints, copies of speeches and membership lists of Masonic lodges in Germany and beyond feature in the archive. Some documents still bear Nazi stamps.

“The Nazis hated the Freemasons,” Andrzej Karpowicz, who managed the collection for three decades, told AFP.

Nazi ideology, he said, was inherently “anti-Masonic” because of its anti-intellectual, anti-elite tendencies.

The library puts some select items on show, including the first edition of the earliest Masonic constitution written in 1723, six years after the first lodge was created in England.

“It’s one of our proudest possessions,” Grazynska said.

The oldest documents in the collection are prints from the 17th century relating to the Rosicrucians — an esoteric spiritual movement seen as a precursor to the Freemasons whose symbol was a crucifix with a rose at its center. 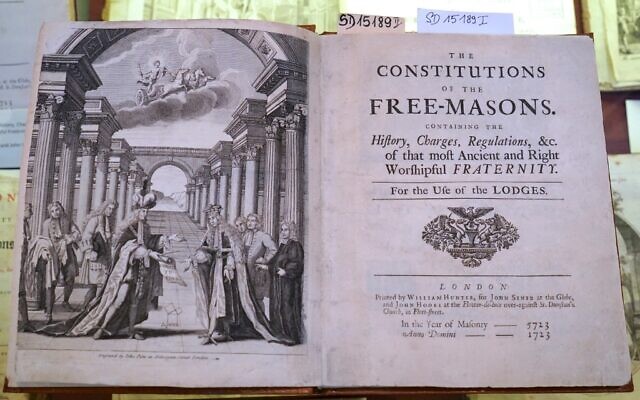 A copy of the work ‘The Constitutions of the Free-Masons’, the first Masonic constitution written by James Anderson and published in 1723, on display during an exhibition on a historic archive of Freemasonry in Europe amassed by the Nazis at the Poznan University Library in Poznan, western Poland on December 22, 2021. (JANEK SKARZYNSKI / AFP)

During the war as Allied bombing intensified, the collection was moved from Germany for safekeeping and broken up into three parts; two were taken to what is now Poland and one to the Czech Republic.

The section left in the town of Slawa Slaska in Poland was seized by Polish authorities in 1945, while the others were taken by the Red Army.

In 1959, the Polish Masonic collection was formally established as an archive and curators began studying it — at that time, Freemasonry was banned in the country under Communism.

The collection is open to researchers and other visitors, who have included representatives of German Masonic lodges wanting to recover their prewar history.

It is “a mine of information in which you can dig at will,” said Karpowicz.