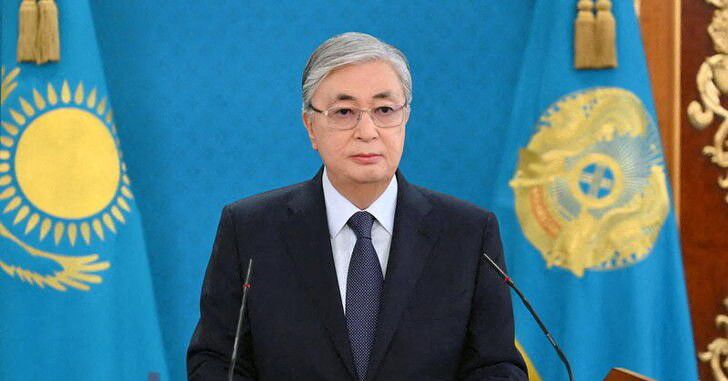 Kazakh President Kassym-Jomart Tokayev speaks during a televised address to the nation following the protests triggered by fuel price increase in Nur-Sultan, Kazakhstan January 7, 2022. Official website of the President of Kazakhstan/Handout via REUTERS

NUR-SULTAN, Jan 10 (Reuters) – Kazakh President Kassym-Jomart Tokayev said on Monday that his country had weathered an attempted coup d’etat coordinated by what he called “a single centre” after the most violent unrest since the Soviet collapse.

In a speech to an online meeting of the Russian-led CSTO military alliance by video link, Tokayev said that order had now been restored in Kazakhstan, but that the hunt for “terrorists” was ongoing.

“Under the guise of spontaneous protests, a wave of unrest broke out… It became clear that the main goal was to undermine the constitutional order and to seize power. We are talking about an attempted coup d’etat,” he said.

Demonstrations against a fuel price rise began just over a week ago before erupting into a wider protest against Tokayev’s government and the man he replaced as president, 81-year-old Nursultan Nazarbayev.

“The main blow was directed against (the city of) Almaty. The fall of this city would have paved the way for a takeover of the densely populated south and then the whole country,” he said. “Then they planned to seize the capital.”

Tokayev said that a large-scale “counter-terrorism” operation would soon end along with a CSTO mission that he said numbered 2,030 troops and 250 pieces of military hardware.

Tokayev defended his decision to invite Russian-led troops into the country and said that doubts over the legitimacy of that mission stemmed from a lack of information.

Kazakhstan would soon provide proof to the international community about what had happened, he said.Sixteen members of the security forces were killed, while the number of civilian casualties is still being checked, he said.