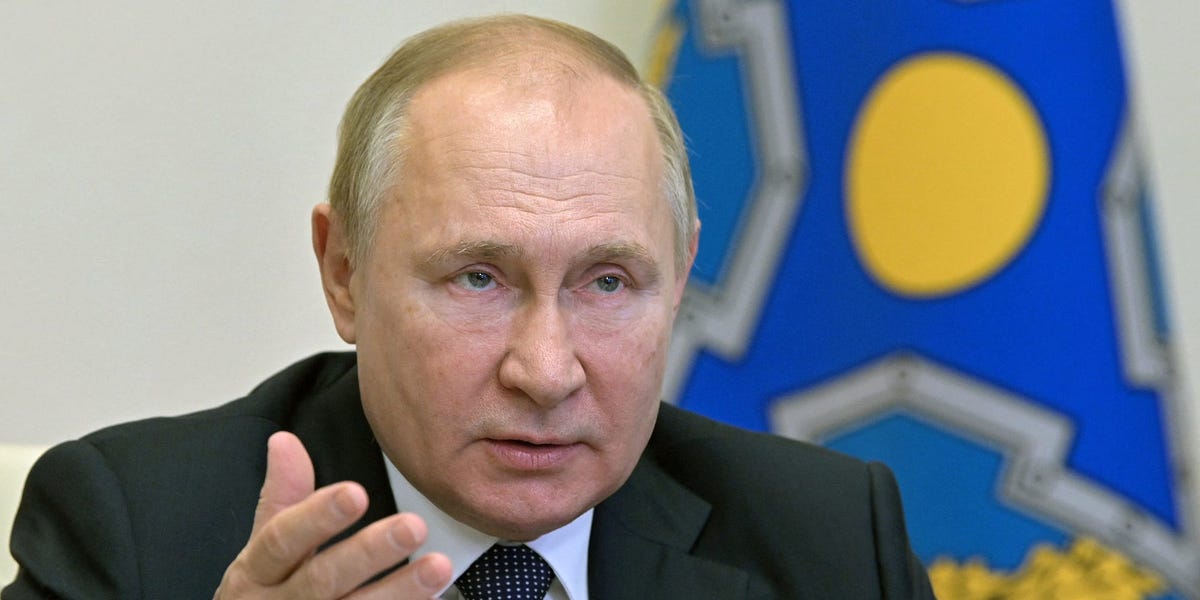 Russian President Vladimir Putin on Monday made no apologies for sending troops into Kazakhstan amid unrest linked to skyrocketing gas prices, and refused to set a deadline for pulling the forces the Kremlin-led alliance has called “peacekeepers” out of the former Soviet republic.

Putin said Kazakhstan had been targeted by terrorists, blaming the situation on unidentified external forces, per Reuters. The Russian leader pledged to stop “color revolutions” in other former ex-Soviet states, a reference to pro-democracy uprisings that have happened in places like Georgia, Belarus, and Ukraine.

“Of course, we understand the events in Kazakhstan are not the first and far from the last attempt to interfere in the internal affairs of our states from the outside,” he said during a virtual summit. “The measures taken by the CSTO have clearly shown we will not allow the situation to be rocked at home.”

The Collective Security Treaty Organization (CSTO), which includes Russia, Armenia, Belarus, Kazakhstan, Kyrgyzstan, and Tajikistan (all formerly part of the Soviet Union), is a Moscow-led security alliance that has been compared to NATO.

Putin said the CSTO alliance was able to successfully “prevent the undermining of the foundations of the state, the complete degradation of the internal situation in Kazakhstan, and block terrorists, criminals, looters, and other criminal elements.”

After protests over rising gas prices spread across the country, Kazakhstan’s President Kassym-Jomart Tokayev requested that the CSTO send in troops to help quell the unrest. Russians comprise the vast majority of the 2,500 CSTO troops deployed in Kazakhstan.

Tokayev said he’s endured an attempted coup, stating that the primary goal of the recent demonstrations was to “undermine the constitutional order and to seize power,” Reuters reported.

Nazarbayev, an authoritarian who ruled over Kazakhstan for roughly three decades, stepped down in 2019 and handpicked Tokayev as his successor. But he retained the title of “leader of the nation” and continued to hold a powerful position as the head of the country’s Security Council. Tokayev removed Nazarbayev from his post last week.

Putin in recent years has taken a series of steps, including military actions, to expand Russia’s influence in countries formerly part of the Soviet Union.

The unrest in Kazakhstan, which has killed dozens and injured thousands, came amid rising tensions between Russia and the West over Moscow’s disposition toward another former Soviet republic — Ukraine.

Tens of thousands of Russian troops have gathered along Ukraine’s borders in recent weeks, prompting fears of an invasion. The US and its allies have effectively threatened to take steps that would aim to cripple Russia’s economy and cut it off from the world if Putin gave the order for a military incursion into Ukraine.

“It’s clear that we’ve offered him two paths forward,” Secretary of State Antony Blinken said regarding Putin on ABC News’s “This Week” on Sunday. “One is through diplomacy and dialogue; the other is through deterrence and massive consequences for Russia if it renews its aggression against Ukraine. And we’re about to test the proposition of which path President Putin wants to take this week.”

“We’ve been working in tremendous collaboration with European partners and allies and beyond to make it very clear that there will be massive consequences for Russia if it renews its aggression, by which I mean economic, financial, and other consequences, as well as NATO almost certainly having to reinforce its positions on its eastern flank near Russia, as well as continuing to provide defensive assistance to Ukraine,” Blinken said.

The top US diplomat said “Russia has a gun to the head of Ukraine.”

Russia, which invaded an annexed Crimea from Ukraine in 2014, has denied any plans for an imminent invasion.

As Putin discussed the situation in Kazakhstan on Monday, US and Russian diplomats held talks on Ukraine in Geneva.

The Kremlin has demanded that the West agree to a number of security guarantees in the region, including never allowing Ukraine or Georgia to join NATO. But the alliance has firmly rejected Russia’s calls for halting the admission of new members.

“We will not compromise on core principles, including the right for every nation to decide its own path, including what kind of security arrangements it wants to be a part of,” NATO Secretary General Jens Stoltenberg said to reporters on Friday.

Stoltenberg said Russia’s capabilities, rhetoric, and track record “sends a message that is a real risk for a new armed conflict in Europe,” underscoring the need for dialogue to thwart such a scenario. But the NATO chief also said the alliance “must also be prepared for the possibility that diplomacy will fail,” emphasizing that the alliance “will always take the necessary steps to protect and defend our nations.” Ukraine is not a NATO member, but it neighbors countries that are part of the alliance and has sought to join for years.

Putin has blamed the West over the tensions regarding Ukraine, but top experts say the contentious dynamic is a direct product of his aggressive actions in the region — including annexing Crimea and backing separatists in a war against Ukrainian forces in the Donbass region.

“As you interpret US-Russia negotiations in Geneva, please remember the context. Putin threatened war to get concessions. This is a hostage situation, not a normal negotiation between earnest equals,” Michael McFaul, the former US ambassador to Russia, tweeted on Sunday.

The Geneva talks on Monday are part of a series of discussions over Ukraine set to occur in Europe this week. NATO members and Russian envoys are scheduled to hold talks in Brussels on Wednesday, and the conversation will continue in Vienna on Thursday at a meeting of the Organization of Security and Cooperation in Europe.