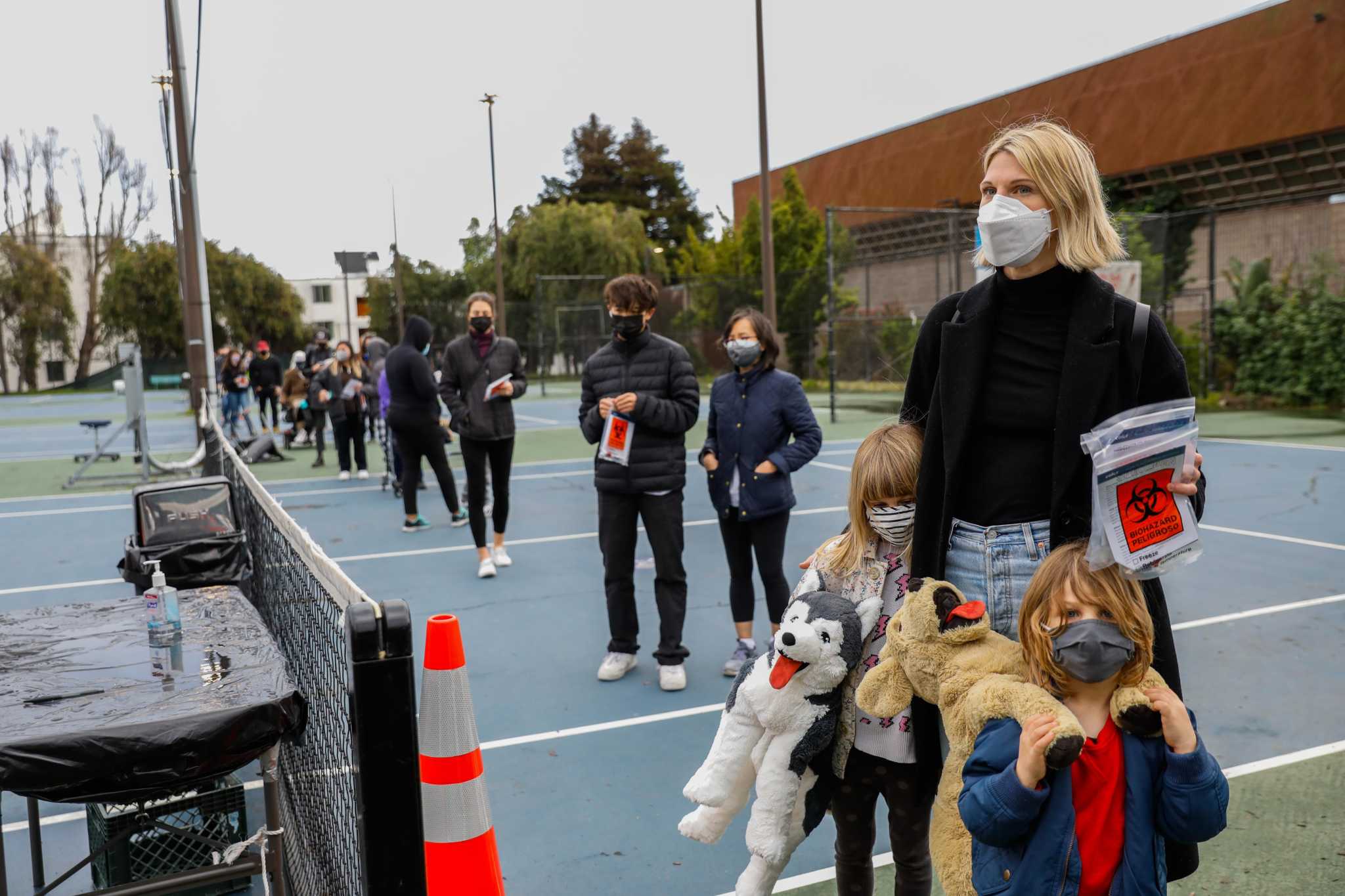 California marked a pandemic high for positive coronavirus test results on Monday with more than 1 out of 5 tests showing COVID-19 infection, as hospitals braced for an even greater influx of new patients.

With Monday’s count, California surpassed 6 million cumulative coronavirus cases reported since the pandemic began. The state’s most recent seven-day average hit a rate of 22% positive results on Jan. 5, according to the most recent state data compiled by The Chronicle. That marks a substantial increase over California’s previous seven-day high of 17.1% recorded during last year’s winter surge and is dramatically up from 5.4% just two weeks ago.

But the state’s actual positive rate may be much higher: Testing sites across California and the Bay Area report staffing shortages and laboratory delays in processing results, due to the surge driven by the highly contagious omicron variant of the virus. Nor does the rate take into account the results of at-home tests, which are increasingly harder to find and are not typically reported to health officials.

The state has reported roughly 100,000 cases each day for the past several days as the omicron surge explodes, Dr. Mark Ghaly, secretary of California Health and Human Services, said during a news briefing Monday.

“COVID once again with omicron is gripping our state, challenging our health systems and impacting communities that have already been hard hit,” Ghaly said. When COVID cases are added to the rest of the hospital population, the state is “knocking on the door” of nearly 52,000 people hospitalized, only about a thousand fewer than last winter’s peak.

Many health care facilities are anticipating surging hospital admissions in the coming weeks as a result of the current infection spike.

State officials project the statewide number of hospital patients with COVID, which stood Monday at 11,048 — up from 3,345 a month ago — could grow to as high as 23,000 to by Feb. 2, a little over three weeks from now, Gov. Gavin Newsom said Monday.

“So it gives you a sense of where we are. It’s manageable, but it’s challenging,” Newsom told a budget briefing where he outlined an influx of spending to fight the pandemic. He added that frontline “nurses and doctors have just been overwhelmed.”

The number of COVID-19 patients in intensive care unit beds statewide reached a total of 1,710.

To keep hospitals operating under the strain, the state Department of Public Health said Saturday that health care workers who test positive for the virus but have no symptoms can remain on the job — at least through Feb. 1.

The new guidance is meant to provide overburdened hospitals with more options for maintaining critical staffing and should not be used to require infected people to return to work, Ghaly said Monday. The guidance is a short-term solution to what could be a very challenging few weeks, he said.

“We’re providing the latitude, the flexibility, to have certain individuals who are asymptomatic and willing to come back to work to help serve patients,” Ghaly said. “Nobody at the state is requiring health care workers to come back who are infected or quarantining.

UCSF Health won’t be taking that step “at this point,” although about 1,158 people — 7% of the workforce — were out due to COVID as of Monday, said spokesperson Elizabeth Fernandez. Asymptomatic COVID-positive workers will not return to the system’s hospitals “without an isolation period and negative COVID test,” she said. Any change will be determined by staffing levels and patient care needs.

At AHMC Seton Medical Center in Daly City, about 60 nurses called in sick last week because they were quarantining — up from the usual 15, said Dr. Robert Perez, who oversees physicians there.

“So many nurses are having to call in sick because they’re testing positive, so we are having a hard time filling their shifts,” Perez said Monday. “The good news is they’re not super sick like the previous episode but nonetheless, if they turn positive you can’t have them on the floor infecting other patients.”

At San Francisco Zuckerberg General Hospital, “We’ve never seen anything quite like this during the surges we’ve had so far,” CEO Dr. Susan Ehrlich said this past weekend. The hospital had about 10% of its staff, or 400 people, out for COVID-19 related reasons.

Hospitals should reject the guidance and maintain stricter precautions such as requiring a negative test before an infected or exposed health care worker returns to work, said SEIU-United Healthcare Workers West.

“Our union will fight for safe working conditions for hospital workers who have continuously put their lives on the line during this pandemic,” said union president Dave Regan.

UCSF infectious disease expert Dr. Peter Chin-Hong compared the state’s new strategy to an understandable “game plan for extreme situations, like in war.” He added, “But the question is how are different organizations going to interpret that? The gray area is where people are nervous.”

Until now, hospital staff testing positive had to isolate for five days and not return until after testing negative. That will not apply under new guidance through Feb. 1. Nor will asymptomatic health workers need to spend time at home quarantined if exposed to someone with COVID.

“This doesn’t reflect a change in the science,” said Dr. Abraar Karan, a Stanford infectious disease expert, tweeted. “It reflects a failure in our policies to stop the epidemic.”

Ascertaining the true extent of increased public infection rates in San Francisco became a bit harder Monday when city health officials temporarily reduced hours at four city-run test sites, due to a slowing of processing results at overloaded labs. That will reduce the city’s capacity by about 250 tests per day out of the current seven-day average of 6,000 tests per day at city-affiliated sites.

Chin-Hong said schools and other institutions may need to double-down on masking, ventilation and other mitigation steps, prioritize “those who are symptomatic and people who are in close contact or those who are infected.”

A surge in 911 calls amid COVID-related staff shortages led San Francisco officials to urge people to call only for “life-threatening emergencies,” not for things like finding a COVID test.

Many experts are holding on to the hope that the COVID pandemic could eventually become endemic, like the flu, once we get through the current surge.