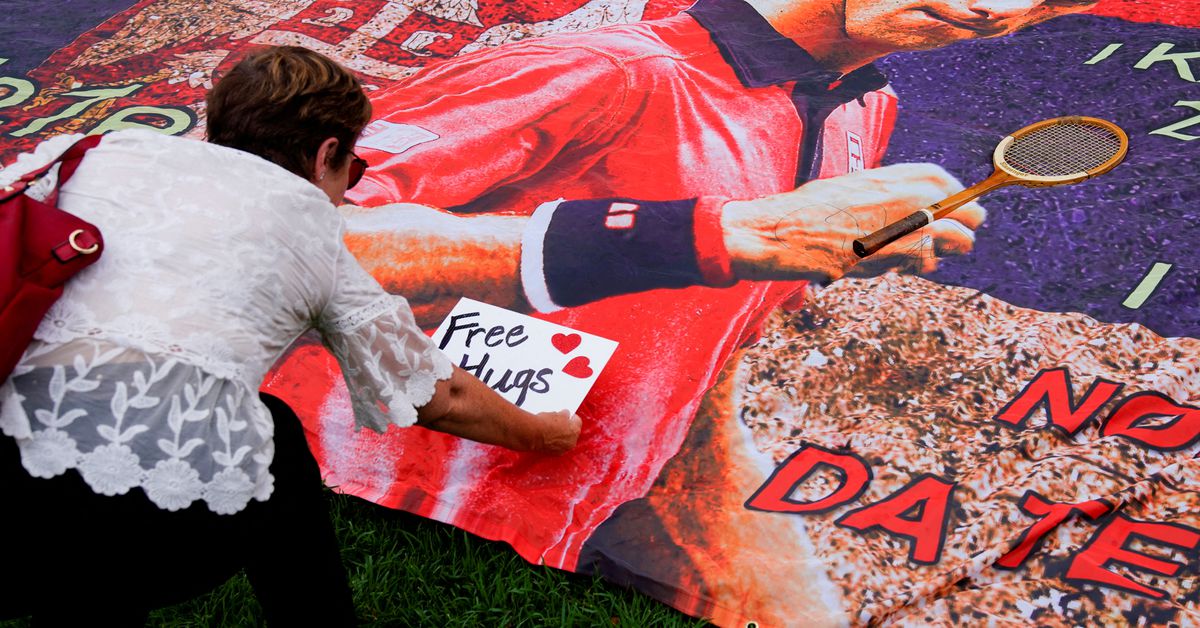 MELBOURNE, Jan 11 (Reuters) – Novak Djokovic swapped one court for another on Tuesday, hitting a few practice shots at Melbourne Park as he warms up for his bid to win a record 21st tennis major at next week’s Australian Open.

A week after he arrived in Australia, Djokovic finally reached centre court thanks to Monday’s court ruling quashing the federal government’s earlier decision to cancel his visa.

However, the world number one still faces the threat of being detained by the federal government for a second time and deported. Immigration Minister Alex Hawke’s office said he was still considering whether to use his discretionary power to cancel Djokovic’s visa.

“In line with due process, Minister Hawke will thoroughly consider the matter,” a spokesman said in an email. “As the issue is ongoing, for legal reasons it is inappropriate to comment further.”

Australia has a policy barring non-citizens or non-residents from entry unless they are fully vaccinated against COVID-19. It allows for medical exemptions, but the government argued that unvaccinated Djokovic did not provide adequate justification for an exemption.

The court ruled Djokovic was treated unfairly by border force officials on his arrival and ordered his visa cancellation be overturned. It did not, however, address whether his exemption – based on Djokovic contracting COVID-19 last month – was valid.

Australian Prime Minister Scott Morrison’s office said he spoke with Serbian Prime Minister Ana Brnabic on Monday and “explained our non-discriminatory border policy.” Serbian media reports said Brnabic emphasised the importance of Djokovic being able to prepare for the tournament. Both said they agreed to stay in contact on the issue.

Djokovic, who expressed his gratitude to the judge and his determination to compete at the first major of the year in a Twitter post late on Monday, did not publicly address the situation on Tuesday.

He was filmed by local media helicopters practicing at Rod Laver Arena, amid unusually tight security at Melbourne Park.

John Alexander, a member of Morrison’s Liberal Party and a former professional tennis player, said a fresh decision to deport Djokovic would “diminish” the status of the Australian Open.

“We had previously been the poor cousin of the four events,” he said. “We’ve got a lot going for us, but we need to treat it carefully.”

The ATP, the governing body of men’s tennis applauded the court ruling, saying the dispute was “damaging on all fronts, including for Novak’s well-being and preparation for the Australian Open.”

A woman places a ‘Free hugs’ sign on a banner of Serbian tennis player Novak Djokovic outside the Park Hotel, where the star athlete is believed to be held while he stays in Australia, in Melbourne, Australia, January 7, 2022. REUTERS/Sandra Sanders

Djokovic was detained by border officials when he landed at Melbourne’s airport late on Wednesday. His visa was cancelled because he failed to provide appropriate evidence to meet the entry requirements to Australia, border officials said.

However, in quashing that decision, Judge Anthony Kelly was critical of the hours-long airport interview and said the player had not been given enough time to contact lawyers and tennis officials to discuss his predicament.

Djokovic had been granted a medical exemption by the Victoria state government based on evidence he contracted COVID-19 last month – the second time he had been infected. The player, who has long opposed mandatory vaccination, confirmed during the interview he was unvaccinated.

Some Australian media reported that Australian Border Force was investigating potential discrepancies in the traveller form submitted by Djokovic and his whereabouts in the days before he arrived in Australia.

In the document submitted to court Djokovic ticked “no” when asked he had been overseas in the 14 days prior. Social media posts, however, appeared to show him in Belgrade on Christmas Day and in Spain on Dec. 31.

The Australian Border Force did not immediately reply to a request for comment. Djokovic’s lawyers at Hall & Wilcox declined to comment.

The Australian Open begins on Jan. 17. Djokovic has won the tournament, one of tennis’ four Grand Slams, for the past three years and nine times in all.

Spain’s Rafa Nadal, who is tied on 20 majors with Djokovic and Switzerland’s Roger Federer, called the fraught build-up to the tournament a “circus” and said the “fairest decision” had been made.

Nick Kyrgios said while he supported vaccination he felt “embarrassed as an Australian athlete, seeing what this guy has done for us and the sport. I just don’t think it’s right how we are handling it.”

However, former American player turned pundit Pam Shriver warned on Twitter the controversy may not be over: “If he plays the booing will be deafening.”

Public opinion in Australia, which is battling an Omicron wave of infections and where more than 90% of the adult population is double vaccinated, has been largely against the player.

Resistance in Melbourne, home of the Open, has been particularly vocal after the city experienced the world’s longest cumulative lockdown.

“We’ve had to go through vaccination protocols and lockdowns for such a long time and he swans in and pretty much does what he likes because he’s the world best tennis player,” Melbourne resident Keith Moore told Reuters.