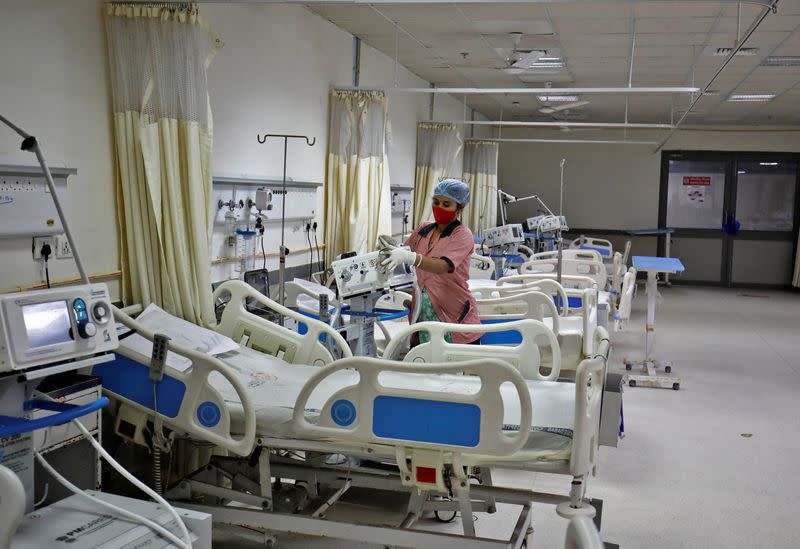 NEW DELHI (Reuters) – Indian states have reserved more than double the COVID-19 hospital beds for children than recommended by federal experts out of fear of being under-prepared, government data shows,

although doctors say not many youngsters have needed critical care yet.

The Health Ministry also said on Monday that only 5% to 10% of all those people infected in India have sought hospitalisation https://www.reuters.com/world/india/indias-covid-19-cases-multiply-vulnerable-groups-given-vaccine-boosters-2022-01-10, compared with 20% to 23% during the last major wave. Authorities say most people have shown no or mild symptoms and have recovered quickly at home.

India reported 179,723 new cases on Monday, taking the total to 35.7 million, the highest in the world after the United States. Deaths rose by 146 to 483,936, only behind the tally of the United States and Brazil.

Data showed that India has more than 24,000 paediatric ICU beds, compared with a recommendation of fewer than 10,000 beds from a federal taskforce. Similarly, there are 64,796 non-ICU beds for children, much higher than the suggested 27,682.

Since the last major infection wave in India starting April, the Jawaharlal Nehru Medical College and Hospital (JLNMCH) in the eastern state of Bihar has kept aside 16 ICU beds for children affected by COVID-19.

“None of the beds has been occupied since the beginning, but we have reserved them in case the third wave affects kids,” Raj Kamal Choudhary, associate professor of medicine at the hospital with some 800 total beds, told Reuters.

“States are scared and prepared because kids below 15 years have not been vaccinated. I support the decision of states to have more beds ready than recommended.”

There is no centralised public data on how many children have needed hospital care due to COVID-19 in India, but countries such as the United States https://www.reuters.com/world/us/covid-19-hospitalization-surge-among-us-children-spurs-new-omicron-concerns-2021-12-30 and Britain have seen a rise in hospitalisation in children due to the fast-spreading Omicron variant.

Basic isolation beds, however, are a plenty at more than 1 million.