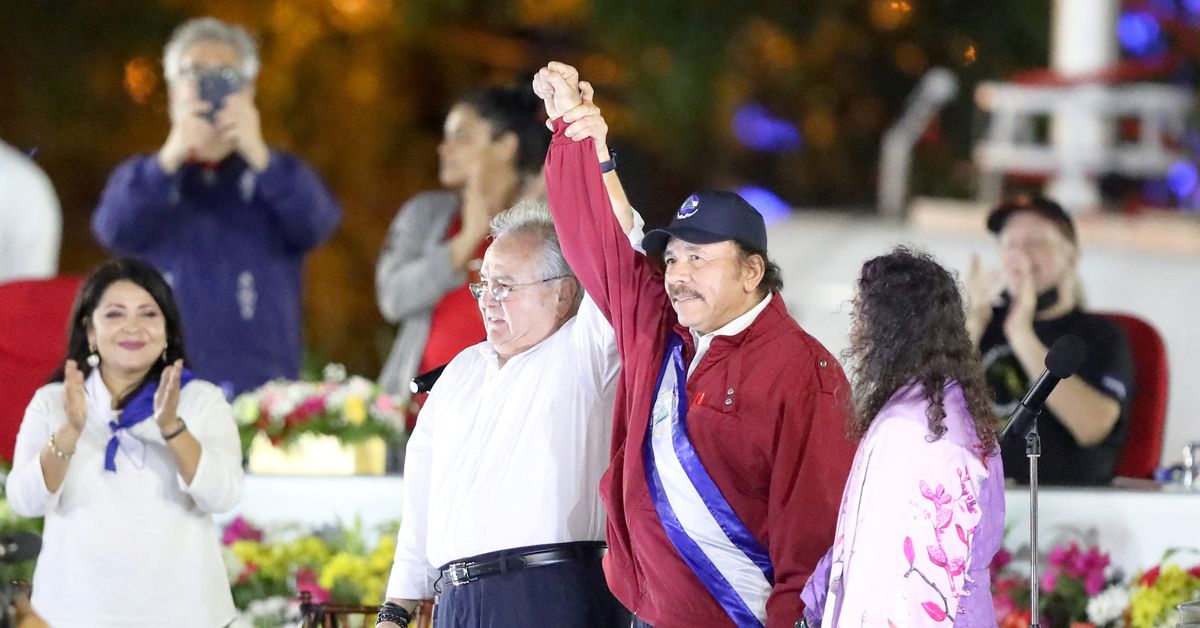 WASHINGTON/BRUSSELS, Jan 10 (Reuters) – Nicaraguan President Daniel Ortega was sworn into office for his fourth consecutive term on Monday, hours after the United States and European Union imposed sanctions on several figures in his government following elections Washington has called a “sham”.

Ortega won the Nov. 7 poll after most of his political foes were jailed, prompting widespread condemnation. U.S. President Joe Biden called the election a “pantomime”, accusing the former Marxist guerrilla and Cold War adversary of the United States of growing authoritarianism.

Most Western and regional nations shunned the inauguration ceremony on Monday evening, though leftist leaders such as Venezuelan President Nicolas Maduro and Cuba’s President Miguel Diaz Canel flew in to show their support.

In a measured speech mostly focused on the history of the Sandinista rebellion against former U.S.-backed dictator Anastasio Somoza, Ortega vowed to keep “growing dreams and building roads” for the Nicaraguan people.

But Ortega’s opponents say the leader now presides over a government akin to that of Somoza, who was toppled by Ortega’s leftist Sandinista guerrillas in 1979.

Laura Chinchilla, the former president of Costa Rica, called Ortega a “dictator” ahead of the ceremony.

“He shows his back to a people who did not vote for him, isolated from the world that does not recognize his election, under a legacy of horror and pain,” Chinchilla said on Twitter.

Ortega’s government, in power since 2007, did not respond to a request for comment.

Earlier in the day, the United States and the European Union imposed sanctions on Nicaraguan officials, including the defense minister.

The sanctions come after a series of other actions Washington has coordinated with allies in recent months to increase pressure on Ortega and his wife, Vice President Rosario Murillo.

Ortega’s first stint in power ended in 1990 and upon returning as president in 2007, he quickly set about gaining control of key state institutions, analysts say.

Election observers from the European Union and the Organization of American States were not allowed to scrutinize November’s poll, and journalists were barred from entering Nicaragua.

U.S. Secretary of State Antony Blinken said the United States and partners would “continue to call out the Ortega-Murillo regime’s ongoing abuses and will deploy diplomatic and economic tools to support the restoration of democracy and respect for human rights in Nicaragua”.

The U.S. Treasury Department said in a separate statement it imposed sanctions on six Nicaraguan officials over accusations of state acts of violence, disinformation and targeting of independent media.

The Treasury action targeted the minister of defense as well as officials of the military, the company overseeing telecommunications and postal services, and the state-owned Nicaraguan Mining Company.

The U.S. State Department is also taking steps to impose visa restrictions on 116 people it accused of undermining democracy in Nicaragua, Blinken said, barring some mayors, prosecutors and police, prison and military officials, among others, from entering the United States.

Responding to the moves against him, Ortega said in his speech the United States and the European Union did not have the moral authority to impose sanctions.