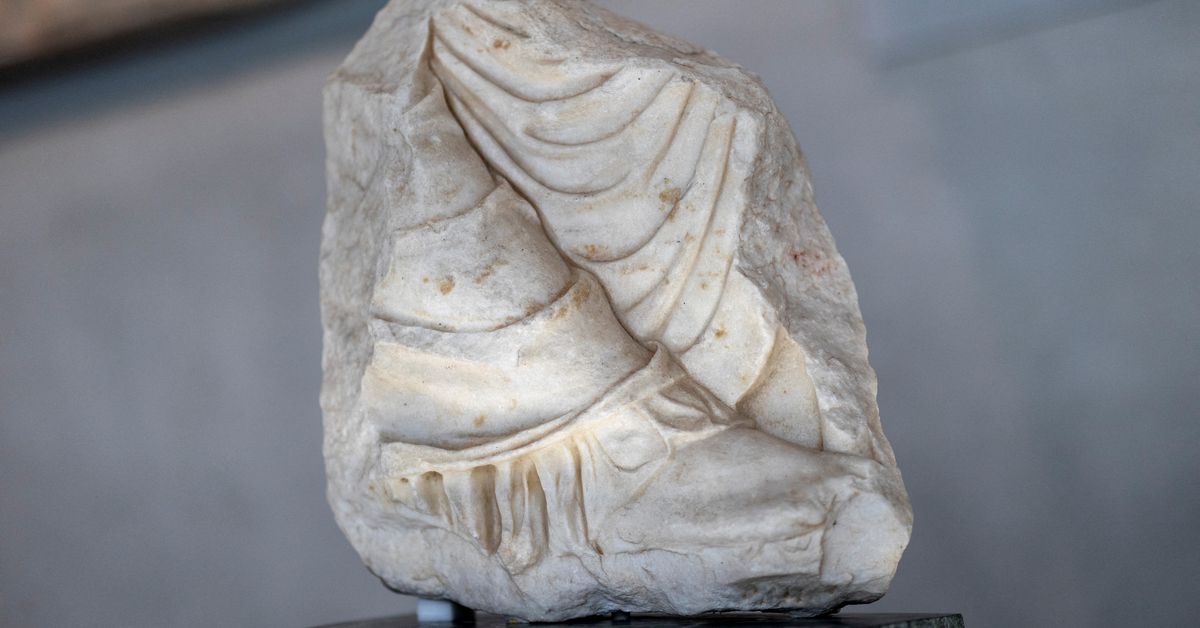 ATHENS, Jan 10 (Reuters) – A marble fragment of the Parthenon temple has been returned to Athens from a museum in Sicily, a move officials hope will advance efforts to have the British Museum send back ancient sculptures from Greece’s most renowned ancient landmark.

“It is marvellous that Sicilian and Italian friends thought to bring it back where it was born,” Acropolis Museum Director Nikolaos Stampolidis said of the fragment, once part of the temple’s eastern frieze.

It is to be placed in the Parthenon Gallery – a glass-walled chamber with a view of the Parthenon that displays sculptures of the temple’s 160-metre-(520-foot)-long frieze in the same position as they were on the original monument, with plaster copies replacing pieces that are now mainly in the British Museum.

“We hope that this first step taken by Sicily can encourage a similar decision in other countries,” said Antonio Salinas Museum Director Caterina Greco.

Part of Sicily’s cultural heritage agreement, which provides for transfers and exchanges of artefacts between museums, the Parthenon fragment will be loaned to Athens for four years with a renewal option for another four, but talks are underway between governments for the piece to remain permanently.

In return, the Acropolis Museum will loan Palermo a 5th century BC headless statue of the goddess Athena and an 8th century BC amphora from the Geometric period for four years.

The “Fagan fragment” is a part of a larger sculpture in the Acropolis Museum that is mostly a plaster copy, whose original pieces are in the British Museum.

The fragment was once part of the collection of the 19th century British consul general to Sicily, Robert Fagan, a diplomat and archaeologist, before it was purchased by the Royal University of Palermo in 1820 from his widow after his death. It is not clear how Fagan first acquired it.

A fragment of the Parthenon temple, on loan from the Antonino Salinas Regional Archaeological Museum of Palermo, is displayed at the Parthenon Gallery of the Acropolis Museum in Athens, Greece, January 10, 2022. REUTERS/Alkis Konstantinidis

The “Fagan fragment” is the first piece of the sculptures of the Parthenon – Greece’s most renowned 5th century BC monument – to return to Greece from a foreign museum.

Athens has campaigned to have the “Elgin Marbles”, as they are often known – 75 metres of Parthenon frieze, 15 metopes and 17 sculptures – returned from the British Museum since they were removed by British diplomat Lord Elgin in the early 19th century when he was ambassador to the Ottoman Empire then ruling Greece.

The British Museum bought the marbles in 1816 and British officials say they had been acquired legally by Elgin, a claim Greece denies. The British Museum says there are no current discussions with the Greek government on their return.

“They are essentially providing the road map on how the permanent return of the Parthenon marbles to Athens could be organised,” said Greek Culture Minister Lina Mendoni, referring to the loan by Italy.

Greek Prime Minister Kyriakos Mitsotakis has offered to loan significant artefacts to Britain in return for the marbles, after decades of rejected appeals.

“(This) paves the way for the British Museum to enter into serious discussions with the Greek authorities in order to find a solution that would be mutually acceptable,” Mitsotakis said during the presentation.

When Mitsotakis visited Downing Street in November, British Prime Minister Boris Johnson told him that the issue was one for the British Museum and not for his government.

“I did raise the issue when I visited,” Mitsotakis said on Monday. “I felt encouraged by (Johnson’s) statement…that the British government would not oppose a possible agreement that could be reached between (Greece) and the British Museum.”

In March last year Johnson told a Greek newspaper that Britain was the legal owner of the marbles.

Recently European countries such as France, Spain and Germany have stepped up to return looted artefacts in their museums back to their African countries of origin.

“When there is a will, there is a way. Sooner or later this will happen,” Mitsotakis said of the marbles returning from Britain.

Reporting and writing by Deborah Kyvrikosaios; Editing by Mark Heinrich