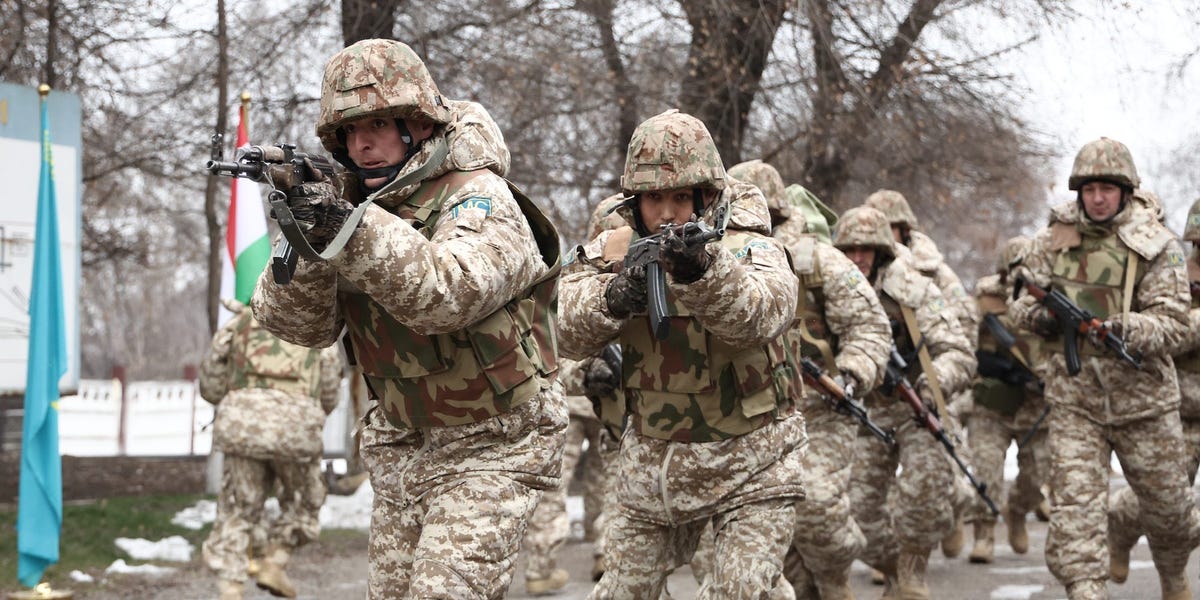 Some 2,500 troops with the Collective Security Treaty Organisation, a Russia-led alliance including Kyrgyzstan and Tajikistan, arrived in Kazakhstan on January 6 to help quell violence that was sweeping its cities.

Kazakhstan called for aid on January 2 after the spread of protests that began in the fuel-producing western province of Mangistau. The largest demonstrations, and most violence, were in Almaty, the country’s largest city.

After helping quash the protests, the CTSO troops are due to depart over a period of 10 days starting on January 13, President Kassym-Jomart Tokayev told his parliament Tuesday.

“The main mission of the CSTO peacekeeping forces has been successfully completed,” Tokayev said.

During the unrest, demonstrators protesting the government’s decision to remove a price cap on liquefied petroleum gas stormed government offices, set fire to state property, and clashed with police.

The government  cut access to the internet and declared a state of emergency. As of Monday, at least 164 people had been killed and 8,000 more detained, according to Kazakh authorities.

On Monday, Tokayev claimed that the uprising was an attempted coup rather than a spontaneous expression of anger. He praised Russia, a close ally, for leaping to Kazakhstan’s defense.

The same day, Putin said Kazakhstan was targeted by terrorists and external forces, without giving any names or specifics, Reuters said.

Such unsubstantiated claims are common among nations justifying the use of force in protests. Under CSTO rules, members can only deploy troops to other member states to respond to external — not internal — threats, per Radio Free Europe.

Russia is currently keeping juggling unrest on two fronts: Kazakhstan at its southern border and rising tensions with Ukraine and the US at its western border.

Russia has for weeks been building up a large troop presence at the Ukrainian border, a move Putin says is in response to NATO expansion eastward and the presence of US artillery in Ukraine.

In an attempt to deescalate tensions, US and Russian diplomats met for emergency talks in Geneva, Switzerland, on Monday.

During the eight-hour meeting, Russian officials said Moscow had no intention of invading Ukraine. The US said that it would not deny Ukraine, or any other eastern bloc country, entry to NATO just because Russia felt threatened.

President Joe Biden said earlier this month that the US will defend Ukraine’s sovereignty and would respond “decisively” if Russia invades.