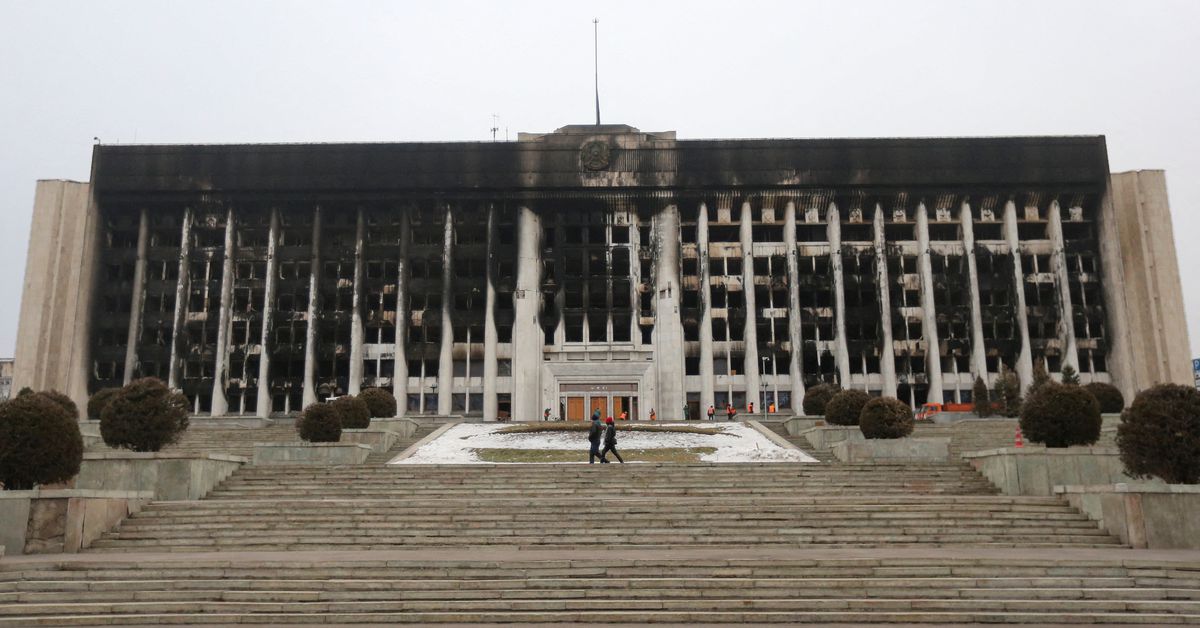 NUR-SULTAN, Jan 11 (Reuters) – Russian-led forces will begin withdrawing from Kazakhstan in two days’ time after stabilising the Central Asian nation following serious unrest, the president said on Tuesday, in a speech that took aim at wealthy associates of his predecessor.

In a video call with parliament after putting down what he has called an attempted coup, Kazakh President Kassym-Jomart Tokayev appointed a new government headed by career public servant Alikhan Smailov.

In what looked like his latest attempt to distance himself from his predecessor, Tokayev said that public discontent over income inequality was justified and that he wanted associates of Nursultan Nazarbayev, the ex-president, to share their wealth.

Many Central Asia analysts believe intra-clan infighting among the elite may have played a major role in what was the deadliest violence in the ex-Soviet republic’s 30 years of independence from Moscow.

As protesters torched buildings in the biggest city Almaty last week, Tokayev said former leader Nazarbayev was leaving his post as head of the powerful Security Council – where he had continued to pull the strings despite handing over the presidency in 2019.

Nazarbayev, 81, who ran the country for almost three decades and backed Tokayev as his successor, has not made a public appearance since.

Thanks to Nazarbayev, “a group of very profitable companies emerged in the country as well as a group of people wealthy even by international standards,” Tokayev told parliament.

“I think it is time they pay their dues to the people of Kazakhstan and help them on a systemic and regular basis.”

He gave no names, but the list of Kazakhstan’s richest people includes several members of Nazarbayev’s extended family, including his daughter Dinara with her husband, and a father-in-law of the ex-president’s late grandson. read more

Tokayev said the financial system was dominated by large business groups “based on the principle ‘everything for friends, and laws for everyone else'”.

He spoke of initiatives to narrow the wealth gap, raise taxes on the mining sector, and eliminate irregularities in state procurement and areas where associates of Nazarbayev have business interests. read more

Tokayev also rounded on security officials, accusing them of abandoning their posts and letting protesters capture weapons and sensitive documents.

He has blamed the violence on foreign-trained Islamist radicals and “terrorists”.

He said on Tuesday that the National Security Committee, the Kazakh successor to the Soviet KGB, had not only missed the looming threat, but had failed to act properly during the unrest. In some cities its officials had abandoned buildings and left behind firearms and classified documents, he said.

A view shows the city administration headquarters, which was set on fire during recent protests triggered by fuel price increase, in Almaty, Kazakhstan January 11, 2022. REUTERS/Pavel Mikheyev

The fact that Russian-led forces that Tokayev called in to help stabilise the situation were first deployed to the capital, Nur-Sultan, prompted speculation at the time that their mission was to protect the government and Tokayev himself at a time when he could not fully trust his own security forces.

Tokayev sacked Karim Masimov, then head of the National Security Committee (NSC), on Jan.5. Masimov was then detained on suspicion of treason.

Tokayev, 68, last week asked the Moscow-led Collective Security Treaty Organisation (CSTO) to send in troops at the peak of what he later said was an attempted coup d’etat whose unnamed instigators had plunged half of the oil-rich nation’s territory into violence.

A day earlier, he said that the CSTO mission, whose legitimacy and duration were queried by Washington, prompting an angry response from Moscow, numbered 2,030 troops and 250 pieces of military hardware.

On Tuesday he said the CSTO’s main mission had been successfully completed. It would start a phased withdrawal in two days and pull out altogether within 10.

Russian President Vladimir Putin has claimed victory in defending Kazakhstan from what he described as a foreign-backed terrorist uprising. read more

Kazakh authorities say order has been largely restored in the nation of 19 million and that almost 10,000 people have been detained over the unrest, with a hunt for others ongoing.

“Right now in the country there is a quiet terror. Everyone is frightened,” said Botagoz Issayeva, a Kazakh rights activist in Sweden who is in contact with civil society groups inside the country.

She said among those arrested were about 50 activists taken from their homes and not heard of since.

“We don’t even know where they’ve been taken and what state they’re in,” said Issayeva, who represents a civil society coalition that has lobbied the European Parliament and U.S. Congress to crack down on corruption in the country.

She said the reported death toll of 164 appeared too low, especially since Tokayev announced last week he had given shoot-to-kill orders against what he called bandits and terrorists.

The authorities say that initially peaceful protests against car fuel price increases were hijacked by groups aiming to overthrow the government.

The Organisation of Turkic States and Hungary on Tuesday condemned “violence and vandalism” in Kazakhstan, voicing support for Kazakh government operations against “terrorists, radicals, extremists and criminals”.

Reporting by Tamara Vaal in Nur-Sultan; Additional reporting by Tuvan Gumrukcu in Ankara, Anita Komuves and Krisztina Than in Budapest, and Mark Trevelyan in London; Writing by Olzhas Auyezov/Andrew Osborn; Editing by Andrew Cawthorne