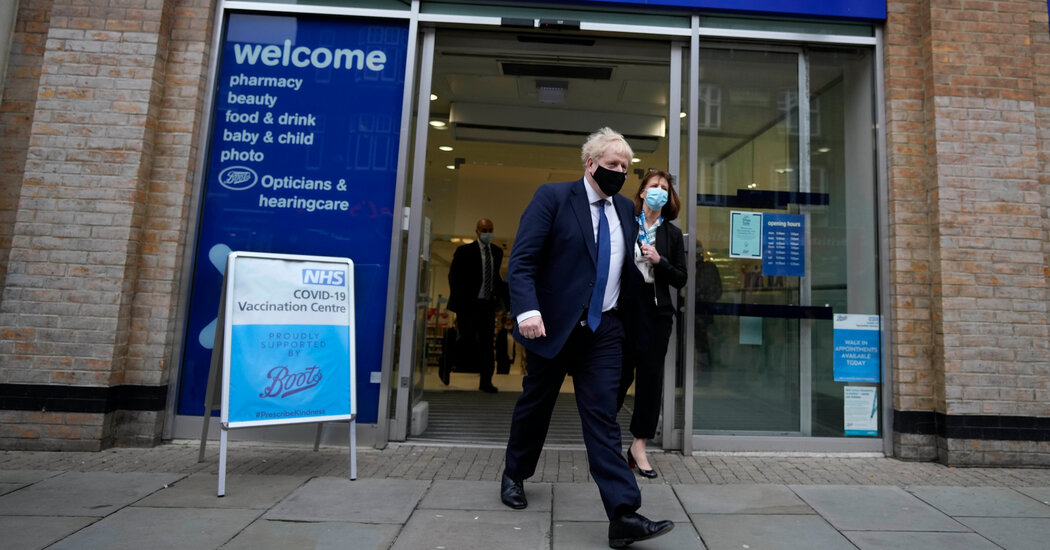 LONDON — If Prime Minister Boris Johnson of Britain had hoped to put a perilous stretch of political and ethical blunders behind him this year, his hopes were dashed Tuesday by a fresh kerfuffle: a BYOB garden party at 10 Downing Street that violated his own government’s pandemic lockdown rules.

The British news media reported that as many as 100 staff members were invited to a “bring your own booze” party in the backyard of Mr. Johnson’s residence in May 2020, a time when officials were instructing people not to socialize with more than a single person outside their families, to curb the spread of the coronavirus.

Mr. Johnson has not denied that he and his wife Carrie attended the gathering, which drew about 30 guests. If true, that would belie his claim in Parliament last year that he was told there were no Downing Street parties that breached social-distancing rules. The Metropolitan Police have indicated they may investigate.

It is the latest, potentially most dangerous, disclosure yet for Mr. Johnson, reviving doubts about his truthfulness, and fueling accusations that he and his top aides do not live by the rules they impose on the public. The ceaseless turmoil has stoked speculation that he could face an internal leadership challenge this year.

“He can run but he can’t hide,” the deputy leader of the opposition Labour Party, Angela Rayner, declared on Tuesday in Parliament, where the prime minister dispatched a lower-level official in his place to take questions about the party. “The public have already drawn their own conclusions.”

Mr. Johnson and his Conservative Party have swooned in the polls amid almost weekly reports of illicit, after-work festivities at Downing Street. The allegations, analysts say, have cut through the typical scandal-of-the-moment furor that normally fades with the next day’s headlines, resonating with a British populace that still vividly remembers the pandemic sacrifices it was asked to make.

For a master escape artist like Mr. Johnson, this crisis shows all the signs of sticking around. Beyond the merrymaking, he is also facing scandals involving the costly interior decoration of his Downing Street apartment and his ill-fated defense of an ethically challenged Conservative lawmaker.

Analysts concluded he had bought himself some breathing space until local elections in May, which will be a big test of how much the contretemps over the parties and other ethical issues has damaged electoral support for the Tories.

Now, though, the parties are likely to remain front and center for at least a few weeks, and perhaps longer, if the police open an investigation. Mr. Johnson’s government also faces economic pressure because of inflation and tax increases, which are driving up the cost of living for millions of Britons.

“That’s going to dominate government business and politics this year, much more than Covid,” said Mujtaba Rahman, an analyst at the political risk consultancy Eurasia Group. “So, Johnson is very much swimming against the tide. Things look very bad for him, but’s he not done for yet.”

The latest scandal, the disclosure of the party on May 20, 2020, came in a blog post by Mr. Johnson’s former chief adviser, Dominic Cummings, who has waged a one-man campaign to discredit the prime minister since he was fired by him late that year. Mr. Cummings said he did not attend the gathering — though he did embarrass the government with his own violation of lockdown rules — and raised questions about the wisdom of holding it, as did another senior adviser in the prime minister’s office.

The British broadcaster ITV published what it said was an email invitation to the party from Mr. Johnson’s principal private secretary, Martin Reynolds. In it, he said, “we thought it would be nice to make the most of the lovely weather and have some socially distanced drinks in the No 10 garden this evening.”

The BBC reported that two witnesses said they saw the prime minister, who had recently endured a life-threatening case of Covid, and his wife at the party. It happened on a day when Britain reported 363 deaths from Covid and a government minister, Oliver Dowden, told the public, “You can meet one person outside of your household in an outdoor public place.”

The allegations are being investigated by Sue Gray, a senior civil servant, who replaced the cabinet secretary, Simon Case, after he was forced to step aside following claims that he had breached the rules himself. Even before Ms. Gray wraps up her report, opinion polls indicate that the disclosures about the parties have drained support for the Tories, and for Mr. Johnson in particular.

“Hardly anybody believes what Boris Johnson has to say on the matter,” Chris Curtis, head of political polling at Opinium Research, wrote on Twitter. “In fact, more people think the moon landings were faked than think the prime minister is telling the truth.”

Mr. Johnson has proved to be an uncannily resilient politician. Many voters, analysts said, have long since discounted what they view as his glancing relationship to the truth. The problem is that the scandal could derail his efforts to reset his government and soothe the restive backbenchers in his party.

It’s not for lack of trying. On Monday, the government unveiled a policy to overhaul its approach to building safety issues. Later this month, one of Mr. Johnson’s allies, Michael Gove, plans to flesh out the government’s flagship project to spread prosperity to areas in the middle and north of England that feel neglected.

“Between now and the spring is really his only opportunity to reboot his message and his premiership ahead of a large number of local elections,” said Matthew Goodwin, a professor of politics at the University of Kent.

Instead of keeping the spotlight on those issues, Mr. Johnson faces questions about not only whether he broke lockdown rules but also misled Parliament in denying it. On Dec. 8, he said, “I have been repeatedly assured since these allegations emerged that there was no party and no Covid rules were broken.”

If the Labour Party cements its polling lead, pressure is likely to grow among Mr. Johnson’s backbenchers for a no-confidence vote, which could force him from power. Removing a sitting prime minister is difficult, particularly one like Mr. Johnson, who rolled up an 80-seat majority little more than two years ago.

Yet few issues can alienate the public like the double standard of politicians partying while telling others to hunker down at home.

“If the prime minister was at this party, then his position would be untenable,” said Lobby Akinnola, a spokesman for Covid-19 Bereaved Families for Justice, a group that represents families who have lost relatives in the pandemic, in a statement. “He’d have lost all moral authority to lead the country, after breaking his own rules that the rest of us followed, often at great sacrifice.”