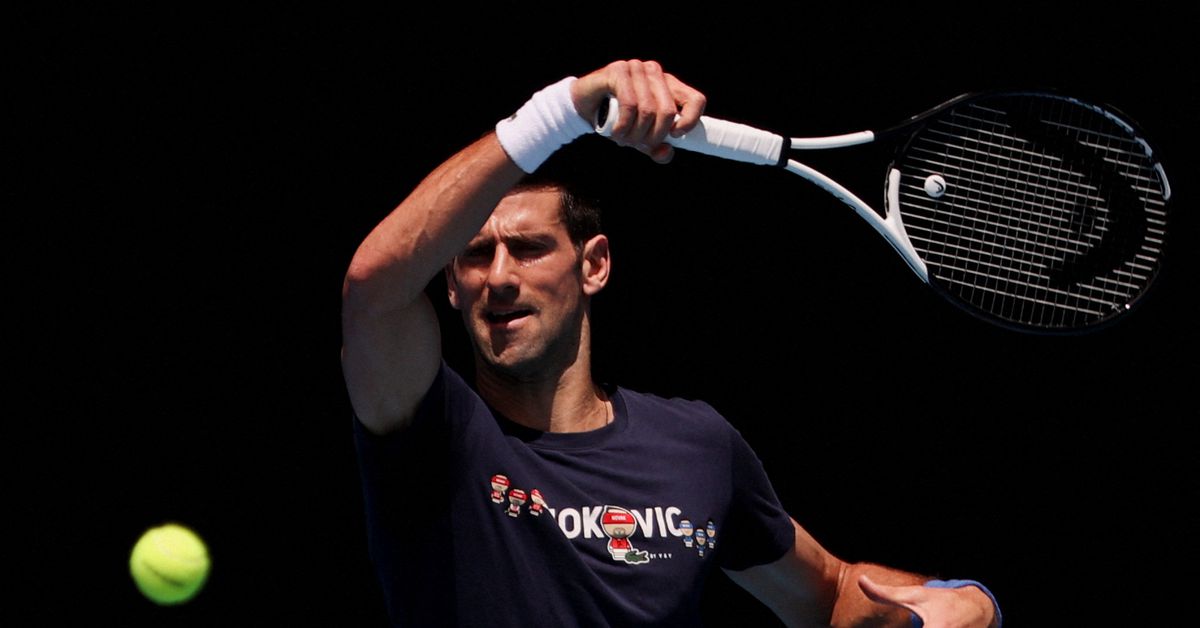 MELBOURNE, Jan 12 (Reuters) – Novak Djokovic said “human error” was behind a mistake on his documents for entry to Australia that breached its strict laws on reporting recent travel, as the government weighed whether to deport the player.

Djokovic was held in immigration detention in Melbourne for several days after his visa was cancelled by border force officials, who questioned his medical exemption for a requirement to be vaccinated for COVID-19.

He was released on Monday when a judge quashed that decision, saying the cancellation of the visa was “unreasonable” because the player was not been given time to consult lawyers and tennis officials when he arrived in the country.

On Wednesday, Djokovic said his travel declaration was filled in by his support team, who made an “administrative mistake” when they ticked the “no” box in response to whether he had travelled elsewhere in the 14 days before arriving in Australia.

“This was human error and certainly not deliberate,” Djokovic said in a post on Instagram. “We are living in challenging times in a global pandemic and sometimes these mistakes can occur.” read more

The statement came as Australia’s immigration minister, Alex Hawke, considered whether to cancel the world number one tennis player’s visa ahead of the Australian Open, which starts on Jan. 17.

Giving false or misleading information on the form is an offence, carrying a maximum penalty of 12 months in prison, and a fine of up to A$6,600 ($4,730) and can lead to cancellation of the offender’s visa.

Djokovic, who is seeking to win a record 21st tennis major at the Open, said his lawyers had provided additional information to the Australian government on Wednesday.

A spokesman for Hawke, who has the discretionary power to again cancel Djokovic’s visa, said the consideration process would be extended to assess the new information.

Australia has a policy barring non-citizens or non-residents from entry unless they are fully vaccinated against COVID-19 but offers a medical exemption. Djokovic’s visa was cancelled on the grounds he has not been vaccinated and his medical exemption was not satisfactory.

Monday’s court ruling did not address whether that exemption – based on Djokovic contracting COVID-19 last month – was valid.

The Women’s Tennis Association (WTA) raised concerns about doubles specialist Renata Voracova, who left Australia on Friday after her visa was cancelled, saying the Czech player followed the rules and had done nothing wrong.

Voracova, who also had a COVID-19 exemption and was detained after Djokovic’s arrival, had been in Australia for several days and taken part in a warm-up event.

“We will continue to work with authorities on addressing this unfortunate situation in an appropriate manner,” the WTA said in a statement.

Questions arose about Djokovic’s movements before coming to Australia when social media posts appeared to show him in Belgrade less than two weeks before he headed to Spain and then on to Australia.

Accounts from two witnesses and another individual obtained by Reuters corroborated those social media posts.

Djokovic, who held another practice session at Melbourne Park on Wednesday, did not detail his travel in his statement on Wednesday acknowledging the mistake.

The player also apologised in his statement for attending a L’Equipe interview and photoshoot on Dec. 18, the day after he said he learned he had tested positive for COVID-19 – for the second time.

“While I went home after the interview to isolate for the required period, on reflection, this was an error of judgement and I accept that I should have rescheduled this commitment,” he said.

Djokovic denied media reports he also knew he had contracted the virus when he attended a tennis event in Belgrade to present awards to children a day earlier.

“I was asymptomatic and felt good, and I had not received the notification of a positive PCR result until after that event,” he said, adding that a rapid antigen test taken before the event came back negative.

Social media posts showed Djokovic posing with the children, without wearing a mask.

In an affidavit to an Australian court that has been made public, Djokovic said he was tested and diagnosed with COVID-19 on Dec. 16, the day before he met the children. It did not say when he had received the diagnosis.

While supporters of the Serbian star say he is being made a scapegoat by the Australian authorities, Djokovic is expected to face a tough crowd at the Open. read more

Public opinion in Australia, which is battling an Omicron wave of infections and where more than 90% of the adult population is double vaccinated, has been largely against the player. read more