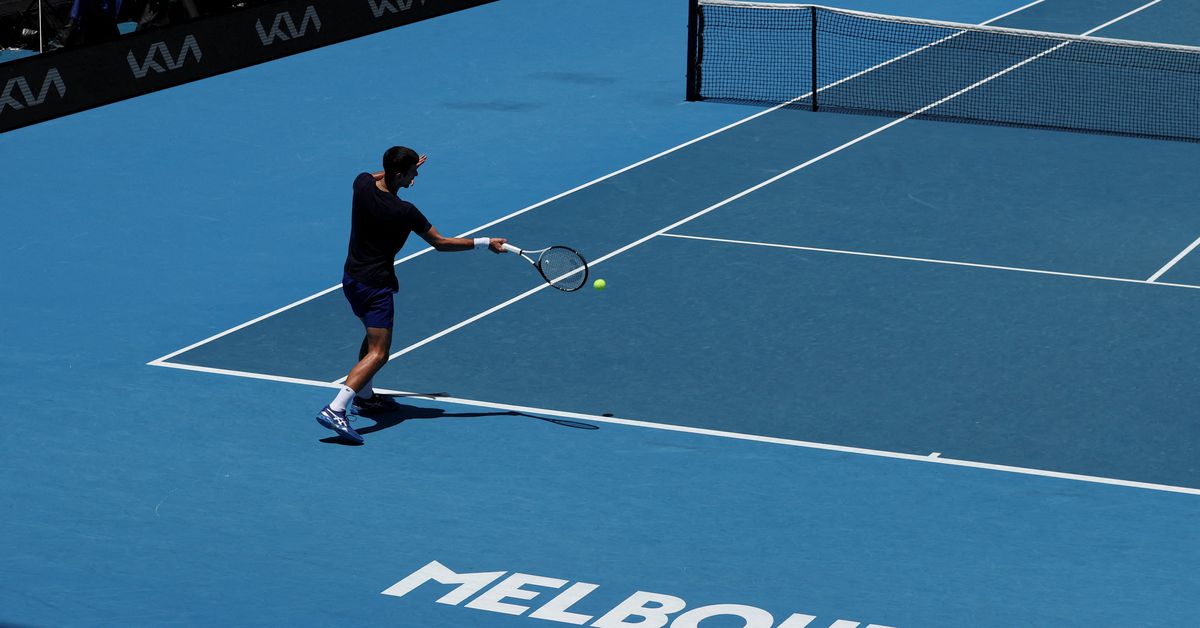 Serbian tennis player Novak Djokovic practices at Melbourne Park as questions remain over the legal battle regarding his visa to play in the Australian Open in Melbourne, Australia, January 12, 2022. REUTERS/Loren Elliott

MELBOURNE, Jan 12 (Reuters) – Novak Djokovic is likely to face hostility both on and off court if he is allowed to play at the Australian Open but a former member of the Serbian’s team thinks the world number one is well-equipped to deal with it.

While Australia’s immigration minister continues to consider whether to cancel Djokovic’s visa on Wednesday, the 20-times Grand Slam champion has been pressing ahead with his preparations for his title defence. read more

Djokovic’s announcement last week that he had a medical exemption to play despite being unvaccinated was met with uproar in Australia, which is battling an Omicron wave of infections and where more than 90% of the adult population is double vaccinated.

Craig O’Shannessy, who worked as a strategy and tactical analyst for Djokovic, thinks that fury will almost certainly be vocalised by the crowds at Melbourne Park.

“It is not going to be new to him,” he told Reuters. “But even though he has the mental experience and toughness, this has the potential to be at a level, maybe, that we have not seen in tennis.”

The dressing room might not be the most welcoming place for Djokovic either, with some players resentful that he is not vaccinated.

The ATP says 97 of the top 100 men are vaccinated and American world number 93 Tennys Sandgren has skipped the Australian Open, which starts on Jan. 17, because of the double-dose mandate.

World number 140 Joao Sousa, who is trying to qualify for the main draw this week, said it was difficult for other players to accept that Djokovic could play without being vaccinated.

“I can be empathetic with what he is going through in Australia, but it is a bit selfish from him to arrive here as the only player unvaccinated,” he told Portuguese news site Bolamarela.

“It is tough for us players to accept that. Many players … didn’t want to get vaccinated and were forced to do it to be able to play tournaments.

“He is finding a way around those rules.”

“(The) rules were outlined months ago, namely that everyone should vaccinate themselves, and Djokovic didn’t,” he told Hungarian media from Melbourne.

“From this point of view, I don’t think he would have the right to be here.”

O’Shannessy, however, says Djokovic has developed techniques for dealing with hostility as he has vied for tennis supremacy with crowd favourites Roger Federer and Rafa Nadal over the years.

“There is no person on the planet who has been subjected to being booed on the tennis court more than him,” the Australian, who now works with compatriot Alex Popyrin, added.

“He has talked about in the past, that when the crowd is chanting ‘Roger’, in his mind he changes the word ‘Roger’ to ‘Novak’ and thrives on it.”

Quite apart from the distraction of the legal issues, Djokovic also faces the prospect of curtailed preparations for the rigours of five-set tennis after five days in detention.

On Wednesday, the Serbian practiced on Rod Laver Arena for a second time and O’Shannessy said the 20-times major winner would slowly build the intensity of his sessions.

“He needs to take a couple of days to build back his consistency, shot tolerance, timing and movement,” he said.

“(He will) tick all those boxes first with light hitting, then start ramping up the power and footwork with practice sets to build a strong base towards being raring to go in the first round.”

This will be the first time Djokovic has kicked off his season in the Australian Open main draw without taking part in any kind of warm-up event, be it an ATP tournament, exhibition or team competition.

O’Shannessy doubted that would be a big factor given the 34-year-old just missed out on a Grand Slam last season — winning three of the sport’s major titles and losing in the final of the other.

“It would matter if he was out of form, but he is not out of form. He almost won the Grand Slam last year,” he said.

“Even though he didn’t win the Grand Slam, it was still one of the greatest years we have ever seen. That success he enjoyed in 2021 is very relevant in his mind. He is still feeding off that in 2022.”

Australian player Nick Kyrgios, who has emerged as an unlikely ally for his one-time antagonist over the last week, was also of the view that Djokovic would be as strong as ever, if allowed to play.

“He’s going to be very determined to play well, and stick it to everyone,” said the Melbourne Park favourite.

“I think he’ll have no problem preparing. I think this is just all added fuel for him, in my opinion.

“You don’t become a great champion like that without being able to overcome some adversity like this.”