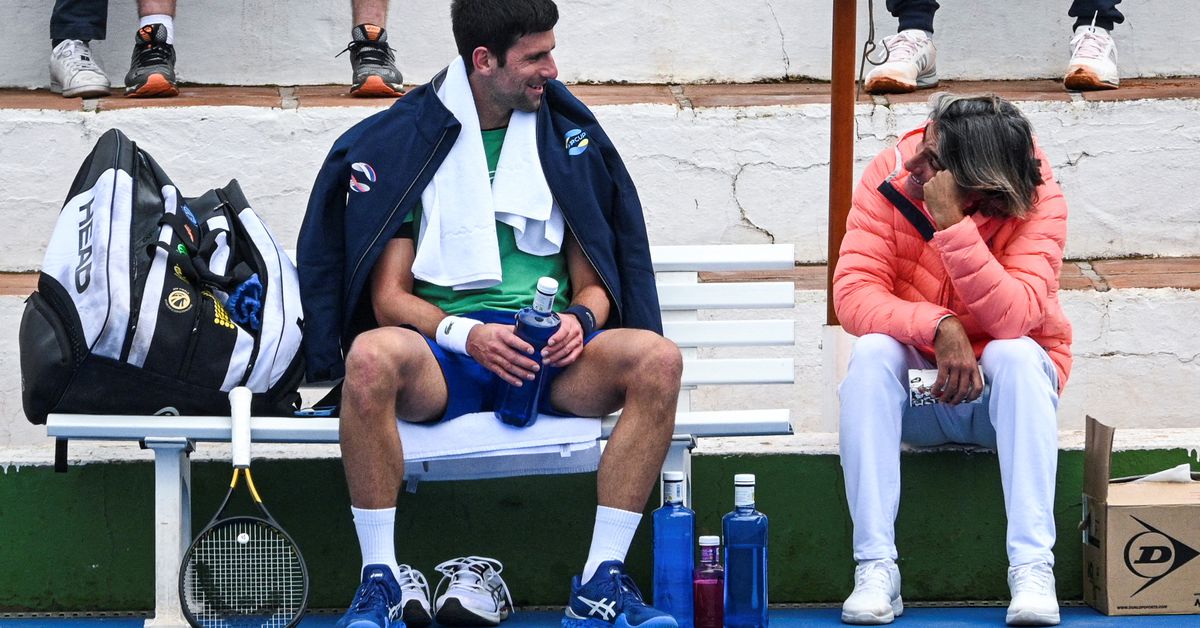 BELGRADE, Jan 12 (Reuters) – Novak Djokovic was in Serbia in the two weeks before flying to the Australian Open from Spain, according to three Belgrade residents, whose accounts to Reuters backed social media posts that contradict information contained in his immigration declaration on arrival in Melbourne.

The accounts from two eyewitnesses and another individual, obtained by Reuters on Tuesday and previously unreported, corroborated earlier social media posts that appear to show Djokovic in Belgrade less than two weeks before he headed to Spain and then on to Australia.

These accounts of his travel history are at odds with a declaration submitted as part of immigration formalities for Djokovic’s entry to Australia that stated he had not travelled in the 14 days prior to leaving for Australia.

Giving false or misleading information in the form is an offence, carrying a maximum penalty of 12 months in prison, and a fine of up to 6,600 Australian dollars (US$4,730) and can lead to cancellation of the offender’s visa.

Djokovic, the world number one in men’s tennis, is in Australia to play in next week’s Australian Open. The federal government cancelled his visa when he landed, on the grounds he has not had a COVID-19 vaccination and his medical exemption was not satisfactory.

A judge on Monday quashed that decision after Djokovic made a successful legal challenge. But the Australian government said it was considering whether to use discretionary powers to cancel Djokovic’s visa.

Two representatives for Djokovic, and his Australian lawyers, did not respond to emailed requests for comment on his movements in the 14 days before Jan. 5, and about the information given in the immigration form.

Djokovic’s father, Srdjan Djokovic, responding to Reuters questions, sent a statement which said: “If anything had not been cleared up as some journalists stipulate, the verdict would have been different.”

Three separate social media posts have purported to show Djokovic photos and video of Djokovic in Belgrade and were posted on Dec. 25. It has not been possible to independently verify when and where the images were recorded.

However, two eyewitnesses who spoke to Reuters said they saw the athlete in Belgrade on or after Dec. 24, that is within the 14-day window before his arrival in Australia, via Spain. The two witnesses said they could not recall the exact dates they saw the tennis player. A third person confirmed that video of Djokovic posted on social media was recorded on Dec. 25 in Belgrade.

Before boarding his Emirates flight to Melbourne, Djokovic – like all travellers to Australia – was required to fill out a form called an Australia Travel Declaration.

Among the questions on that form, Djokovic or his representatives had checked a box stating that he had not, or would not, travel in the 14 days prior to his flight to Australia, according to a copy of the completed form submitted to the Australian federal court by his lawyers as part of his legal challenge.

Djokovic told Australian authorities that when he arrived in Australia on Jan. 5, he had travelled there from Spain, according to documents his lawyers submitted to the court and seen by Reuters.

In order to have not travelled in the 14 days prior to his flight to Australia, Djokovic needed to have been in Spain from Dec. 23 at the latest.

Asked to comment on whether it was investigating if Djokovic’s form contained misleading information, the Australian Border Force said it did not comment on operational matters.

It said that as part of Australia’s response to the COVID-19 Omicron variant, it is an enforceable requirement that travellers, among other things, “make a declaration setting out their travel history for the 14 days before their scheduled flight”.

Part of the evidence placing Djokovic in Serbia within the 14-day window before he went to Australia centres around a video of an impromptu tennis match showing Djokovic playing with an unidentified individual on Dec. 25 on a Belgrade street.

The video posted on the Instagram account of Belgrade real estate executive Igor Rogan showed someone matching Djokovic’s description, wearing jeans and a raincoat, playing tennis in a street. Reuters identified the location as West 65, a high-end apartment complex in Belgrade’s Novi Beograd district. A branch of Rogan’s real estate firm can be seen in the background.

The video was posted on Dec. 25, with a caption saying it was recorded on the same day. When the firm was contacted by Reuters, a female employee at the company where Rogan works said the branch in West 65 was open for business on Dec. 25 and that Rogan recorded the video in Belgrade the same day.

“I remember it was on the Catholic Christmas,” she said. Orthodox Christians, who are the majority in Serbia, celebrate Christmas on Jan. 7. She asked not to be identified. She declined to answer further questions, referring inquiries to Rogan. He told Reuters he did not wish to comment.

The two eyewitnesses who spoke to Reuters, and who declined to be named, said they had seen Djokovic in the vicinity of the same apartment complex.

The accounts the three individuals provided to Reuters support prior posts on social media.

A picture posted on Twitter, also on Dec. 25, by a user called Danilo Skerovic showed Djokovic posing with a fan in front of the same apartment block. The tennis player was wearing the same outfit as he had in the video posted by Rogan, with a tennis racket in one hand and a tennis ball in the other. Skerovic did not respond to messages seeking comment.

Another picture of Djokovic was posted on the same day on the Instagram account of Petar Djordjic, an athlete who plays handball for the Serbian national team and the Portuguese club side S. L. Benfica. The photo showed Djokovic, in the same outfit and against the same backdrop, posing alongside Djordjic. Djordjic did not respond to messages sent on Tuesday to his mobile phone number. S. L. Benfica did not respond to a request for comment.

While being interviewed by an immigration official at Melbourne airport, Djokovic said the Australian travel declaration was completed by his agent, according to a transcript of the interview released as part of the legal challenge. Elena Cappellaro, who acts as his agent, did not respond to a request for comment on whether she completed the form.

Public opinion in Australia, which is battling an Omicron wave of infections and where more than 90% of the adult population is double vaccinated, has been largely against the player. Serbian supporters of the tennis player alleged he was being made a scapegoat by the Australian authorities.