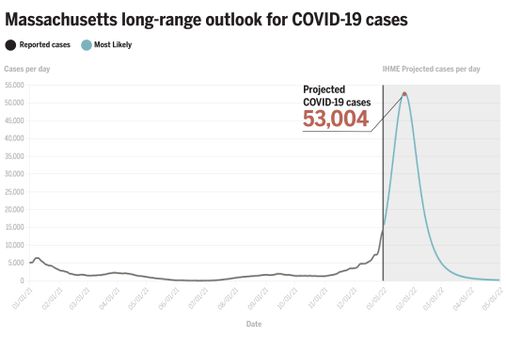 Models from the University of Washington Institute for Health Metrics and Evaluation and the Centers for Disease Control and Prevention both suggest the burgeoning caseloads will further tax the already stretched health care system in the state, with hospitalizations, for example, forecast to increase significantly.

A new IHME model forecasts the state’s case numbers will most likely peak at 53,004 new cases per day on Jan. 22, more than double the current number. The state on Tuesday reported a seven-day average of 24,723 daily confirmed and probable cases.

Maybe most alarming is how the surge will affect the state’s hospitals, most of which report they are fast approaching capacity in both their regular wards and intensive care units. The IHME model, for example, estimates that the number of hospital beds needed for COVID-19 patients in Massachusetts will peak in late January at 5,882. That’s nearly double the current figures, with some 2,970 patients hospitalized with COVID-19, the state reported Tuesday. The need for ICU beds, a subset of total beds, is also forecast to peak in late January.

COVID-19 hospitalizations are “putting a massive strain on the system,” said Scarpino.

Deaths are forecast to peak at 69 a day on Jan. 30, according to the IHME model, which was updated Saturday. As of Tuesday, the seven-day average of confirmed and probable deaths reported by the Massachusetts Department of Public Health was just over 50.

A separate forecast from the CDC covering a shorter time frame offers a somewhat different picture, but likewise foresees COVID-19 hospitalizations and deaths continuing up, then turning down toward the end of January.

The CDC publishes ensemble forecasts, which combine multiple independent models to improve accuracy. The forecasts are published weekly, with the time window limited to four weeks.

The CDC no longer includes estimates of new infections in its model, due to concerns about their reliability. But its forecast of daily hospital admissions in Massachusetts calls for them to peak at 438 a day on Jan. 25 and then tick downward. The seven-day average of new COVID-19 hospital admissions in the state was 313 as of Jan. 4.

The CDC death forecast calls for weekly deaths to peak at 387, or about 55 per day, in the week ending Jan. 22, and then tick downward.

Matthew Fox, a professor of epidemiology and global health at Boston University School of Public Health, said Friday that he expected cases in Massachusetts to peak in two to four weeks, although it could even happen within a week.

Fox cautioned, however, “No one knows for sure. Anyone who tells you with certainty is just giving you their best guess.”

Scarpino of the Rockefeller Foundation said Friday that the models he’s reviewed suggest the peak in cases is coming in the next one to two weeks, with the Northeast, from Washington, D.C., to Boston, leading the way, with cases then declining sharply.

Hospitalizations and deaths will peak in the weeks after that, he said, with deaths not peaking until well into February.

Experts expect the decline in cases to be swift, citing the example of South Africa, where Omicron emerged, drove cases up steeply, then nosedived.

“We know that the drop will be quite fast. Omicron moves through so quickly because it burns through the susceptible population very fast,” said Fox.

The peak may come sooner on the East Coast and arrive later in other areas, including the Midwest, experts say.

In a media briefing Friday, CDC Director Rochelle Walensky said, “I do think in places that we are seeing this really steep incline, that we may well see also a precipitous decline,” noting that the hardest hit area is currently the Northeast. She said a pattern of sharp increase and decline, which she described as icepick-shaped, could spread across the country.

Andrew Noymer, an associate professor of population health and disease prevention at the University of California at Irvine, pointed out another difference: the United States is experiencing winter, while South Africa is in the midst of summer. And he noted that European countries such as Denmark and the Netherlands, which he considered “better facsimiles” of Massachusetts, haven’t seen steep declines.

“The truth is: No one knows if it’s going to follow the South African model or the Denmark model,” he said.

Experts say the hospitalization forecasts are a major concern.

“The big picture is hospitals. Your hospitals have to be ready,” said Ali H. Mokdad, professor of health metrics sciences at the UW Institute for Health Metrics and Evaluation. “The coming two to three weeks we need to have a plan to manage our hospitalizations.”

The United States set yet another record Tuesday, with 145,982 people hospitalized with COVID-19 nationwide, The Washington Post reported. The IHME model estimates that nationwide hospitalizations will peak at around 273,000 on Jan. 25. (Modelers also offered a caveat to the numbers, noting that they believe a “substantial fraction” of hospitalizations are “incidental admissions” — people who came to the hospital for some other reason but were found to have COVID-19 during routine testing.)

In Massachusetts, while Omicron is generally producing milder illness in fully vaccinated people, the sheer number of people getting infected, coupled with others who do not have COVID but are critically ill from putting off care for chronic illnesses like heart disease and diabetes, has swamped hospitals.

Governor Charlie Baker has deployed the National Guard to help hospitals and ordered them to cancel nonessential surgeries to accommodate the rising tide of patients. He activated 500 Guard members last month and announced Tuesday that he would activate another 500. “There’s no question at this point in time that staffing remains an enormous challenge for many of these providers,” he said.

Even as cases skyrocket and hospitals fill up, there’s some hope, experts said.

“Omicron being milder does seem to be a genuine thing,” Noymer said, saying it was still possible that “deaths will be less bad than our worst fears.”

He said that in the United Kingdom, cases have been “off the charts,” but the death numbers have not risen as much as they did last winter. “Assuming the UK experience carries out here, there’s going to be more people leaving the hospital through the front door and not through the morgue.”

“There has been, to some extent, a decoupling of cases and deaths,” he said.

Kay Lazar of the Globe staff contributed to this report.

Sorgente articolo:
Models show Omicron cases may peak in Mass. within two weeks, while hospitalizations could continue to surge – The Boston Globe