The Omicron variant has fundamentally changed the dynamics of this pandemic – and it is blaring a wake-up call to Americans that the ‘Covid Zero’ philosophy and policies are now absurdly unworkable.

Figuratively, if not literally, everyone is going to catch Omicron eventually – and some people will be asymptomatic, and not even know they have it.

The good news is that healthy vaccinated people have no reason to fear catching Omicron.

If – perhaps it’s more appropriate to say when – you catch the Omicron variant, it will likely seem like a bad cold, or perhaps a mild one. Or you may be asymptomatic. Vaccinations and acquired immunity from past infections mean that this ongoing Omicron wave is going to feel like a bad flu season.

And we have never spent winters locked in our houses, terrified of interacting with people for fear of catching the flu.

So what is so special about Omicron?

It’s hardly surprising that many people, two years into this pandemic, are still operating on the psychological equivalent of DefCon 1.

The world has endured something that at the outset was frightening and traumatic. The first four variants were deadly. Initially, we had no viable treatments or vaccines.

But we do now, and a COVID death rate that has fallen dramatically from where it was in 2020 and early 2021 reflects that.

The trouble is that much of the mainstream media coverage of the current wave doesn’t reflect that. 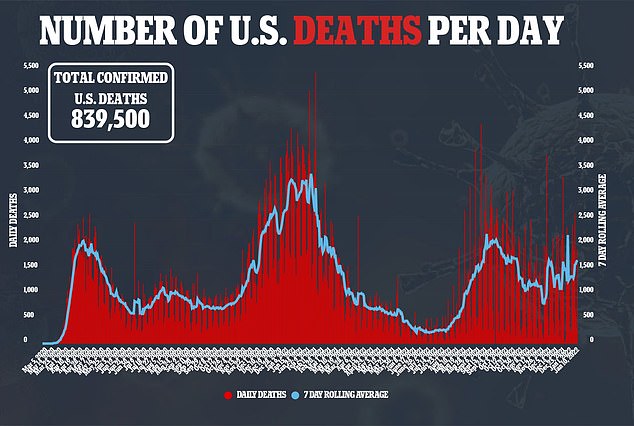 The number of new deaths has increased by just 17 percent in the past two weeks – a much more gradual incline and lower than peaks of new deaths in April 2020 and January and September 2021. 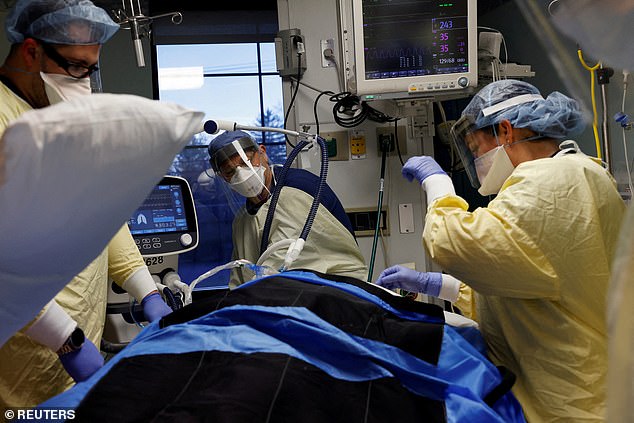 From South Africa to the United Kingdom to the U.S. , studies indicate that patients with Omicron are less likely to end up in the hospital, and if they do require hospitalization, they are more likely to recover and get discharged quicker. (Above) Medical staff treat a coronavirus disease patient in Cuyahoga Falls, Ohio on January 4, 2022.

And while we may have sympathy for those unable to let go of an all-consuming fear, it is not a rational response, and it has long ago stopped being a productive or healthy response. It is a response that chooses fear and isolation over the evidence, right in front of our eyes.

The first key change that the paranoid refuse to acknowledge is that Omicron is much less virulent than Delta and other previous variants.

From South Africa to the United Kingdom to the U.S., studies indicate that patients with Omicron are less likely to end up in the hospital, and if they do require hospitalization, they are more likely to recover and get discharged quicker.

Omicron is extremely contagious, but thankfully not extremely deadly.

As of Monday, the number of new cases in the United States has increased 216 percent over the past two weeks – basically, the line representing the average number of new cases on the CDC chart is going straight up, reaching a peak way higher than the previous peak of January 2021.

Meanwhile, the number of new deaths has increased by just 17 percent in the past two weeks – a much more gradual incline and lower than peaks of new deaths in April 2020 and January and September 2021.

Why is Omicron less likely to kill you?

This variant doesn’t appear to thrive in human lungs the way its predecessors did.

According to a study published last month from researchers at the University of Hong Kong, the Omicron variant particularly flourishes in the bronchus, the two large tubes that carry air from your windpipe to your lungs and back – replicating perhaps up to 70 times faster than the Delta variant or the original SARS-CoV-2 virus. Rapid reproduction in the bronchus probably results in an infected person exhaling more of the virus with every breath, making the virus spread faster.

The good news is that the Omicron variant doesn’t flourish as well in the lungs – perhaps as much as ten times slower – and Omicron’s inability to replicate quickly inside the lungs likely gives the infected person better odds of overcoming the infection.

In recognition of the finding that Omicron is less deadly than previous variants for the vast majority of the population, the Centers for Disease Control and Prevention slashed the recommended amount of time that a positive COVID person must spend in quarantine. 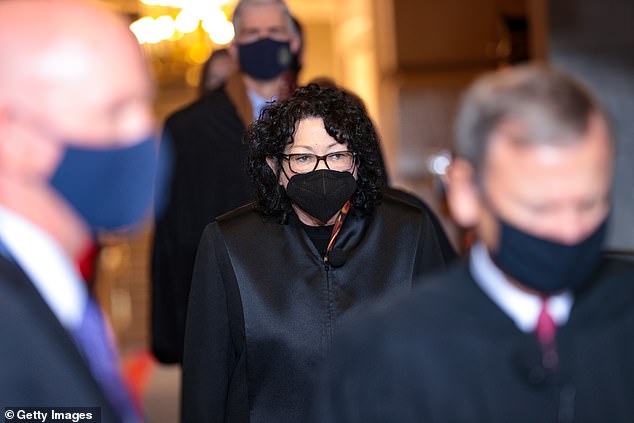 When a Supreme Court justice like Sonia Sotomayor (above) falsely contends that ‘we have over 100,000 children, which we’ve never had before, in serious condition and many on ventilators,’ it is a flashing neon sign that even some of the most powerful people in the country operate in a dark fantasyland, and believe the pandemic is apocalyptic in its severity and scale.

Instead of spending 10-days in isolation, a person with COVID can leave isolation after 5-days, if they are not exhibiting symptoms.

It makes sense — the CDC was acknowledging that it is bad for us all to unnecessarily lockdown productive members of society over minor illnesses that most likely won’t hurt other healthy people. All Americans should have been cheering the decision, but they didn’t.

Dr. Anthony Fauci, ostensibly the voice of the COVID-lockdown long haulers, went on TV and justified their worry. These concerned Americans apparently wanted people recovering from COVID to be required to receive a negative test before rejoining society.

‘People are getting concerned about ‘why not test people at that time?’ I, myself, feel that that’s a reasonable thing to do,’ Fauci said on CNN.

Thankfully, the CDC did not honor the hysteria. They did not walk back the new recommendations, but in a nod to the lockdown long haulers the CDC did say that if you want to test – you’re welcome to do so.

The second key change that irrational COVID handwringers ignore is that Omicron is so contagious, many of our previous preventative measures are ineffective. A lot of our past pandemic arguments are becoming moot with this new variant.

Cases are exploding in jurisdictions with strict masking rules, indicating masking is a futile policy, unless people are wearing surgical-grade or N95 masks with a religious devotion. (No, the virus doesn’t politely pause while you’re eating or drinking.)

Just think of all of the public squabbles we’ve witnessed over the past two years over cloth masks, that were, apparently all along, ‘not appropriate for this pandemic.’

Interestingly, some of the mask battles have now intensified and they are most fierce when it comes to the least vulnerable and most compliant segment of the population – children. Instead of concluding that masks may be less important in combating a highly contagious virus that nearly everyone may be exposed to – many have concluded that they are more important.

The CDC has just recommended KN95s and KF94s masks indoors for all students two years and older – despite ever-increasing evidence of the harm masks do to child development and the continuing fact that children are simply not at serious risk of Covid unless they have some other condition.

A parent in Minneapolis, who reviews masks, has developed a combined audience of 50,000 Twitter and YouTube followers. And on Long Island, New York, masking kids is the political controversy du jour as the Democratic governor and a Republican county executive tussle over mandatory masking for school children.

Vaccines help mitigate the virus’ effect, but it is no longer even remotely accurate to contend, as MSNBC host Rachel Maddow said last March, ‘the virus stops with every vaccinated person… it cannot use a vaccinated person as a host to get more people.’

Much like the mask wars, the vaccination mandate wars are turning into a waste of energy, overtaken by events.

Finally, it is also now clear that the most ‘elite’ among us metaphorically travel in circles of the most paranoid and panicky. Too many elected officials, public health officials, and university administrators are primed to panic over the latest hysterical headline.

Amid headlines like, ‘Children are hospitalized with Covid at record numbers’ Fauci tried to tamp down the anxiety.

He told MSNBC, ‘… if a child goes in the hospital they automatically get tested for COVID and they get counted as a COVID hospitalized individual, when in fact they may go in for a broken leg or appendicitis or something like that.’ But the damage was done.

When a Supreme Court justice like Sonia Sotomayor falsely contends, during oral arguments, that ‘we have over 100,000 children, which we’ve never had before, in serious condition and many on ventilators,’ it is a flashing neon sign that even some of the most powerful people in the country operate in a dark fantasyland, and believe the pandemic is apocalyptic in its severity and scale. (There are there are fewer than 3,500 current pediatric hospitalizations from COVID-19. Where is Sotomayor getting her information from?) 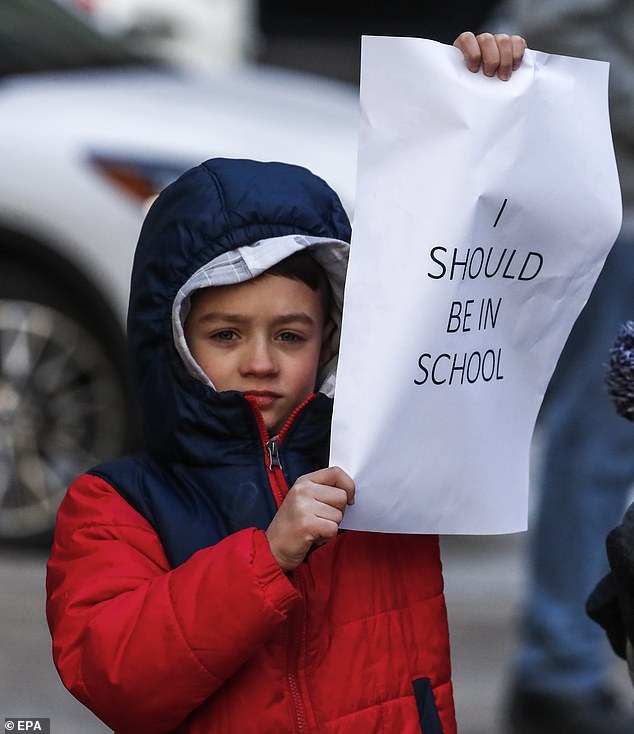 America’s colleges and universities are treating students like they are the among the most vulnerable, requiring them to stay in their dorm rooms and wear masks outdoors even though as fit, young, vaccinated adults they are pretty much the LEAST likely to get seriously ill.

These were harsh and scientifically dubious policies before vaccination. With vaccines and boosters, and with a milder variant, these policies are insane.

To be as afraid of Omicron in early 2022 as you were of the original Covid-19 in March 2020 is to ignore reality – to ignore the effectiveness of vaccines and boosters, the development of new treatments, and the milder form of this variant. Living in fear of a milder virus, after getting vaccinated and boosted, is choosing a form of self-immiseration.

This is a different phase of the pandemic, the transition to the virus becoming endemic – meaning never going away completely, but no longer an all-consuming threat.

Covid is becoming another seasonal upper respiratory disease – a particular concern for the unvaccinated, the elderly, the immunocompromised, and those with multiple comorbidities, but not a reason to shut down society.

Of course, new variants will emerge – just as the common cold and flu viruses mutate every year – but that is never front-page news and neither are daily flu deaths, let alone infection numbers.

And new variants that emerge are just as likely to be even milder than Omicron than more dangerous.

We need to stop fetishizing one threat to our health among many, put it in its proper perspective and return to living our normal lives — alongside the virus.

Jim Geraghty is the senior political correspondent of National Review and the author of five books, most recently, Hunting Four Horsemen.

Sorgente articolo:
This Omicron wave is NOT like the others. America needs to ditch debilitating terror: JIM GERAGHTY – Daily Mail