Amid Bedouin riots and a major coalition crisis over controversial tree-planting in disputed parts of the Negev Desert, a report said Wednesday that the government was advancing a comprehensive plan to recognize some unrecognized villages.

For the second night in a row, residents of southern Bedouin communities clashed violently with police Wednesday night over the three-day Jewish National Fund planting in the region, seen by the Bedouin communities as part of a government effort to expel them from their unrecognized hamlets.

Police said Thursday morning that 21 rioters were arrested during the night in Tel Sheva, Segev Shalom and Rahat. On the previous night, 18 people were arrested.

The planting, and the violent clashes with police that ensued, turned into the latest crisis that threatened to topple Israel’s nascent, motley coalition, with the Islamist party Ra’am vowing to boycott plenum votes as long as Keren Kayemet L’Yisrael-Jewish National Fund’s (KKL-JNF) forestation work continued in the Negev, where Ra’am’s largest bloc of support is located.

Meanwhile, some MKs from the right-wing Yamina and New Hope parties, who campaigned pledging to clamp down on alleged Bedouin lawlessness in the Negev, pressed for the forestation work to continue, viewing it as part of an effort to entrench Jewish presence in the area. Authorities say the land belongs to the state and have contracted KKL-JNF to plant there.

According to the Kan public broadcaster, which cited unnamed sources with knowledge of the matter, an “unprecedented” plan to be advanced by the government would include recognition of 10 to 12 Bedouin villages that are currently illegal. 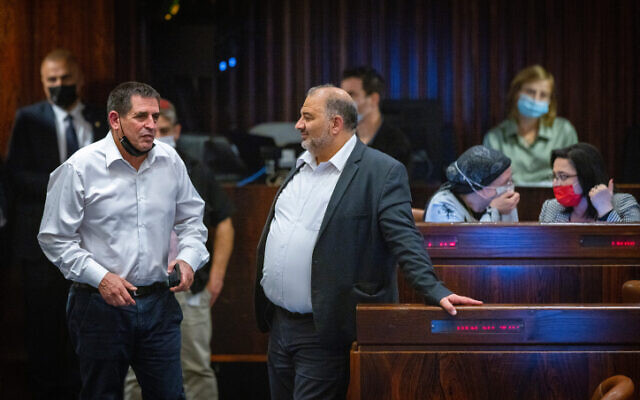 The plan will be expedited due to the continued riots and negotiations were set to begin Thursday, the report said.

The report said that planned planting in the most contentious areas — where the Bedouin al-Atrash clan lives — won’t resume next week to give the negotiations a chance to progress.

Planting in other areas, however, was set to be held as planned.

Welfare Minister Meir Cohen, the government point man on the legalization of unrecognized Bedouin villages, said Wednesday that he managed to negotiate an agreement between the sides to hold negotiations starting Thursday to reach a compromise on the matter.

According to Kan, Ra’am has said its members would only attend Knesset sessions next week if comprehensive negotiations were started on the recognition of Negev Bedouin villages.

Explainer: Why tree planting in the Negev sparked protests, riots and a coalition crisis

“We have been planting trees in the Negev for 15 years in the same format as right now,” Duvdevani said. “There was nothing different from what we have been doing all these years. We have no idea what’s different now. The instructions to halt plantings have been sporadic, and we resumed full work after a few days.

“We will continue planting in the entire Negev. This is part of the Zionist vision.” 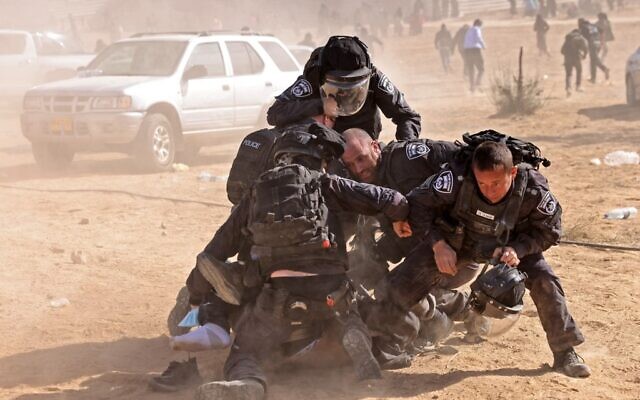 Israeli police detain a man as Bedouins protest in the southern Negev Desert against a forestation project by the Jewish National Fund (JNF), on January 12, 2022. (AHMAD GHARABLI / AFP)

The crisis spilled over into the Knesset plenum, with Ra’am chairman Mansour Abbas saying that his four-MK party would not vote with the coalition until the matter was resolved.

“We have no right to exist without the Negev,” he told Channel 23 news on Wednesday. “We suffer every day to be partners in the coalition.”

In response to the announcement from Abbas, Yamina MK Nir Orbach announced Wednesday that he too would not attend plenum votes so long as Ra’am refused to do so as well. And Meretz MK Yair Golan threatened to do the same too, after Housing Minister Ze’ev Elkin of the New Hope party vowed that the tree-planting would continue.

With a narrow 61-seat majority in the Knesset, the absences threatened to prevent the coalition from passing any legislation so long as the crisis continues.

Indeed, with the coalition lacking numbers, opposition lawmakers began submitting legislation for preliminary approval before the plenum on Wednesday evening. To avoid the embarrassment, coalition MKs left the plenum and several pieces of legislation advanced overwhelmingly, including a bill from Joint List MK Ahmad Tibi that would require police officers to wear body cameras when securing protests. The opposition’s bills are still unlikely to pass subsequent readings, but the events concluded a humiliating day for the coalition. 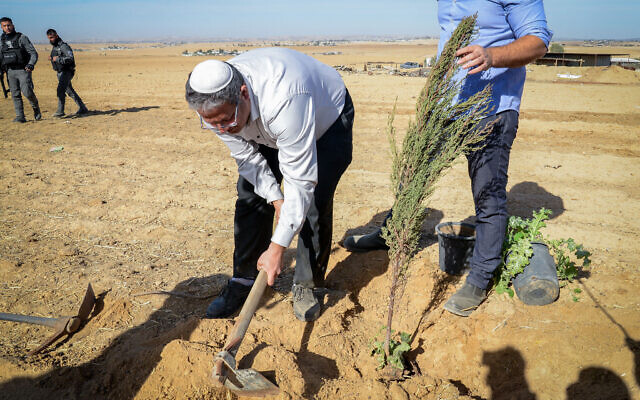 On Thursday, Joint List party chief Ayman Odeh of the opposition took a swipe at Ra’am, alleging in an Army Radio interview that “Mansour Abbas wouldn’t have done anything about this if not for the protests and resistance on the ground and our struggle against the plantings. He accepted what is happening in the Negev.”

Joint List and Ra’am are seen as competing for the votes of the Negev Bedouins following the death of Ra’am MK Said al-Harumi, who had been seen as representing that population. 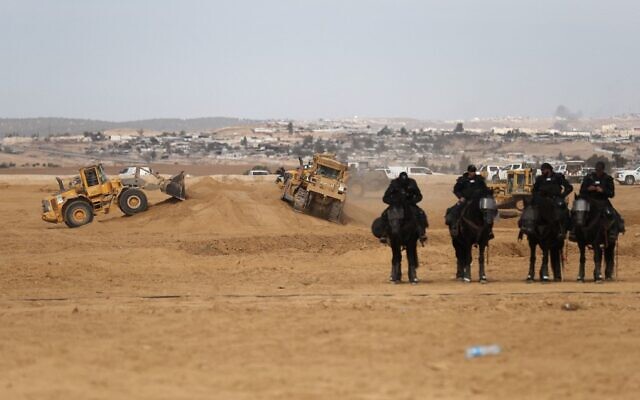 Mounted police stand guard during a protest by Bedouins in the southern village of Sawe al-Atrash in the Negev Desert against a forestation project, January 12, 2022. (Ahmad Gharabli/AFP)

Negev Bedouin have a contentious relationship with the state. For decades, the government has sought to move them into recognized, planned cities, but many still live in a constellation of illegal hamlets that sprawl across Israel’s southern desert.

Bedouins accuse KKL-JNF of seeking to displace them, but the organization says it is merely fulfilling a request by other government bodies on public land. KKL-JNF works across Israel on nature and conservation projects, but some charge the organization has a political agenda.