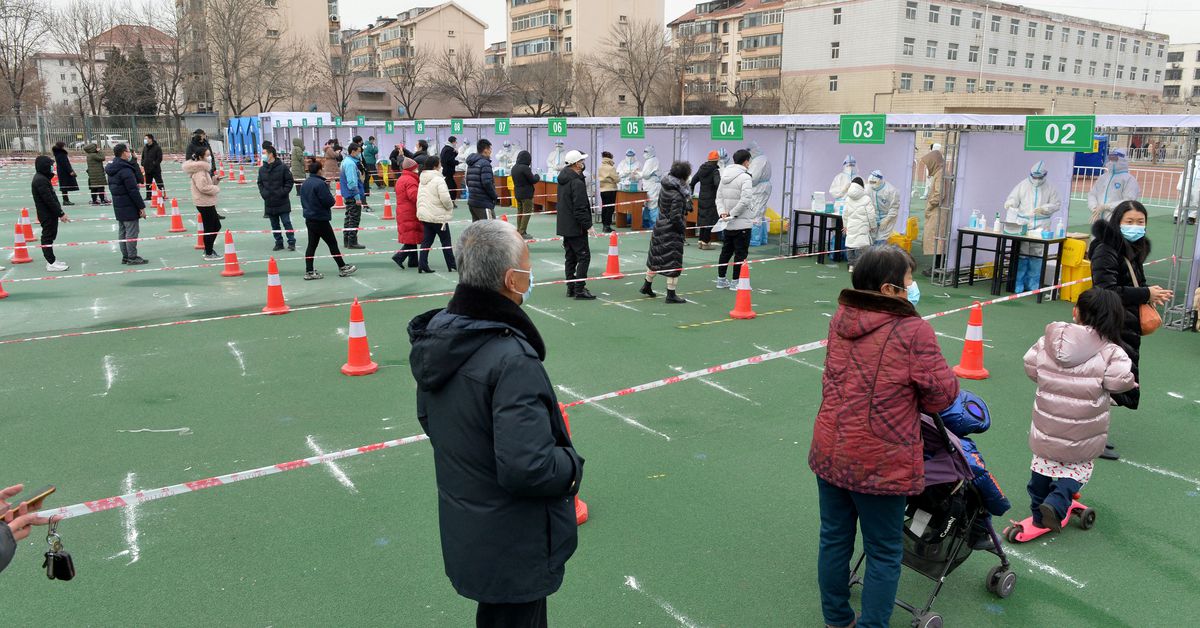 BEIJING, Jan 13 (Reuters) – The Chinese port city of Tianjin reported an increase in COVID-19 infections on Thursday as it stepped up efforts to rein in an outbreak that has spread the highly transmissible Omicron variant to another city.

Omicron has brought new challenges to China’s strategy to quickly extinguish local outbreaks, which has taken on greater urgency in the run-up to the Winter Olympics starting on Feb. 4 and with the busy Lunar New Year holiday travel season beginning later this month.

Volkswagen Group’s (VOWG_p.DE) China unit said on Thursday it has shut a vehicle plant it jointly runs with FAW Group in Tianjin, as well as a component factory since Monday due to the outbreak. read more

Tianjin, in northern China around 100 km (62 miles) from the capital Beijing, reported 41 domestically transmitted infections with confirmed symptoms on Wednesday, up from 33 a day earlier, National Health Commission data showed.

Dalian in the northeast also reported an individual arriving from Tianjin had tested positive for the Omicron variant, the city’s government said. Dalian said the virus situation was “largely controllable”.

Anyang in central Henan province reported 43 local symptomatic cases on Wednesday. The city detected two Omicron infections on Monday and said the flare-up could be traced to a student arriving from Tianjin. read more

Case numbers in Tianjin and Anyang are tiny compared with outbreaks in many other countries, although the number of local Omicron infections is unclear. Still, officials imposed varying restrictions on movement within the cities and out of town.

Across China, several cities have ordered quarantine for people who have recently visited Tianjin or Anyang. Many cities, including Beijing, are also encouraging people to stay put during the Lunar New Year holiday.

Citing the risk posed by Omicron and the need to ensure the Olympics Games are safe, the Beijing city government encouraged commuters from satellite towns to work from home.

There were no new deaths for Wednesday, leaving the death toll since the virus was first found two years ago in China unchanged at 4,636.

Zhang Wenhong, director of an COVID-19 treatment team in Shanghai, said on Thursday the public health clinic there was also now facing a record number of infections arriving from overseas.

Imported cases in Shanghai during the first 10 days of this month have already exceeded the total for the whole of December, Reuters calculations showed. It remains unclear how many of those were Omicron.

China has suspended more U.S. flights after a surge in infected passengers.

Tough measures against local outbreaks included the punishment of officials. In Anyang, as of Wednesday 11 individuals have been held to account for failing to properly control the virus.

Two hospitals in Xian were ordered by the city government on Thursday to suspend operations for three months after failing to fulfill their duty to provide medical care during the outbreak.

The story of a pregnant woman who lost her unborn baby after waiting outside the other Xian hospital for two hours had provoked anger on Chinese social media and led to punishment of city officials. read more