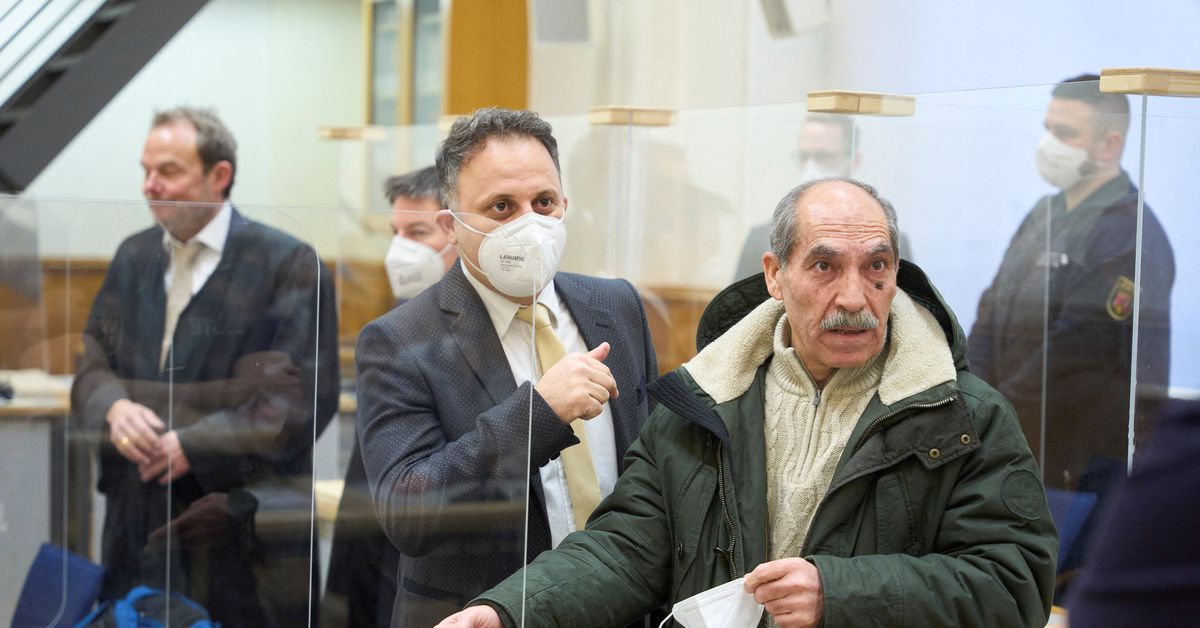 KOBLENZ, Germany, Jan 13 (Reuters) – A German court on Thursday jailed a Syrian ex-intelligence officer for life for murder, rape and crimes against humanity, handing down the first ever conviction for state-backed torture committed during Syria’s civil war after a landmark trial.

Anwar Raslan was found guilty on 27 of out 58 counts of murder, rape and sexual assault carried out at a Damascus prison run by a unit of President Bashar al-Assad’s security services that he headed.

The 58-year-old, a colonel when he defected to the Syrian opposition in 2012 and who prosecutors said was granted asylum in Germany two years later, had denied all charges.

The trial was held under Germany’s universal jurisdiction laws, which allow courts to prosecute crimes against humanity committed anywhere in the world.

Prosecutors supported by the European Center for Constitutional and Human Rights (ECCHR) had gathered evidence since 2016 from nearly 50 Syrian torture survivors living in Germany, and from others based elsewhere in Europe, the ECCHR – an NGO founded by lawyers in 2007 – said.

Mariam Alhallak, whose son died during interrogations by government agents after being abducted at Damascus University in 2012, the year after the war began, welcomed the verdict.

“It means a lot to me because I have a feeling that justice is happening,” she said outside the court in the western German city of Koblenz, one of a group of Syrian mothers holding pictures of children they said were killed or tortured in Syrian government facilities.

“It’s a small step toward the justice we hope will be achieved: accountability for all those who committed violations, including the criminals who killed my son.”

“This is a clear example of how national courts can and should fill accountability gaps for such crimes wherever they were committed,” she said in a statement from Geneva, urging other states to employ the same princples of extra-territorial jurisdiction.

Anwar R, a former Syrian officer of Syrian President Bashar el-Assad’s intelligence agency arrives at the higher regional court of Koblenz before the verdict in his trial for crimes against humanity, including torture and killing in Koblenz, Germany, January 13, 2022. Anwar R. received a life time sentence by the court. Thomas Frey/Pool via REUTERS

Inside the court Raslan, dressed in a black jacket and wearing glasses and a white face mask, gave a brief, wry smile as he waited for the verdict to be read out after a police officer removed his handcuffs.

Syrian human rights lawyers said he had defected to Turkey before moving on in 2014 to Germany, where he contacted police saying he feared former colleagues could take his life. He was arrested by German authorities in 2019.

The verdict against Raslan, which will give hope to survivors of atrocities committed during the war after attempts to establish an international tribunal for Syria failed, was the second handed down during the trial, which began in April 2020.

Last year, another former member of the Syrian intelligence services was sentenced to 4-1/2 years in jail for abetting the torture of civilians.

“The trial demonstrates that accountability for the Assad regime’s heinous atrocities is possible … if national prosecutors and judges choose to act,” said Eric Witte of the Open Society Justice Initiative, which supported several witnesses in the case.

“As much as we welcome the outcome of this trial, we must not forget that the cruelty of the crimes proved in court continues to this day in Syria.”

A second trial of a Syrian doctor suspected of crimes against humanity, including torturing prisoners at a military hospital in the city of Homs in 2011 and 2012 and killing one using a lethal injection, opens in Frankfurt next week.

At the U.N. Security Council, Russia and China have vetoed attempts by Western powers to refer the Syrian crisis to the International Criminal Court, leaving survivors of torture and chemical weapons attacks with limited options to seek justice.

But some of the estimated 800,000 Syrians living in Germany have opposed the Koblenz trial, saying it discourages defections by Syrians who may have more evidence of crimes committed by the government, after Raslan was encouraged by senior opposition members to change sides.

“It is natural that Syrians are going to have different views on how to seek justice,” said Witte. “Some want an amnesty and to save the trial for Bashar al-Assad and his top officers.”