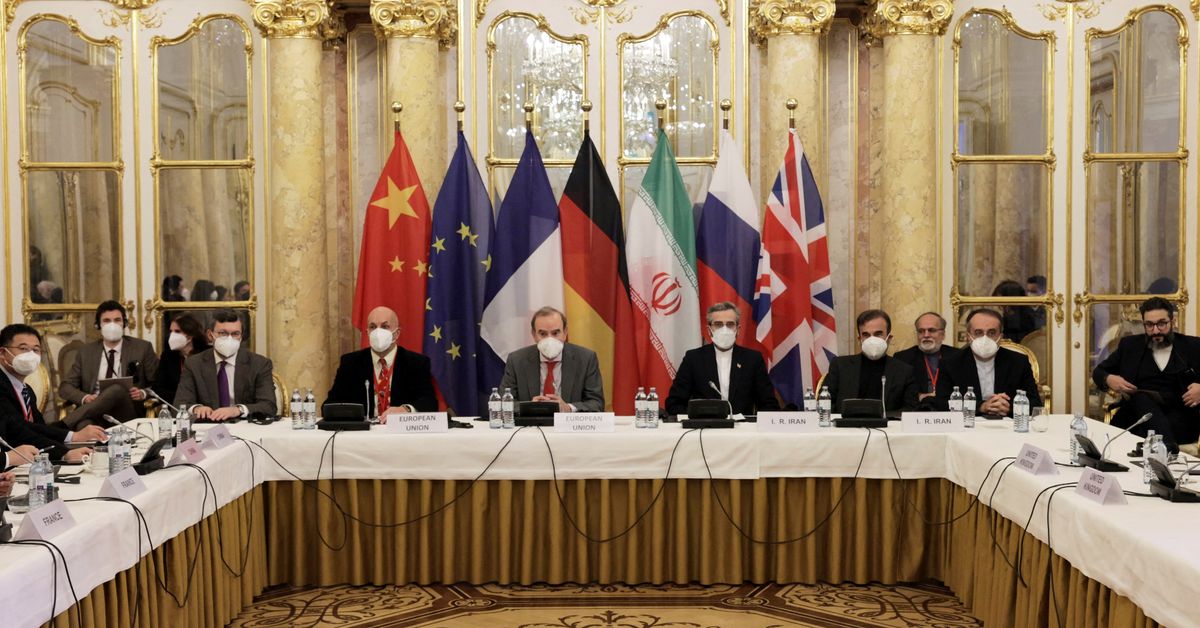 DUBAI, Jan 12 (Reuters) – Iran and the United States are displaying little flexibility on core issues in indirect nuclear talks, raising questions about whether a compromise can be found soon to renew a 2015 deal that could dispel fears of a wider Middle East war, diplomats say.

After eight rounds of talks the thorniest points remain the speed and scope of lifting sanctions on Tehran, including Iran’s demand for a U.S. guarantee of no further punitive steps, and how and when to restore curbs on Iran’s atomic work.

The nuclear deal limited Iran’s uranium enrichment activity to make it harder for it to develop nuclear arms – an ambition Tehran denies – in return for lifting international sanctions.

But former U.S. President Donald Trump ditched the pact in 2018, saying it did not do enough to curb Iran’s nuclear activities, ballistic missile program and regional influence, and reimposed sanctions that badly damaged Iran’s economy.

After waiting for a year, Iran responded to Trump’s pressure by gradually breaching the accord, including rebuilding stockpiles of enriched uranium, refining it to higher fissile purity and installing advanced centrifuges to speed up output.

Following months of stop-start talks that began after Joe Biden replaced Trump in the White House, Western officials now say time is running out to resurrect the pact. But Iranian officials deny they are under time pressure, arguing the economy can survive thanks to oil sales to China. read more

A former Iranian official said Iran’s rulers “are certain that their uncompromising, maximalist approach will give results”.

France said on Tuesday that despite some progress at the end of December, Iran and world powers were still far away from reviving the deal. read more

The United States on Wednesday cited “modest progress” in recent weeks, but not enough.

“Modest progress is also not sufficient if we are going to” revive the 2015 deal, State Department spokesman Ned Price told reporters.

Iran insists on immediate removal of all Trump-era sanctions in a verifiable process. Washington has said it would remove curbs inconsistent with the 2015 pact if Iran resumed compliance with the deal, implying it would leave in place others such as those imposed under terrorism or human rights measures.

“Americans should give assurances that no new sanctions under any label would be imposed on Iran in future. We need guarantees that America will not abandon the deal again,” said a senior Iranian official.

Iran’s Nournews, a media outlet affiliated to the Supreme National Security Council, reported on Wednesday that Iran’s key conditions at the talks “are assurances and verifications.”

U.S. officials were not immediately available to comment on the question of guarantees. However, U.S. officials have said Biden cannot promise the U.S. government will not renege on the agreement because the nuclear deal is a non-binding political understanding, not a legally-binding treaty.

Asked to comment on that U.S. constitutional reality, an Iranian official said: “It’s their internal problem”. On the issue of obtaining verification that sanctions have been removed – at which point Iran would have to revive curbs on its nuclear programme – the senior Iranian official said Iran and Washington differed over the timetable.

“Iran needs a couple of weeks to verify sanctions removal (before it reverses its nuclear steps). But the other party says a few days would be enough to load oil on a ship, export it and transfer its money through banking system,” the official said.

Shadowing the background of the talks have been threats by Israel, widely believed to have the Middle East’s only nuclear weaponry but which sees Iran as a existential threat, to attack Iranian nuclear installations if it deems diplomacy ultimately futile in containing Tehran’s atomic abilities and potential.

Iran says it would hit back hard if it were attacked.

A Western diplomat said “early-February is a realistic end-date for Vienna talks” as the longer Iran remains outside the deal, the more nuclear expertise it will gain, shortening the time it might need to race to build a bomb if it chose to.

“Still we are not sure whether Iran really wants a deal,” said another Western diplomat.

Iran has ruled out adhering to any “artificial” deadline.

“Several times, they asked Iran to slow down its nuclear work during the talks, and even Americans conveyed messages about an interim deal through other parties,” said a second Iranian official, close to Iran’s negotiating team.

“It was rejected by Iran.”

Asked for comment, a State Department spokesperson who declined to be identified told Reuters: “Of course we — and the whole international community — want Iran to slow down their nuclear program and have communicated that very clearly.”

“Beyond that, we don’t negotiate the details in public, but these reports are far off.”

Other points of contention include Iran’s advanced nuclear centrifuges, the machines that purify uranium for use as fuel in atomic power plants or, if purified to a high level, weapons.

“Discussions continue on Iran’s demand to store and seal its advanced centrifuges … They wanted those centrifuges to be dismantled and shipped abroad,” the first official said.

Asked to comment on this question, a Western diplomat said: “We are looking for ways to overcome our differences with Iran about verification process”.