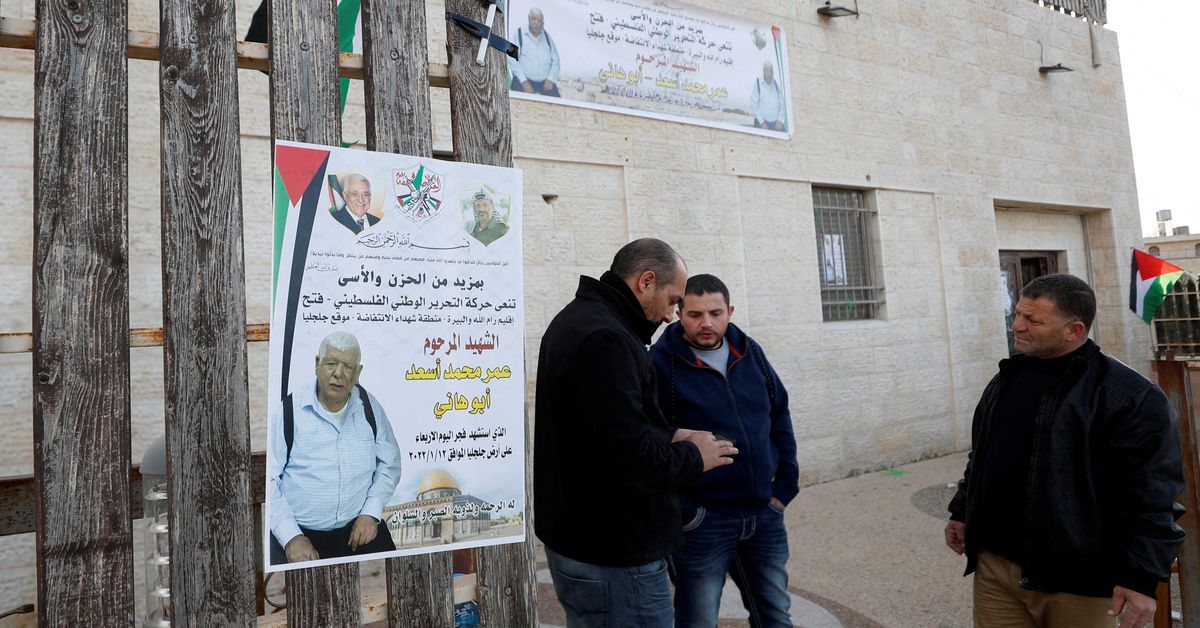 Men stand next to a poster of Palestinian Omar Abdalmajeed As’ad, 80, in Jiljilya village in the Israeli-occupied West Bank January 12, 2022. REUTERS/Mohamad Torokman

JILJILYA, West Bank Jan 12 (Reuters) – An 80-year-old Palestinian-American man was found dead after being detained and handcuffed during an Israeli raid on an occupied West Bank village, Palestinian officials and relatives said on Wednesday.

The U.S. State Department said that Omar Abdalmajeed As’ad was a U.S. citizen and that it had sought clarification from Israel over the incident. His body was found in Jiljilya in the early morning with a plastic zip-tie still around one wrist.

The Israeli military said it had carried out an overnight operation in the village, and that a Palestinian was “apprehended after resisting a check”. It said he was alive when the soldiers released him.

“The Military Police Criminal Investigation Division is reviewing the incident, at the end of which the findings will be transferred to the Military General Advocate Corps,” it said in a statement.

As’ad was a former Milwaukee, Wisconsin, resident who lived in the United States for decades and returned to the West Bank 10 years ago, his brother told Reuters.

State Department spokesperson Ned Price told reporters: “We support a thorough investigation into the circumstances”. He said the State Department had expressed its condolences to the family and offered to provide consular assistance.

As’ad’s family delayed the funeral until Thursday to allow a post-mortem. Islam Abu Zaher, a local doctor who said he had tried to resuscitate As’ad but found no pulse, said there were no obvious signs of injury and the cause of death was unclear.

“It is possible that he suffered a heart attack or some form of panic,” Abu Zaher told Reuters, noting that As’ad had previously undergone open heart surgery and cardiac catheterisation. “We would need to perform an autopsy.”

Jiljilya village council head Fouad Qattoum said As’ad was returning home after visiting relatives when Israeli soldiers stopped his car, bound him, blindfolded him and led him away to a building still under construction. Another villager said he saw Israeli soldiers walking As’ad away around 3 a.m.

As’ad’s body was found more than an hour later, according to vegetable seller Mamdouh Elaboud, who said he was himself detained for 20 minutes, then released.

“After the soldiers were gone, we noticed someone on the ground,” Elaboud, 55, told Reuters. “He was lying face down on the ground and when we turned him over we found an elderly man with no sign of life.”

In a Facebook post, Palestinian Prime Minister Mohammad Shtayyeh blamed Israeli forces for the man’s death and called it a crime.

Israeli military spokesman Lieutenant Colonel Amnon Shefler said the military “will investigate this event in a thorough and professional manner, acting in line with our values and protocols.”

Reporting by Ali Sawafta in Jiljilya and Nidal al-Mughrabi in Gaza: Additional reporting by Simon Lewis and Rami Ayyub in Washington; Writing by Stephen Farrell in Jerusalem; Editing by Peter Graff and Howard Goller