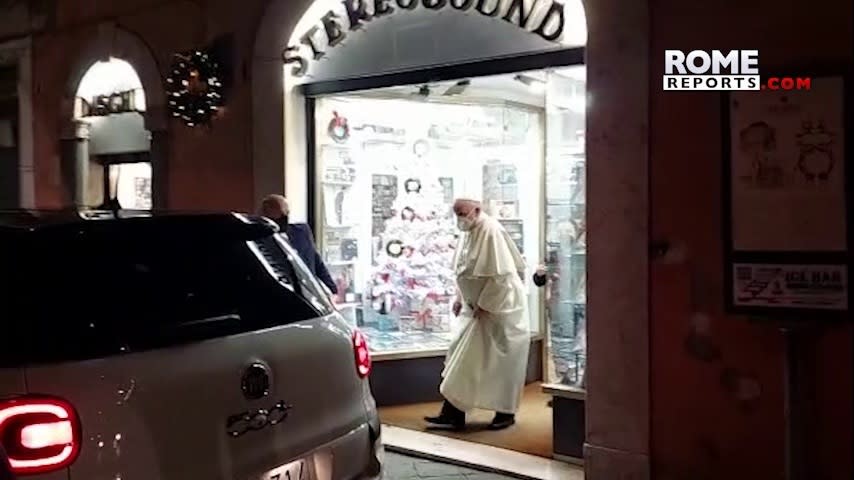 ROME (AP) — Pope Francis has long lamented that he can’t walk around town unnoticed like he used to before becoming pope. But he seems to have nevertheless kept his sense of humor after he was caught on camera making an unannounced visit to a Rome record shop this week.

Francis wrote a note to the Vatican reporter who happened to be in the right place at the right time Tuesday evening when the pope slipped out of the Vatican to bless the newly renovated Stereo Sound shop near the Pantheon.

Javier Martinez-Brocal, director of the Rome Reports news agency, filmed Francis leaving the shop, in footage that went viral and even got written up in the Vatican newspaper, L’Osservatore Romano.

Martinez-Brocal wrote the pope a note afterward, explaining that he wasn’t a paparazzo and regretting Francis can’t move around unnoticed anymore, but adding that the story provided a much-needed dose of good news for a world inundated with tragedy.

“I won’t deny that it was (bad luck) that after taking all the precautions, there was a journalist waiting for someone on the taxi line,” Francis replied. But he added: “You can’t lose your sense of humor.”

Writing in his trademark tiny script, Francis then repeated that what he misses most about being pope is no longer being able to take walks, as he used to do in Buenos Aires. The former Cardinal Jorge Mario Bergoglio was known for taking public transport around the Argentine capital, eschewing the private cars that fellow cardinals usually take to visit parishes. He became pope in 2013.

Francis acknowledged that Martinez-Brocal was only doing his job as a journalist when he recorded the event. “Thank you for doing your vocation, even if it put the pope in difficulty,” he quipped.

The shop owners later told The Associated Press that Francis had arrived unannounced at around 7 p.m., after he had told them during a previous encounter at the Vatican that he would come to visit. “He walked in the shop and it was an amazing meeting. And as he promised, he blessed the shop,” said shop owner Tiziana Esposito.

Co-owner Danilo Genio said Francis was a longtime customer who had popped in whenever he was in Rome for meetings at the Vatican when he was a priest, archbishop and then cardinal in Buenos Aires.

“When he came to Rome to go to the Vatican he used to come here first to buy some gifts,” he said.

Francis, who grew up listening to opera on the radio and loves tango, Mozart and Wagner, didn’t buy anything this time around. But the shop owners gave him a CD of classical music.

Paolo Santalucia contributed to this story.