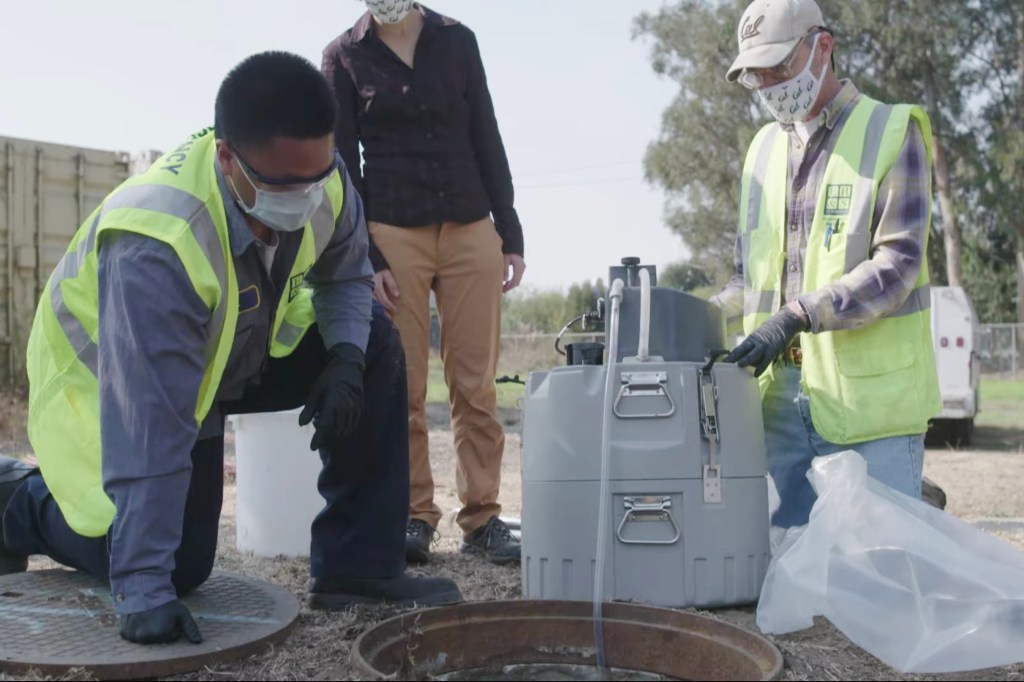 Wastewater was a canary in the COVID-19 coal mine for Bay Area health officials. Over a month ago they pointed to sharply rising virus levels detected in the sewer system as a harbinger of the omicron-fueled case surge. Wastewater tests now show virus levels starting to subside.

Along with modeling at the University of Washington that has proven to be spot-on about the pandemic’s trajectory, and experiences in other states and countries, it suggests the omicron wave is cresting and about to come down in Northern California and across the country. It’s a hopeful sign for a public quite weary of the virus and all the restrictions it brings to their daily lives.

“We are seeing some trends currently that suggest there may be a leveling off or even a downward trend,” said Santa Clara County Deputy Public Health Department Director Michael Balliet, who is overseeing the wastewater monitoring in partnership with Stanford University.

Wastewater monitoring systems in other parts of the country are showing similarly hopeful signs. Massachusetts Water Resources Authority reported Tuesday that virus levels in Boston area sewers had fallen to levels recorded on Dec. 30 — still higher than those seen before this winter, but nearly half peak levels found the first week of January.

Health experts have been expecting, based on last winter’s experience and the trajectory of omicron outbreaks overseas, that this winter’s surge would peak and subside quickly. In the United Kingdom, government data show new COVID-19 daily cases dropped to about 140,000 in the last week, after soaring to more than 200,000 earlier this month. Hospital admissions also have begun to fall.

South Africa, where the omicron variant first emerged in November, already has seen cases peak and fall. Dr. Eric Topol, a molecular medicine professor at Scripps Research, said in a discussion this week at the University of California-San Francisco, that he hopes it is a sign other countries soon will follow.

“We hope that we are seeing sort of early signs that we’re going on a descent,” Topol said. “Maybe this is the encouraging sign that we’re going to get through this descent over the next few weeks.”

The University of Washington’s influential Institute for Health Metrics and Evaluation (IHME) model as of Jan. 8 predicts the present wave of daily U.S. cases will crest at around 1.2 million by Jan. 19 and begin to fall about as fast as it rose — which was meteoric.

By another IHME measure of estimated infections which includes those not confirmed and reported through testing, the latest U.S. surge already peaked Jan. 6 at 6.2 million. Daily U.S. hospital counts are projected to peak Jan. 25 at 273,000 and daily COVID-19 deaths Jan. 24 at 1,930.

The model will be updated again Friday, but Ali Mokdad, a professor of health metrics sciences at the University of Washington in Seattle, said he doesn’t expect projections to change much.

California is seeing a later peak than the rest of the country in part because the virus’ spread has been slowed by more widespread use of face masks and higher vaccination rates, stretching out the wave, Mokdad said. But the University of Washington model projects that more than half the U.S. population will have been infected with the omicron variant over the next six weeks. Mokdad said it’s important for people to wear high quality masks and have up to date vaccinations because omicron is so contagious and many of those who are infected don’t have symptoms.

The variant’s ability to infect people — even those who are vaccinated and masked — is apparent in the numbers compiled by the California Department of Public Health. California health data show the seven-day average of daily cases reaching 79,610 as of Thursday, with 12,927 hospitalizations statewide and an average of 46 daily deaths from the virus. That’s up from 36,282 average daily cases, 8,671 statewide hospitalizations and 44 average daily deaths a week earlier.

But California Human Services Secretary Dr. Mark Ghaly was optimistic Wednesday that the current omicron onslaught will see fewer hospitalizations and deaths than last winter’s COVID surge due to the state’s high vaccination rates and the number of people recovered from previous infection.

Hope that the end of the current surge is just around the corner is evident in the short-term nature of recently imposed restrictions, such as Sonoma County’s ban on large gatherings and universities like San Jose State starting the new term with classes online, all of which are scheduled to end in a month.

Still, there remains some uncertainty. Topol cautioned that there are still rural parts of the country with lower vaccination rates where omicron could take off in a potential second omicron wave. He noted scientists don’t fully understand why it spreads and falls off so fast.

Boehm said that while the unprecedented levels of virus levels in Santa Clara County wastewater over the last month have since “leveled off or in some cases gone down,” there is still cause for concern:

“In previous surges, we had some leveling off for a bit before the true downturn,” Boehm said. “We can’t be sure what the future holds for this surge. New data come in daily, so we will be watching closely.”

Staff Writer Lisa M. Krieger and the Associated Press and NBC News contributed to this report.

Sorgente articolo:
COVID: There are signs omicron is about to crest in Bay Area. One is in our wastewater – Pacifica Tribune