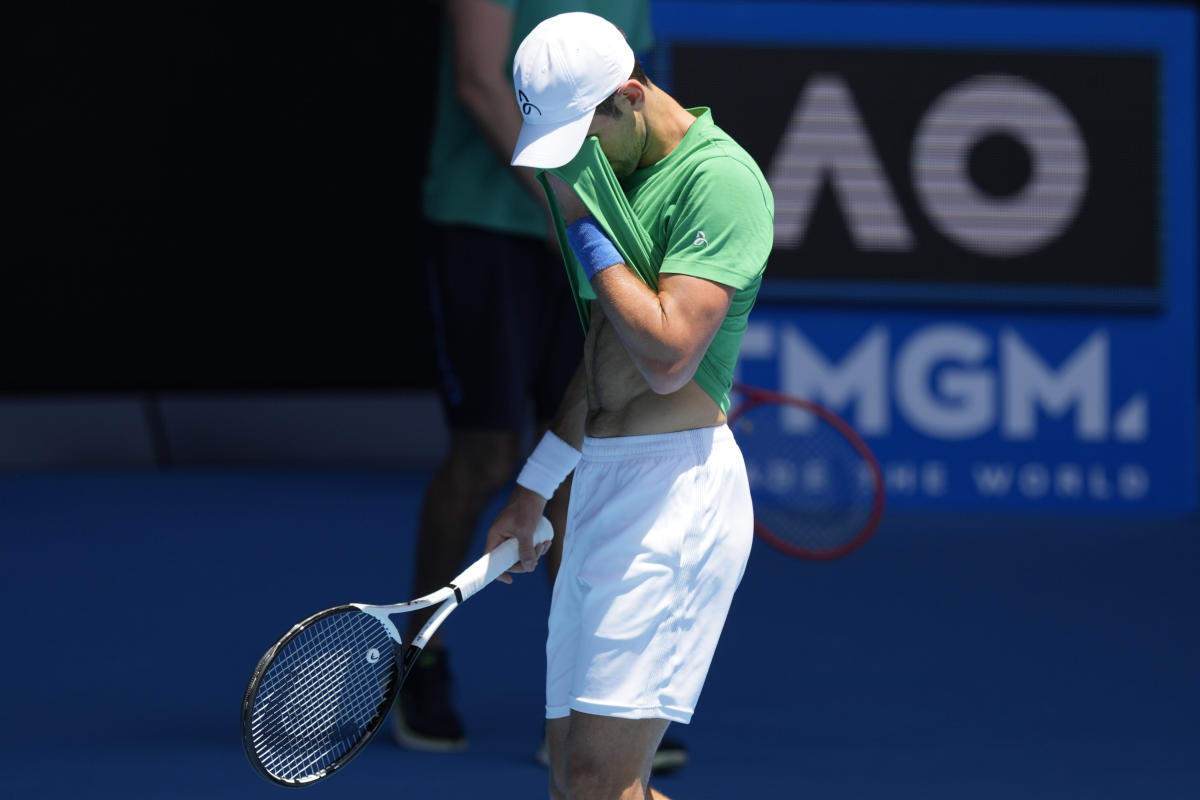 MELBOURNE, Australia (AP) — Novak Djokovic faces deportation again after the Australian government revoked his visa for a second time, the latest twist in the ongoing saga over whether the No. 1-ranked tennis player will be allowed to compete in the Australian Open despite being unvaccinated for COVID-19.

Djokovic’s lawyers were expected to appeal at the Federal Circuit and Family Court, which they successfully did last week on procedural grounds after his visa was first canceled when he landed at a Melbourne airport.

Deportation from Australia usually leads to a three-year ban on returning to the country. That would make Djokovic 37 the next time he would be allowed to compete at the Australian Open.

Hawke said he canceled the visa on “health and good order grounds, on the basis that it was in the public interest to do so.” His statement added that Prime Minister Scott Morrison’s government “is firmly committed to protecting Australia’s borders, particularly in relation to the COVID-19 pandemic.”

Morrison and Hawke are part of a conservative government which prides itself on being tough on border control.

“This pandemic has been incredibly difficult for every Australian but we have stuck together and saved lives and livelihoods. … Australians have made many sacrifices during this pandemic, and they rightly expect the result of those sacrifices to be protected,” Morrison said in a statement. “This is what the Minister is doing in taking this action today.”

Everyone at the Australian Open — including players, their support teams and spectators — is required to be vaccinated for the illness caused by the coronavirus. Djokovic is not inoculated and had sought a medical exemption on the grounds that he had COVID-19 in December.

That exemption was approved by the Victoria state government and Tennis Australia, apparently allowing him to obtain a visa to travel. But the Australian Border Force rejected the exemption and canceled his visa when he landed in Melbourne on Jan. 5.

Djokovic spent four nights in an immigration detention hotel before a judge on Monday overturned that decision. That ruling allowed Djokovic to move freely around Australia and he has been practicing at Melbourne Park to prepare to play in a tournament he has won each of the past three years.

Djokovic has held practice sessions every day since he was released from detention, posting a photo on social media late Monday of himself with his team on Rod Laver Arena.

He had a scheduled mid-afternoon practice booked for Friday on the tournament’s main show court, but switched his times to start and finish early.

Media started gathering at the vehicular entry to the building where Djokovic was reported to be meeting with his lawyers after the minister’s decision was handed down.

With his legal situation still in limbo, Djokovic was placed in the tournament bracket in Thursday’s draw, slated to face Miomir Kecmanovic in an all-Serbian matchup in the first round.

Djokovic’s supporters in Serbia were dismayed Friday after waking up to the news.

Serbian President Aleksandar Vucic accused the Australian government of “harassing” and “maltreating” Djokovic and asked whether it is just trying to score political points ahead of upcoming elections.

If deported, Djokovic is likely to return to Serbia, where his saga has captivated the public and where he has an almost iconic status and overwhelming support.

Melbourne-based immigration lawyer Kian Bone said Djokovic’s lawyers face an “extremely difficult” task to get court orders over the weekend to allow their client to play next week.

Djokovic’s lawyers would need to go before a duty judge of the Federal Circuit and Family Court, or a higher judge of the Federal Court, to get two urgent orders. One order would be an injunction preventing his deportation, such as what he won in court last week. The second would force Hawke to grant Djokovic a visa to play.

“Very rarely do the courts order a member of the executive government to grant a visa,” Bone said.

Jacqui Lambie, an influential independent senator, argued that Djokovic should be sent packing if he had broken Australia’s vaccine rules. But hours before the visa cancellation was announced, she complained about how long Hawke was taking to reach a decision.

“Why does this keep dripping out of the tap? Alex Hawke, where are you? Missing in action?” Lambie asked.

“If you can’t make a decision on Novak Djokovic, goodness me, how are you guys running the country? This is an absolute shambles,” she added.