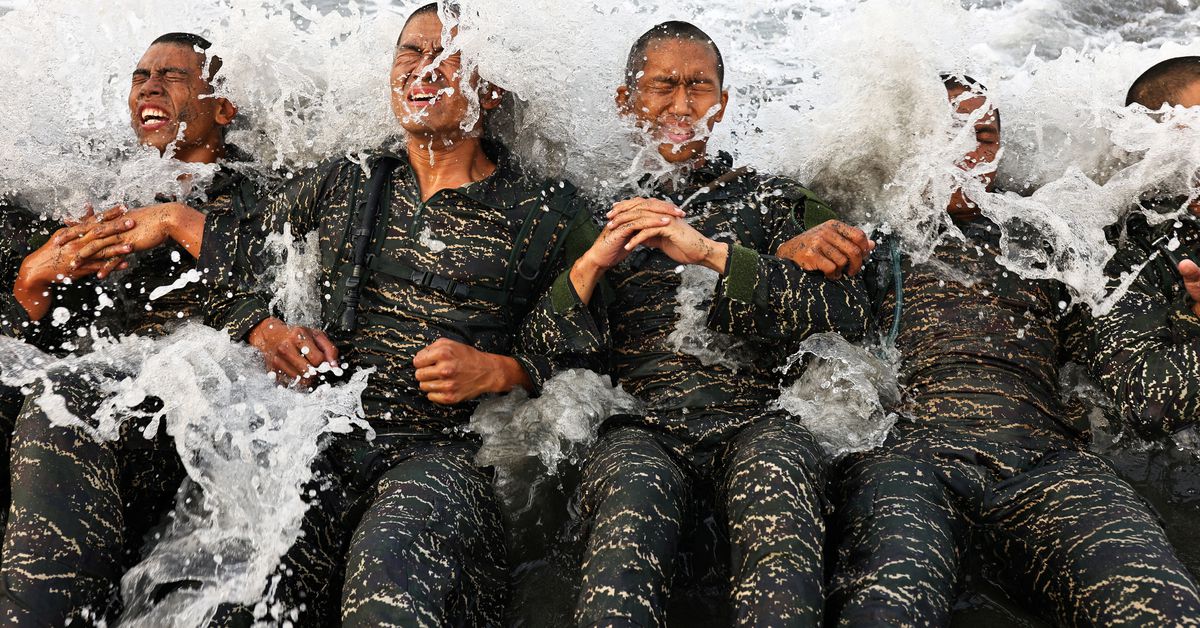 ZUOYING, Taiwan, Jan 14 (Reuters) – A chill wind whips across the Taiwan Strait as a small group of Taiwanese marines stands shivering on a remote dock in the early hours of the morning, their shorts and thin jackets drenched after a day spent mostly in the sea.

“Are you a sleeping beauty? Are you skipping out on class?” a trainer shouts at the wiry men, who have barely slept in days, as they do sit-ups and other exercises on the rough concrete floor, some fading in and out of consciousness from fatigue.

Blasts of cold water from a hose brings them to their senses.

Entry into the Taiwan navy’s elite Amphibious Reconnaissance and Patrol unit or ARP, its answer to the U.S. Navy SEALs or Britain’s Special Boat Service, is not for the faint of heart.

In the event of war with China, which claims the democratic island as its own and has stepped up its military and political pressure against Taiwan, ARP frogmen could find themselves spirited across the strait in small boats under cover of night to scout enemy locations and call in attacks.

Of the group of 31 who started the 10 week course, only 15 finished, with the closing week at the sprawling Zuoying navy base in southern Taiwan the last test, which Reuters was given rare access to witness.

“I’m not scared of death,” Fu Yu, 30, said after completing the “road to heaven”, a final obstacle course consisting of a stretch of rocks some 100 metres long over which they have to scramble on their bellies and do tasks like push ups to the satisfaction of their trainers.

“It’s a soldier’s responsibility, what we must do,” added Fu, who had previously tried and failed to complete the course.

Over six days and five nights, the volunteers to enter the ARP have to endure everything from long marches to hours in the water, with constant screaming by their instructors.

ARP trainees battle the waves while completing training exercises during the last week of a ten week program to become members of the Taiwan navy’s elite Amphibious Reconnaissance and Patrol unit, at Zuoying navy base, Kaohsiung, southern Taiwan, December 18, 2021. The trainees have to endure everything from long marches to hours in the water, with constant screaming at by their instructors. Of the group of 31 who started the program, only 15 finished. REUTERS/Ann Wang

A lot of their time is spent in the sea or swimming pools, learning how to hold their breath for extended periods of time, swimming in full combat gear and infiltrating beaches from the sea.

Every six hours they have a one-hour break. In that time they have to eat – scarfing down bulbs of garlic to boost their immune systems – get medical attention, go to the toilet and sleep.

They may only end up with five minutes of sleep, huddled together on the floor under light green blankets, awoken with shrill whistle blasts.

The aim is to give the soldiers an iron will to complete their mission no matter how difficult, and create steadfast loyalty to their comrades and the military.

The candidates are all volunteers, driven to join the special forces out of a mixture of patriotism and a desire to push their personal limits.

Wu Yu-wei, 26, said he considered it a “personal challenge” to complete the course.

“The hardest part was the timing, not being able to rest, having only 15 minutes to use the toilet, have a gulp of water, before moving on to the next section,” he said.

“The first few days are exhausting, and then you get used to it. You have to rely on your willpower and determination.”

Once across the “road to heaven” finish line, and congratulated by Marine Corps commander Wang Jui-lin, the stress of the past week is too much for some of the marines, who burst into tears in the arms of proud family members invited to see them graduate.

The trainers, all graduates of the same course, say the intention of the week of hell is not cruelty but to simulate the hardship of war, like extreme sleep deprivation, to see who has the stamina and guts to make it.

“Of course, we absolutely won’t force anyone, everyone is here voluntarily. That’s why we are so severe with them and also eliminate them strictly,” said trainer Chen Shou-lih, 26. “We won’t just wave you through only because you wanted to come.”