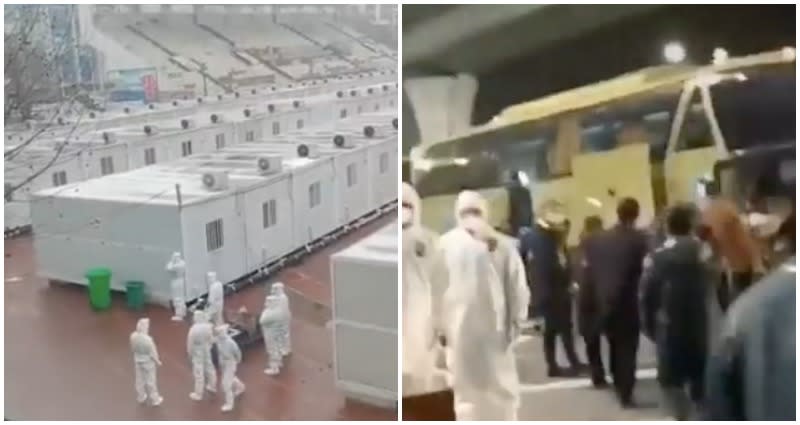 Photos and videos from Chinese quarantine camps show that government officials are isolating residents in what looks like hundreds of metal boxes.

Twenty million Chinese residents from Xi’an, Yuzhou and Anyang are being confined to their homes as a result of China’s strict “zero-COVID” policy.

Additionally, China has set up quarantine camps with hundreds of metal boxes to house infected individuals to further halt the spread of the virus, according to the Daily Mail.

Twitter user @songpinganq re-shared videos showing the rows of temporary housing and the scarce conditions inside the boxes as well as of buses transporting hundreds of people with their luggage to their quarantine camps.

Most times chinese government will take you to covid quarantine camp with bus in the middle of night.
I guess even they themselves think this behavior is a little shade,so they usually try not to get attention ( take people away in the night). pic.twitter.com/jdBaMOjIap

In the captions, the social media user alleges that pregnant women, children and the elderly are among those sent to the Xi’an camps. Workers provide the detainees with little food and unheated, tiny boxes. The infected are reportedly forced to live with little more than one wooden bed and a toilet nearby for as long as two weeks.

Those staying at the Mingde 8 Yingli housing compound say they were told just after midnight on Jan. 1 that they had to immediately go to the quarantine camp, according to BBC. Various witnesses reportedly also claimed about 30 buses transferred approximately 1,000 people to the site.

‘There is nothing here, just basic necessities… Nobody has come to check up on us, what kind of quarantine is this?’ one social media user said. “They didn’t make any proper arrangements and so they just carelessly placed us.”

The video is the latest zero-COVID controversy to have rattled Chinese users on social media. A video of a man being beaten by pandemic workers outside the camp after he left to buy steamed buns went viral over the weekend, according to BBC.

But there was also this video of a resident being beaten by anti-epidemic workers after he allegedly left his community to get steamed buns because he was so hungry. The two community workers have reportedly been detained by Xi’an police. pic.twitter.com/lxHv6zl1gF

‘There is only one China’: Nicaragua declares former Taiwan embassy belongs to China