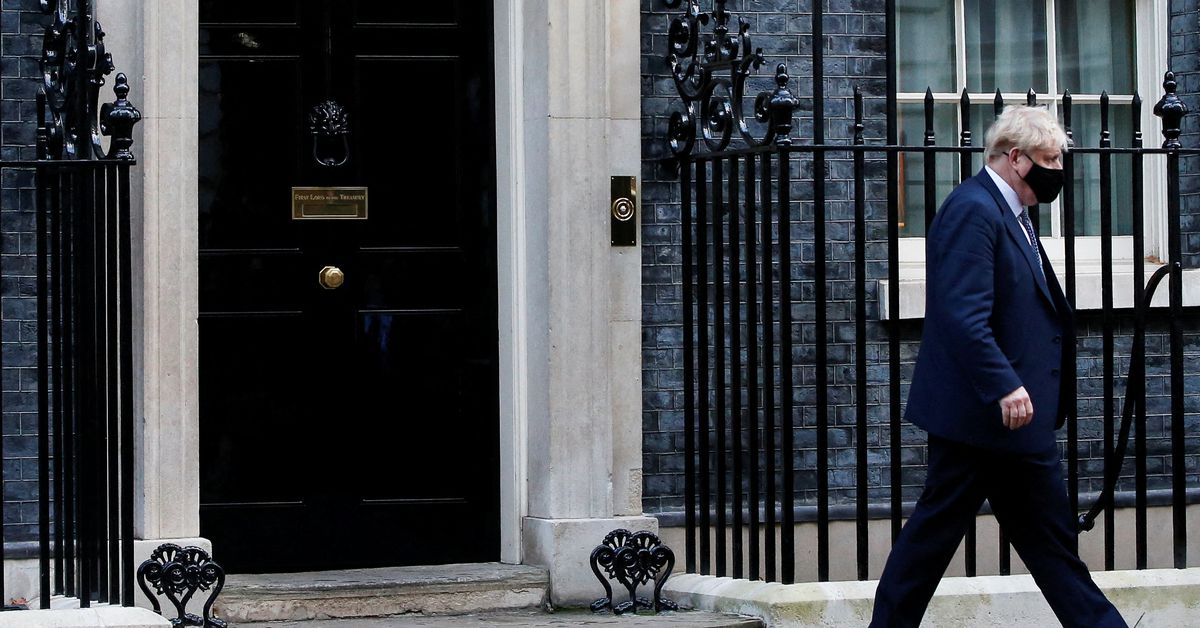 LONDON, Jan 14 (Reuters) – British Prime Minister Boris Johnson is facing a revolt by grassroots Conservative supporters who want him to resign after a series of revelations about parties held at his official Downing Street residence during national coronavirus lockdowns.

From the West Midlands to Scotland, party members – who raise funds and rally voters at election time – are turning against a man many of them had admired for his exuberance, unstuffy if sometimes messy style and his championing of Brexit.

John Strafford, 80, chairman of the Campaign for Conservative Democracy, called Johnson the worst prime minister of his lifetime and said the allegations about him attending parties during the worst health crisis in a century showed him to be reckless and irresponsible.

“People are absolutely disgusted by it. It is a sign of the arrogance of the man. The reality is that Boris is a court jester who wants to be king,” he told Reuters.

“His greatest failure is that he has no judgment, and judgment is the most important quality for any politician.”

Johnson was once the darling of the party’s grassroots members who helped secure him a landslide victory in a 2019 election, allowing him to deliver on promises to finally steer Britain out of the European Union. They also applauded last year’s rapid rollout of COVID-19 vaccines under his leadership.

But the relationship is rapidly souring under the impact of a steady stream of revelations about Downing Street’s apparent flouting of strict lockdown rules.

In the latest twist, one guaranteed to upset Conservative supporters, Johnson’s office on Friday had to apologise to Queen Elizabeth after it emerged that staff had partied in Downing Street on the eve of Prince Philip’s funeral last year, at a time when mixing indoors was banned. read more

Johnson himself was not present at those parties. However, he apologised to parliament on Wednesday for joining a gathering in the Downing Street garden on May 20, 2020, when Britain was under a strict lockdown.

While grassroots Conservative members cannot oust a leader, their views influence lawmakers and they do vote on which of the final two candidates wins the party’s top job in a leadership election. read more

A senior government official, Sue Gray, is currently investigating the claims about parties held in government buildings during the lockdowns. Her report is expected in the next few weeks.

Johnson’s supporters hope the report will stop short of saying whether he knowingly broke any rules or should resign.

But Strafford said that regardless of the report’s findings many rank-and-file members had already made up their minds.

He said his group of Conservatives passed a symbolic vote of no-confidence in Johnson last month – before the latest damaging revelations – and his WhatsApp was inundated with messages from party members saying they no longer support the prime minister.

“The only reason they are not resigning their membership is because they want to vote in the leadership election, which is now inevitable,” added Strafford.

In the Conservative stronghold of Sutton Coldfield in the West Midlands, the local party association passed a motion on Thursday calling for Johnson to stand down.

Ed Costelloe, chair of the group Conservative Grassroots, which backed him in 2019, said the party needed to force him out or face a humiliating defeat at the next national election, due by 2024.

“I am deeply disappointed, it is sad for the party, sad for the country, but the situation is diabolical,” Costelloe said.

“His chaotic personal style is such that he can’t carry on. We need a fresh start.”